A positive development in an otherwise profoundly challenging stretch for the energy industry, the week ended Friday saw gains in both oil and natural gas drilling, according to the latest numbers from oilfield services provider Baker Hughes Co. (BKR). 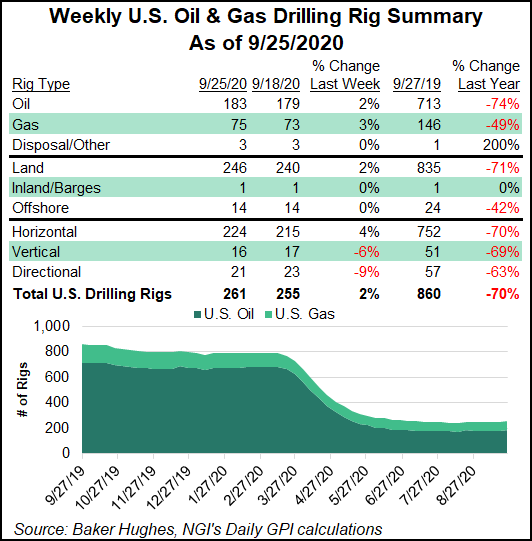 The U.S. natural gas rig count gained two units to finish the week at 75. Alongside the addition of four oil-directed rigs, the combined domestic tally climbed to 261 as of Friday, still down nearly 600 units compared to the year-ago period, according to BKR.

All of the gains occurred on land in the United States, with the Gulf of Mexico count unchanged at 14. Horizontal units increased by nine, while directional units declined by two and vertical units eased lower by one overall.

The Canadian rig count gained seven units for the week to end at 71, down from 127 a year ago. Gains there were split between three oil-directed units and four gas-directed.

The combined North American count rose 13 units for the week to end at 332, down from 987 at this time last year.

Among the major plays, it was not the Permian Basin but the Eagle Ford Shale that led the charge during the week. The Eagle Ford added three rigs, upping its total to 12, versus 62 a year ago. The Permian, meanwhile, picked up to two rigs to end with 125, off from 414 a year ago.

Also among plays, the Marcellus and Utica shales in the Northeast each added one rig to their respective totals.

Broken down by state, the gains in the Permian and Eagle Ford helped lift the rig count in Texas by seven week/week. The Lone Star State ended up with 113 overall, versus 418 a year ago. New Mexico dropped two rigs from its total, falling to 41, versus 109 at this time last year.

Elsewhere among states, Ohio and Pennsylvania each added a rig during the week, while Alaska and West Virginia each dropped one, BKR data show.

A watershed agreement in April to slash oil production by the Organization of the Petroleum Exporting Countries and its allies, aka OPEC-plus, has begun to achieve its intended effect of rebalancing an oversupplied global crude market, the U.S. Energy Information Administration (EIA) said recently.

The quarterly survey by the Dallas Fed, as it’s known, said 66% of oil and gas executives queried across the Eleventh District believe domestic oil production has peaked, while 34% said it has not. The Eleventh District encompasses northern Louisiana, most of New Mexico and Texas, which are home to the Permian and Eagle Ford, as well as the Haynesville Shale.