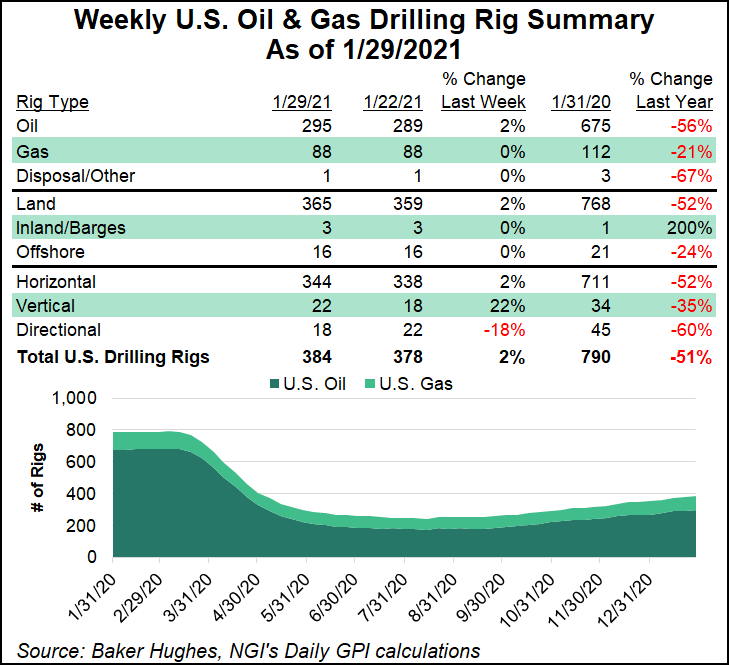 On the strength of growth in the oil patch, the combined U.S. rig count rose six units to 384, finishing the period 406 units shy of the 790 rigs active at this time a year ago, according to the BKR numbers, which are based in part on data provided by Enverus.

The Canadian rig count increased two units to 174 for the week, with oil-directed drilling accounting entirely for the net gains there. The Canadian count ended the period 73 units shy of the 247 rigs active at this time last year.

Broken down by play, the increased activity in the U.S. onshore for the week was concentrated in the Permian Basin, which added four rigs overall to up its total to 192, versus 406 a year ago. Also among plays, the Williston Basin added one rig for the week to end with 12, versus 53 in the year-ago period.

Broken down by state, Texas saw a net increase of seven rigs week/week, offsetting a three-rig decline in New Mexico. North Dakota, Oklahoma and Wyoming each added one rig, while one rig exited in Alaska, BKR data show.

The latest moves out of Washington, DC, earlier in the week signaled challenging regulatory headwinds moving forward for the U.S. oil and gas industry. In an executive order published Wednesday President Biden directed the Department of the Interior (DOI) to pause new oil and natural gas leasing on federal lands and offshore waters.

The order prompted criticism from the industry, including Houston-based Murphy Oil Corp. CEO Roger W. Jenkins, who called the move by the new administration “misguided” as an effort to curb greenhouse gas emissions.

Meanwhile, oil and gas supply and demand appears now to be heading in opposite directions, setting the stage for a potential upcycle in the industry, RPC Inc. CEO Richard A. Hubble said Wednesday.

“We have greater visibility into the near-term activity levels than in the recent past,” Hubble, who runs the Atlanta-based oilfield services giant, said during a conference call. “Commodity prices have improved, and our customers have a more constructive outlook.”