Infrastructure constraints and a slow pace of project approvals have hampered natural gas production growth, but rising output is coming – albeit at a slower pace and higher price, industry executives said earlier this month in Houston. 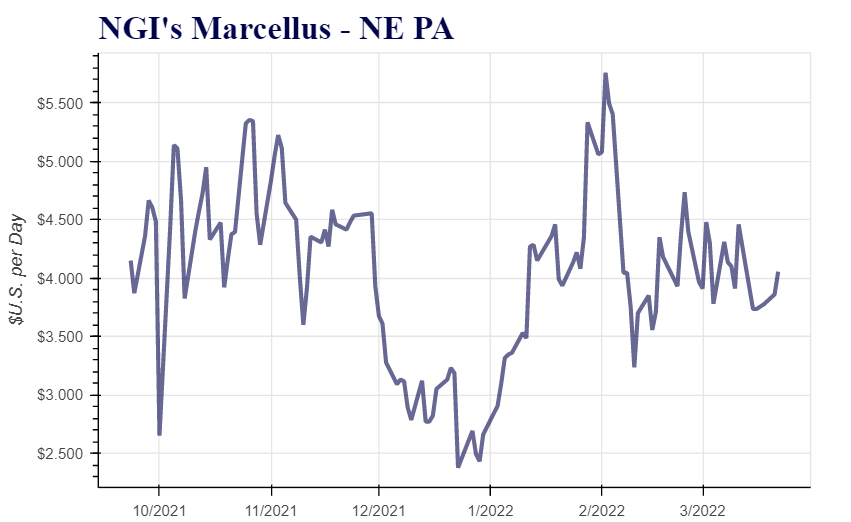 Goldman Sachs’ Samantha Dart, head of natural gas research, said dry gas growth was the “single biggest contributor” of domestic growth in 2018-2019. However, bottlenecks have once again emerged after an earlier buildout in Appalachia, where the Marcellus and Utica shales accounted for 34% of all U.S. output in the first half of 2021.

The constraints, combined with a difficult political environment for building pipelines to move supply to demand centers, mean the gas market “can’t really count on that to drive growth significantly at really low prices,” Dart said on a panel at CERAWeek by S&P Global. “You have to go to the next best guy. That’s going to be Haynesville producers.”

Chesapeake Energy Corp. CFO Mohit Singh, who shared the panel with Dart, said drilling a well essentially exposes a company to a long duration project against the backdrop of fluctuating commodity prices. This is a topic of an “ongoing, intellectual debate” within the Oklahoma City-based E&P. For now, Chesapeake plans to “keep our head down,” staying within budget and delivering the volumes it has promised.

The E&P has set its sights on the Eagle Ford, Haynesville and Marcellus shales this year, with 85% of its capital spending directed to the “highest return opportunities” in those plays. Mingh last month noted that Chesapeake would continue to chase any opportunity to fill any available pipeline capacity in the Marcellus. The company also would jump at the chance to grow volumes if circumstances arose.

However, Singh acknowledged that outspending cash flow, as was done in years past to accommodate production growth, was a business model that “did not work” given the cyclical nature of the oil and gas business. “You have to stay disciplined…there’s been a lot of, I would say, discipline that has been coached into the operators…that you need to exercise better capital allocation and capital discipline.”

Looking For Regulators To Do Their Part

Williams’ Chad Zamarin, senior vice president (VP) of Corporate Strategic Development, said infrastructure projects need to be permitted more efficiently in order to ease constraints. While Appalachian bottlenecks have been ongoing, pipeline capacity is expected to tighten in the Permian Basin in the next few years. Some estimates put the region maxed out on gas capacity as early as next year, with no new projects announced.

Williams canceled its planned Constitution Pipeline to move Appalachian gas after an arduous eight-year battle to gain approval. Proposed in 2012, the 124-mile pipeline would have carried 650 MMcf/d from Pennsylvania. Williams, citing regulatory delays, also received a two-year extension to build and place into service its proposed Northeast Supply Enhancement Project.

Zamarin noted that infrastructure in the Haynesville, in particular, “is amazing. It’s very flexible.” However, most of it initially was built to move gas from the Gulf Coast to the Northeast, prior to Appalachia’s buildout. The industry has spent the last decade basically “re-piping the entire footprint of our energy infrastructure” in order to move gas from new supply basins to new demand centers.

That said, Williams is starting to see renewed activity in some of the “secondary basins” that had been in decline over the last couple of years, according to the executive. “There’s more discipline, but there is a response to price.”

One reason some of the secondary basins are responding to the higher gas price environment, according to Zamarin, is because they don’t have the same constraints that are hampering growth in places like Appalachia. “They’ve got existing capacity that can be brought to use,” he said.

Zamarin noted that the largest rig count by basin over the past year has been the Anadarko Basin in the South Central Oklahoma Oil Province, which “has come back in a very dramatic way. We hear a lot about it. You hear about the Haynesville, you hear about Appalachia, the Permian – and those will be the major balancing basins – but the U.S. has a tremendous resource that we can bounce across many different suppliers.”

Where Is Future Gas Demand Coming From?

It isn’t only gas reserves that are abundant in the United States.

Sempra’s Brian Lloyd, regional vice president of external affairs, said demand is growing in the Lower 48, especially for pipeline exports to Mexico and liquefied natural gas (LNG) exports. Sempra earlier this month noted that it is seeing a “dramatic increase” in market interest for its LNG export projects under development. The company is developing the Energía Costa Azul Phase 1 and Vista Pacifico projects on Mexico’s Pacific Coast, and the Cameron Phase 2 expansion in Louisiana, on the U.S. Gulf Coast.

Sempra for years has cautioned that an LNG capacity shortage was looming by the middle of the decade, and now “is coming sooner than we thought.”

One of the critical long-term signals for the U.S. gas industry, according to Lloyd, is getting infrastructure built “to move gas to the coast and ultimately to places of the world that don’t have indigenous supplies and are now struggling to meet their economic growth and lower carbon initiatives.”

When asked if U.S. gas could help Europe with the shortfall in Russian supply in the wake of sanctions following its invasion of Ukraine, Lloyd said the United States “absolutely” could do that over time. However, pipeline permitting needs to be done more efficiently, along with LNG export permits. LNG projects require long lead times and intensive capital investment before they are sanctioned.

“This is a set of technologies that we know we have and can deploy,” he said. “At the same time that we’re solving energy security, we’re still improving the climate aspect in Europe. If we’ve got that goal and that mindset for this type of effort, by the end of this decade, absolutely, we can have our allies in Europe have a fundamentally different paradigm that they have found themselves in.”

Zamarin noted that it can take four years in some cases to receive a permit for a pipeline that could be built in six to nine months. “We’ve got to fix this. This has to be a new call to action in the United States for infrastructure.”

Meanwhile, power demand has “persistently surprised to the upside” in the face of higher prices, Dart noted. This suggests that there may be some “roadblocks” to substituting coal for power generation.

Dart said there were utilities that relied additionally on coal for their power needs this past winter. However, the coal industry is one in which “demand wasn’t growing for years.” Even though the price incentives were there to switch, there were bottlenecks. At the same time, there was a concern among coal mining companies of choosing to increase capital expenditures (capex) to boost production capacity “only to fall on my face a year later?

“So what we saw as a response was yes, coal production increases, but moderate … they were adding the cheap stuff,” Dart said. “Let’s get more trucks. Let’s get more people. But I’m not really going to spend more capex to increase capacity.”

Given the slow expected pace of gas production growth, Dart said gas-to-coal switching “remains relevant in balancing the gas market.” With U.S. thermal coal stocks finishing 2021 at the lowest level in more than 40 years, “we think we can only balance at a relatively high level.” She said a gas price “close to $4.00” would likely balance the market, “even though forwards are even beyond that.”

Dart pointed out that coal generation in Northwest Europe is down more than 30% versus five years ago. This allowed European gas prices “to skyrocket a lot faster” when gas supply was tight. Until Russia invaded Ukraine, the expectation was that the region was going to remove all coal capacity by 2030 at the latest.

“Now, think about gas trying to balance with nothing to substitute against,” Dart said. “Mandated shutdowns – and at least we don’t have that here – can create a lot of unintended issues that I don’t think policymakers there have thought through.”

Asked whether the coal retirements planned in the United States could lead to higher volatility for gas prices, Dart said should U.S. gas “really go tight, prices are going to look for what they need to do to get more demand to drop, and industrial demand destruction is easily in the teens.

“That issue that we’re balancing – maximizing gas-to-coal substitution and the lack of additional levers of substitution beyond that at a moderate price level – create some convexity in price risks from here.”