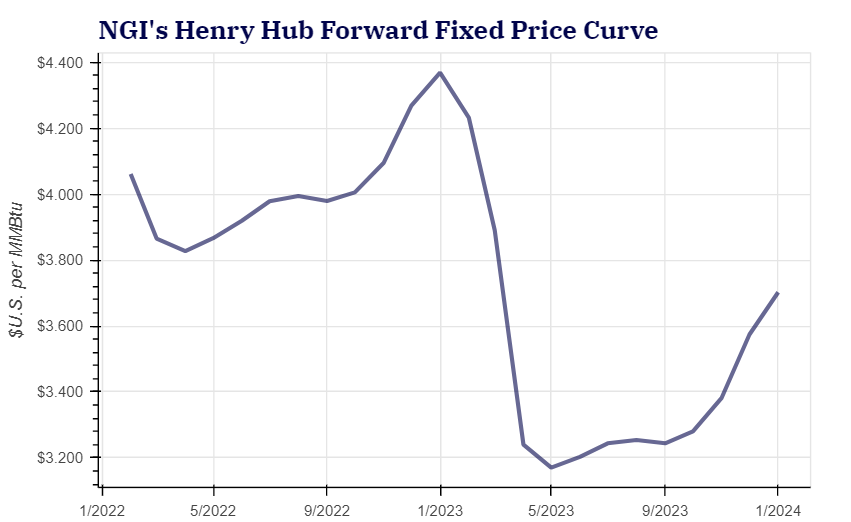 Attempting to predict the direction of natural gas prices is much like predicting the weather. A week out, the weather forecaster or gas price prognosticator might hit the number on the nose. Two weeks out, a Winter Storm Uri look-alike could plunge temperatures below freezing with 24 hours’ notice, and gas prices could jump to record highs.

Still, everybody tunes in to the weather forecasts, while the natural gas market is listening closely for which way that price wind is blowing. This year is no different.

In an updated forecast that stretches to 2023, the EIA earlier this month laid out a vision of rising U.S. gas production and exports, alongside moderating domestic prices.

Where Is Henry Hub Headed?

Henry Hub spot prices averaged $3.91/MMBtu for 2021, the EIA noted in the most recent Short-Term Energy Outlook. This year and 2023 should bring slightly lower pricing for the national benchmark, with average prices of $3.79 for 2022 and $3.63 next year.

U.S. production levels may be tighter than some expect, though, which could increase prices.

Still, Hillman was “surprised” that gas production had not “recovered more than it has. It’s another reason this market is tighter than people are giving it credit for. If we continue to see this tightness persist over the next few months, prices can definitely go higher.”

That ties into the “LNG story,” which is “very much a timing issue,” Hillman said. “Will incremental LNG demand come online before production rises to meet it?”

Cheniere Energy Inc. produced its first LNG last November from the sixth train at the Sabine Pass complex in Louisiana. Once operations ramp up, as expected by the end of March, it could add 760 MMcf/d.

“Train 6 is nearly there, and LNG demand is already at around 13 Bcf/d,” Hillman said. Meanwhile, the Calcasieu Pass export project, also in Louisiana, “will be online soon too” and the arbitrage “is wide open, so there is no reason for cargo cancellations.”

There are “upside risks this winter” for LNG, according to BofA analysts, “with limited inventories and spare capacity.” LNG cargo congestion in the Panama Canal, which allows faster shipping to some overseas markets, is seen supporting the spread between Asia’s Japan-Korea Marker, or JKM, and the European Title Transfer Facility, or TTF.

“A warmer-than-expected start to the winter and a surge in Lower 48 production took the most extreme winter tail risks off the table, leading to the destruction of winter risk premium across the forward curve,” the BofA analysts noted.

The end-of-March storage forecast, marking the unofficial end to winter pulls, was increased by BofA to 1.6 Tcf. Analysts expect 3.7 Tcf to be in storage at the end of October.

Even though more U.S. coal plants are set to be shuttered this year, gas is unlikely to reap the benefit, according to BofA.

“Despite over 15 GW of coal closures expected next year, the highest annual total since 2015, we do not see natural gas power generation increasing in 2022,” the BofA team said. “Renewable capacity should expand by roughly 28 GW next year, reducing the call on thermal generation to a new low.

“This translates to gas-fired power generation averaging 30.3 Bcf/d in 2022, down 0.5 Bcf/d year/year. Meanwhile, with 3.5 Bcf/d of year/year production growth on the horizon, we see lower prices ahead…”

Wells Fargo analysts, led by Nitin Kumar, updated their U.S. gas price outlook in mid-December too. The in-depth analysis is forecasting that U.S. gas prices “can be sustained” between $3.25 and $3.50 this year through 2025.

Similar to BofA, Wells Fargo foresees U.S. gas production increasing, up by 4 Bcf/d at year’s end. Still, that’s lower than an earlier prediction by Wells Fargo, which had forecast domestic output climbing by 6 Bcf/d this year.

“We expect strong growth near term,” through the first half of this year. There have been notable increases in rig activity in the “gassy” onshore plays since last August, Kumar said, as Henry Hub spot prices rose. “Beyond 2022, we expect growth to moderate to a pace of 0.5-0.6 Bcf/d between 2023 and 2025.”

The Permian Basin is expected to continue to shoulder the burden in driving U.S. gas supply growth, Kumar said. “However, in 2022, we expect growth from ‘secondary’ basins, including the San Juan, Gulf Coast and Rockies, given recent pick-up in rig activity in response to higher gas prices…Gas production from the Appalachia and Haynesville, which accounted for 53% of U.S. onshore gas production in 3Q2021, is expected to be relatively flat between 2021 and 2023.”

The analyst team at Raymond James & Associates Inc., led by John Freeman, said gas prices averaging around $4.00 “still seems possible” this year. However, investors, market observers and consumers “may be looking at the natural gas market differently this year” following the dramatic rise in gas and electricity prices in 2021, particularly in Europe.

“We now think it will take a Henry Hub price of $4.00 to balance the U.S. market in 2022, versus our earlier forecast of $4.50,” Freeman said. The public exploration and production companies are still focused on their oil acreage, too, which has kept a lid on overall gas supply growth.

Rystad Energy’s Kaushal Ramesh, senior gas markets analyst, in a recent note said Henry Hub prices have “demonstrated resilience recently, holding above $4.00, driven by an increase in gas demand across all sectors and a sustained uptick in LNG feed gas to over 12 Bcf/d.”

The near-term U.S. weather forecast is mixed, but “gas prices could find support in the event of a cold snap in the East and worries about short-term production disruptions,” he said.

Market sentiment of late has been “cautiously bearish” overall, with “tepid demand in Asia and robust LNG imports into Europe, but a bullish overhang persists that could limit the downside to prices.”

U.S. energy executives are fairly optimistic about the direction of gas prices this year, according to a 4Q2021 survey by the Federal Reserve Bank of Dallas. Respondents, whose companies are based in Texas, northern Louisiana and southern New Mexico said they expect Henry Hub prices to average $4.06 at the end of this year. The survey was conducted Dec. 8-16, with 129 executives weighing in. Spot gas prices averaged $3.76 during the survey period.

“But Europe is not out of the woods yet. Cold weather in Asia could see local utilities for deliveries in February and March, limiting LNG availability to Europe. A cold winter in Europe could add up to 10 billion m3 (353 Bcf) of additional gas demand, pushing storage inventories close to zero before the end of March.”

In addition, NS2 commissioning “could be stopped altogether if tensions between Russia and Ukraine escalate, as the German government has recently warned.” The Biden administration also is wary of Russia’s plans.

“Normal winter weather, including in Asia, and visibility on Nord Stream 2 commissioning would push prices down, although demand for storage (and high carbon prices) will maintain prices above $15/MMBtu,” Di Odoardo said. “But a cold winter in Europe and Asia, alongside continued uncertainty about commissioning of Nord Stream 2, could see prices increase further throughout 2022. Get ready for another bumpy year ahead.”