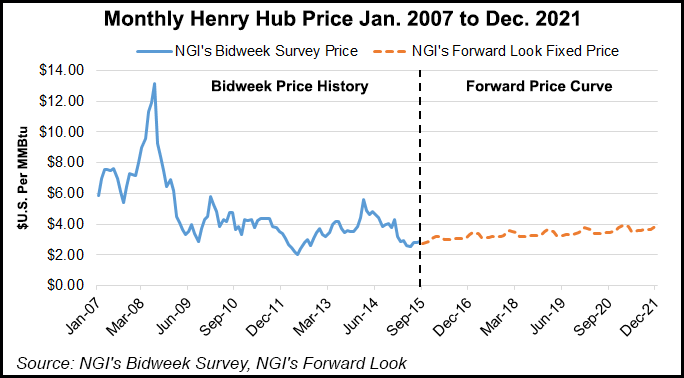 The glut in supply beginning last year, both from gas-focused drilling and associated gas production from oil wells, led to an erosion in prices to a low of around $2.61/MMBtu in April from a high of close to $6.00 in February 2014, said Standard & Poor’s (S&P) credit analysts Michael Tsai and Paul B. Harvey.

Even though the number of active gas-directed rigs in the United States has fallen by about 73% since early 2012, dry gas output has increased over the past three years from about 25 Bcf/d to 41 Bcf/d. The supply momentum has been led by the Marcellus Shale, but it is increasing rapidly with Utica Shale production, too, the analysts said.

It’s all in the efficiencies. They pointed to the Energy Information Administration (EIA) Drilling Productivity Report issued in July, which said new gas wells were forecast to be producing 68 Mcf/d more per rig in the Marcellus between July and August to average 8.35 MMcf/d, while Utica gas output was seen rising 186 Mcf/d to 7.06 MMcf/d (see Shale Daily, July 16). Haynesville Shale wells were forecast to average 5.97 MMcf/d, 20 Mcf/d more per rig from July to August.

“New well production per rig in the Marcellus was about 4 MMcf in June 2012, which means each rig in the region today can produce about as much as two rigs did just three years ago,” said Tsai and Harvey.

Storage also is pointing to abundant gas supplies, with the EIA projecting that gas inventories this year will reach 3,919 Bcf, near the five-year high, by the end of injection season.

“If storage capacity becomes scarce before the withdrawal season in late fall, we could see the oversupply going to market and further pressuring prices,” the S&P analysts said.

Low gas prices should stimulate demand in the second half of this year, but prices likely are going to remain flat, they said. S&P currently is projecting U.S. gross domestic product growth of 2.3% in 2015, 2.7% in 2016 and 2.9% in 2017. The growth would support increased energy consumption, while retiring coal plants for power generation also should spur more gas demand. Analysts also cited more gas going to the petrochemical industry and additional gas exports to Mexico.

Even so, higher demand won’t be able to overtake surging supplies.

“If natural gas prices rise, it would make basins — other than the Marcellus and Utica — that have higher cost structures, such as the Haynesville Shale, more economical, likely boosting production in response,” said the S&P analysts.

Forward natural gas markets seem to confirm S&P expectations. The price of gas at the Henry Hub, as measured by NGI’s Forward Look, only reaches as high as $3.93 as far out as December 2021. From now until the end of 2021, the Henry Hub is currently expected to average only $3.36 while still seeing dips into the sub-$3.00 area into 2016.

Last week, Goldman Sachs reduced its forecast for U.S. gas prices through the rest of this year (see Daily GPI, July 27). New York Mercantile Exchange prices are forecast to average $2.75/MMBtu in the second half of the year, with 2016 prices seen averaging $3.00/MMBtu. Bank of America Merrill Lynch last week said it expects 2015 prices to average $2.85/MMBtu, rising to $3.90 in 2016 as the market rebalances.