Natural gas price volatility hit an all-time record earlier this year and remains elevated on weather-driven demand and soaring LNG exports, among other factors, according to the Energy Information Administration (EIA). 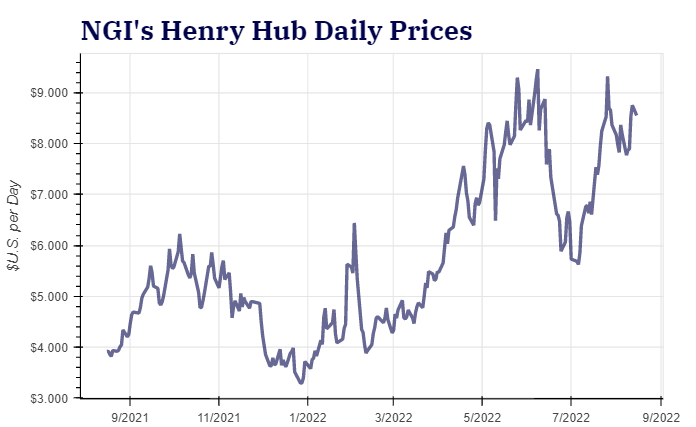 EIA said volatility, a measure of how much daily prices change, reached its highest level in 20 years in February. The 30-day historical volatility of U.S. natural gas prices, based on the Henry Hub front-month futures prices, averaged 179% in February, compared to the five-year average of 48%, the agency said in its weekly gas note.

The agency noted that volatility is typically higher during the first quarter due to heating demand for natural gas. EIA said the heightened volatility during the first three months of year was mainly related to weather-driven demand fluctuations, a decline in natural gas production late last year, the drop in storage inventories and record U.S. liquefied natural gas exports to Europe amid the continent’s need to fill a shortfall in Russian imports.

The U.S. gas market has grown increasingly volatile in recent years as LNG exports have grown exponentially and as natural gas has taken an increasing share of the nation’s power stack. LNG’s meteoric rise in particular has reinforced baseload demand – or the minimum level that must be met on a daily basis across the country.

LNG exports from Lower 48 states started in 2016. Today, export capacity stands at about 13 Bcf/d. Stronger baseload demand has created less flexibility in the market, making it tougher to respond to the incremental demand that comes with extreme weather or other anomalies.

“As the U.S. exports a larger percentage of its domestic production in the form of LNG, U.S. gas prices will likely only become more volatile over the short-to-medium term, especially as the global gas market remains tight,” said NGI’s Patrick Rau, director of strategy and research.

In recent years, NGI has reported record spikes at various trading points across the country of up to $200 amid severe cold snaps.

EIA said natural gas price volatility fell to an average of 56% in April, but it has since jumped, averaging 109% in July. Warmer weather has influenced Henry Hub prices. However, the explosion and outage at Freeport LNG that knocked 2 Bcf/d of demand offline in June has moved the market at various points since.

EIA noted that Henry Hub futures prices fell 39% between June 10 and June 30, shortly after the Freeport facility was shuttered. Hotter temperatures in July helped to offset demand loss from Freeport and prevented storage inventories from growing, which helped keep upward pressure on prices.

Rau noted that U.S. natural gas is now one of the more volatile commodities in the CRB index, a basket of energy, metals and agricultural products. He attributed that partly to a lack of infrastructure investment, but added that developments abroad are also having an impact.

Exports, both overseas and to Mexico, have continued to grow, setting the stage for further volatility, particularly as international markets grow more interconnected. By 2025, U.S. LNG exports could surpass 18 Bcf/d if the Golden Pass and Plaquemines LNG projects come online.

According to Bloomberg data annualized volatility at Henry Hub is currently at 70%. That compares to 80% for the Title Transfer Facility, 83% for the Japan-Korea Marker and 97% for the National Balancing Point.

“U.S gas prices are now highly correlated with world markers like TTF, NBP and JKM, and movements in those can cause the Henry Hub to move in kind,” Rau said. “Gone are the days when the U.S. was insulated from the rest of the world.”