New domestic natural gas-fired generation, along with some renewables, will replace the power supply lost with the retirement of 35 GW of coal-fired and nuclear generation plants over the next five years, according to Moody’s Investors Service. 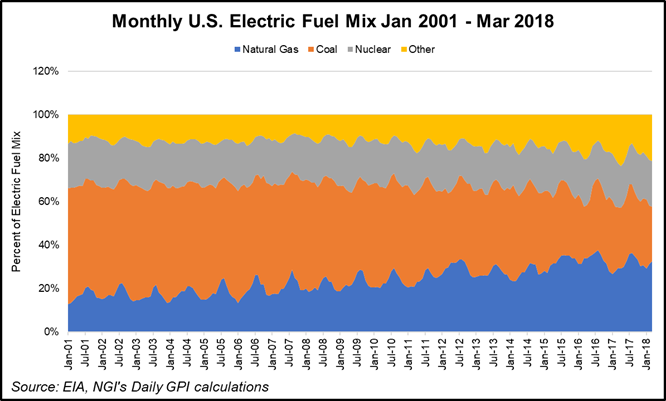 The impact of the planned retirements should be offset by what Moody’s analysts estimated as about 32 GW of new power generation, mostly gas-fired plants, they said in a report issued last Friday. “Furthermore, approximately 72 GW of renewables are in advanced development or under construction with the majority slated for 2020,” a spokesperson said.

From the credit ratings perspective, continuing excess generation capacity will be a “negative credit driver” and particularly for operators in deregulated markets, such as PJM in the Northeast. PJM has 5,400 MW of nuclear power and 8,000 MW of coal-fired plants set to retire from now through 2021.

Lurking in the background is an unfinished U.S. Department of Energy (DOE) proposal to keep some of the scheduled nuclear and coal-fired plants operating. Its prospects could upset the analysis if the White House asserts national security reasons for keeping some of the old plants open.

“Given the uncertainty surrounding the actual plan and the timing of the implementation, we assume that the planned coal-fired and nuclear power plants will be retired as scheduled in this report,” Moody’s noted in regard to the DOE proposal.

Moody’s analysis projected a continuing decline in the net carbon dioxide (CO2) emissions. The coal-fired plants retiring should cut CO2 emission by 5%, but 2% of CO2 would be gained through the nuclear plant retirements. Overall, there should be a “modest reduction” of about 3% in CO2 from the net effect of the closures.

There should be no material effect on U.S. power capacity, with 32 GW of generation capacity under construction over the next five years, and 72 GW of renewables either in advanced development or under construction, according to Moody’s.

Currently, natural gas accounts for 42% of U.S. power generation, while coal sits at about 24% with renewables at 12%. Nuclear and hydro power each account for 9%. In terms of CO2 emissions, coal accounts for 69% while natural gas is responsible for 29%.

Aside from the fuel mix changes, the electricity market is expected to be negatively impacted by declining power usage, according to Moody’s, which cited PJM as experiencing declining demand for the last several years.

“Efficiency programs and conservation efforts have gained momentum, reducing electricity usage,” the report noted. PJM’s summer peak loads have declined 1.2% for the past two years and should decline by more than 2% per year during the next five years.