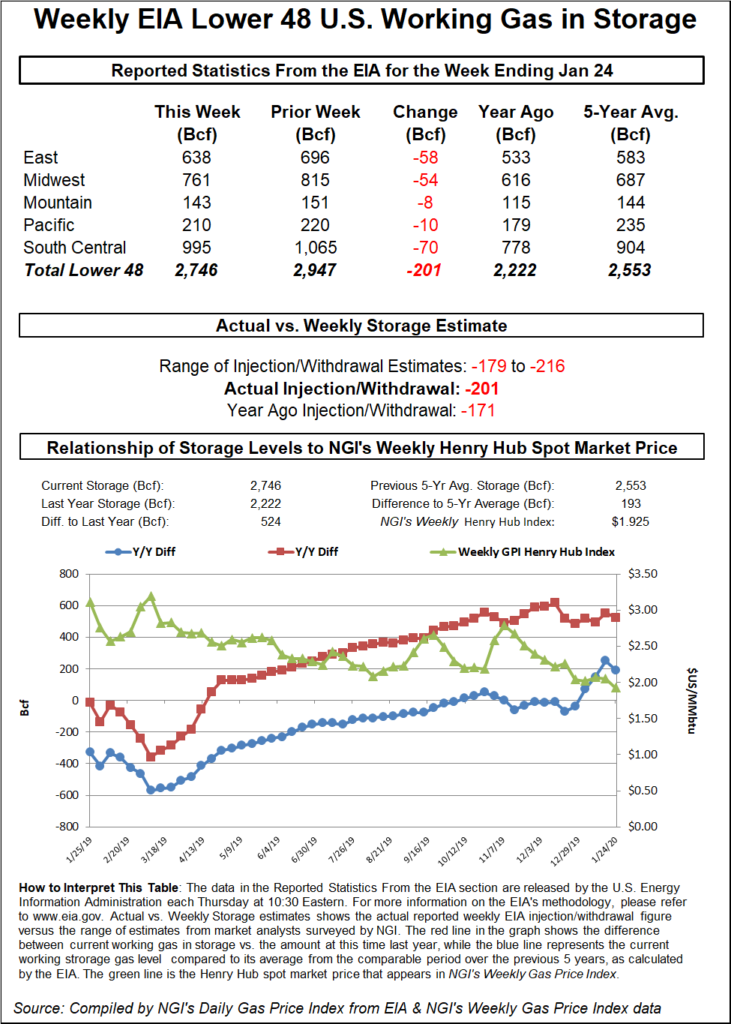 In the spot market, discounts in the Northeast and in West Texas helped to pull NGI’s Spot Gas National Avg. 7.5 cents lower to $1.690.

With the overnight European weather data “strongly backing away from the idea of an upper-level ridge around Alaska” and thus “keeping alive the seemingly endless warmer regime,” bears were able to take control heading into Thursday’s trading, according to Bespoke Weather Services.

“Prompt-month prices were pushed to new lows despite an EIA number that, while being on par with expectations, confirmed that the supply/demand balance is quite tight,” Bespoke said. “Given what we see in the data this week, we should see a strong number next week as well, at least on a weather-adjusted basis.

“…The problem remains that the warmer pattern is still keeping demand low enough to overwhelm the tight balances, and as long as that is the case, we can continue making new lows.”

The EIA reported a 201 Bcf weekly withdrawal from U.S. natural gas stocks, to the higher side of expectations, but a futures market already depressed by mild winter weather reacted with disappointment.

The 201 Bcf withdrawal, recorded for the week ended Jan. 24, compares with a 171 Bcf withdrawal recorded in the year-ago period and a five-year average pull of 143 Bcf. The number also comes in slightly above consensus, with major surveys having pointed to a decrease of around 195-197 Bcf.

A Bloomberg survey Wednesday had produced a median prediction for a 197 Bcf withdrawal. Responses to a Wall Street Journal survey had averaged minus 195 Bcf, while a Reuters survey had also landed on a 195 Bcf pull. Predictions had ranged from minus 179 Bcf to minus 216 Bcf. NGI’s model had predicted a 210 Bcf withdrawal.

With this week’s print potentially the largest of the withdrawal season, perhaps bulls had been hoping for a more robust number from EIA.

Shortly after EIA’s print came out, Enelyst managing director Het Shah wrote during a live discussion on the energy chat platform that this week’s report offered “no real surprises.”

The Desk’s John Sodergreen saw it as a “big number” under the circumstances, with the 201 Bcf pull occurring “despite low demand across the globe, weak prices and no weather anywhere.”

By region, the South Central posted the largest weekly withdrawal at 70 Bcf, including 31 Bcf pulled from salt stocks and 39 Bcf from nonsalt. The East withdrew 58 Bcf on the week, while 54 Bcf was pulled in the Midwest. The Pacific recorded a 10 Bcf weekly withdrawal, while 8 Bcf was withdrawn in the Mountain region, according to EIA.

Looking at the demand picture, Genscape Inc. analysts expect exports to Mexico to see “step increases” in February and March. February exports are projected to rise to slightly above 5.5 Bcf/d, a roughly 0.2 Bcf/d sequential increase over January volumes.

“The February increase will be driven by normal seasonality and ongoing production declines and demand growth, though all of these factors are rather modest,” Genscape senior natural gas analyst Rick Margolin said. “The February versus January comparison is a bit exaggerated as maintenance in January cut into what would have otherwise been normal flow rates.

“In March, we expect another step increase, with exports averaging more than 5.6 Bcf/d. This is based upon the above factors plus the anticipated startup of the Wahalajara pipeline system. This pipe network will connect West Texas/Permian gas to central Mexico pipelines, creating the opportunity for Mexico to replace” liquefied natural gas volumes from the Manzanillo terminal “and potentially replace South Texas-originated gas with cheaper molecules from Waha.”

Potentially exacerbating the congestion in the Permian region Thursday, Transwestern declared a force majeure because of a mechanical failure at its Station 4 compressor in Klagetoh, AZ. The operator notified shippers that it planned to reduce capacity through its Mainline Thoreau West segment from 1.24 Bcf/d to around 1.05 Bcf/d until next Tuesday.

Elsewhere, South Texas hubs generally saw small discounts, in line with the price action playing out over much of the middle third of the Lower 48 amid some unseasonably mild temperatures expected heading into the weekend. Tres Palacios slid 2.0 cents to $1.860.

“Temperature-wise, aside from a few cold spots in the Northeast and Southern Plains” Thursday morning, “milder-than-normal conditions are expected to continue across much of the Northern Tier in contrast with cooler-than-normal conditions for the Deep South under a split flow pattern,” the National Weather Service said. “Actual temperatures could top 60 degrees in parts of the northern High Plains on Saturday.”

Temperatures dropped low enough in New York to prompt Millennium and Columbia Gas to issue operational alerts that went into effect for Thursday’s gas day, Genscape analysts noted. However, the events — an operational flow order affecting eastbound flows through Millennium’s Wagoner West system and a potential transport critical day on Columbia — were expected to be “short-lived with the combination of the weekend and warming temperatures,” the analysts said.

The modest price increases from the chilly temperatures in the Northeast this week also proved short lived; the rising mercury brought hefty discounts throughout the region in Thursday’s trading. After averaging as high as $2.355 earlier in the week, Algonquin Citygate dropped to just $1.810 on average Thursday, down 37.5 cents on the day.