A clearer picture was emerging on Wednesday of a massive natural gas shortage facing Mexico amid the extreme cold gripping Texas, Mexico’s main source for the fuel. 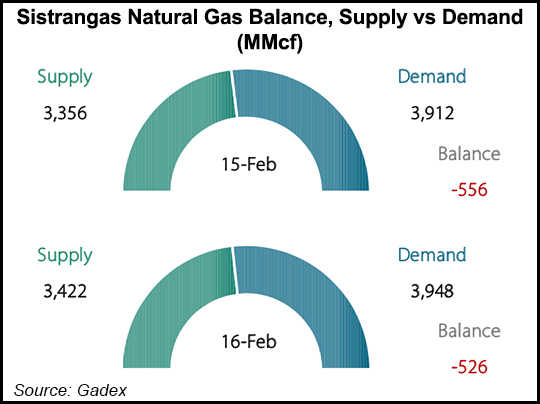 The supply shortfall was punctuated by a late-breaking announcement Wednesday from Texas Gov. Greg Abott that he was prohibiting the sale of natural gas produced in Texas outside of the state, and ordering producers to instead supply gas to local power generators in order to curb the extended power outages plaguing the state amid a severe cold snap.

The order will remain in effect through Feb. 21, Abbott said during an afternoon news conference.

Abbott said that about 19,800 MW of gas-fired generation remained offline in Texas because of either mechanical issues or insufficient gas supply, necessitating the order to keep locally produced gas within state lines.

Abbott’s announcement was met with disbelief from observers of the energy market in Mexico, which relies on U.S. gas supply, mostly from Texas, for up to 80% of its natural gas needs. Gas-fired plants account for about 60% of power generated in Mexico.

Cenagas said that due to the arctic air mass in the southern United States, injections into the Sistrangas remained below the amounts scheduled, restricting the availability of the molecule for system users, a situation “outside the control” of the operator.

“The polar vortex is indeed taking its toll on Mexico’s natural gas market,” Genscape Inc.’s Ricardo Falcón, natural gas analyst, told NGI’s Mexico GPI on Wednesday. He said that based on Genscape’s estimates, U.S.-to-Mexico pipeline gas exports had averaged 4.7 Bcf/d over the last six days, about 1.1 Bcf below the average of the preceding 30 days.

Apart from the Sistrangas, Falcón highlighted that most of Mexico’s major privately-owned pipelines had declared critical alerts as well due to the pervasive supply restrictions, operational flow orders (OFOs) and force majeures north of the border.

The privately-owned systems include, but are not limited to, Fermaca’s Waha-to-Guadalajara system, as well as pipelines owned by TC Energy Corp. and Infraestructura Energética Nova (IEnova), Falcón said. These systems were commissioned by anchor shipper Comisión Federal de Electricidad (CFE), Mexico’s state-owned power utility, to ensure the supply of gas from the U.S. to feed its power plants amid declining domestic gas production by state oil company Petróleos Mexicanos (Pemex).

Falcón said, “We believe that industrial users may face the strongest short-term impact under the Cenagas contingency, given the supply cuts imposed by the system operator.”

Cenagas published a list of more than 80 large natural gas users, mostly from the industrial segment, who were being asked to reduce their consumption by a combined 258.7 MMcf/d as part of the alert.

Rather, priority is determined by the type of transport service contracted by the end-user, with primary firm capacity holders getting first dibs, followed by holders of secondary firm and interruptible capacity.

Falcón added that Mexico’s Baja California state has been “the most noteworthy in terms of unusual activity” during the cold snap.

He explained that liquified natural gas sendout from Sempra Energy’s Energía Costa Azul import terminal had reached record highs since Friday, while TC’s North Baja pipeline system – which normally transports gas from the United States to Mexico at the Ogilby, CA border crossing – was flowing gas in the opposite direction, which had not occurred in a decade.

CENACE said Wednesday morning that electricity service had been restored to 99.79% of affected users, due to the restarting of power plants by CFE.

CFE said it had secured the purchase of four liquefied natural gas (LNG) cargoes to arrive at its Altamira and Manzanillo terminals, and that as of Tuesday, the terminals were in the process of sending out 450 MMcf/d to five of CFE’s gas-fired power plants.

In addition, CFE said its coal and fuel oil-fired plants were ramping up to fill the void left by the missing gas supplies.

The situation in Texas was far from resolved on Wednesday, with independent system operator Electric Reliability Council of Texas (ERCOT) instructing local utilities to shed 14,000 MW of load as of 9am, equal to the demand of about 2.8 million households.

ERCOT said that about 46,000 MW of generation capacity had been forced offline during the extreme winter weather event, comprising 28,000 MW thermal and 18,000 MW wind and solar capacity.