Natural gas exports via pipeline from the United States into Mexico grew 11.2% year/year during the first nine months of 2018 to reach 1.25 Tcf, or 4.6 Bcf/d, according to a report from the U.S. Department of Energy (DOE). 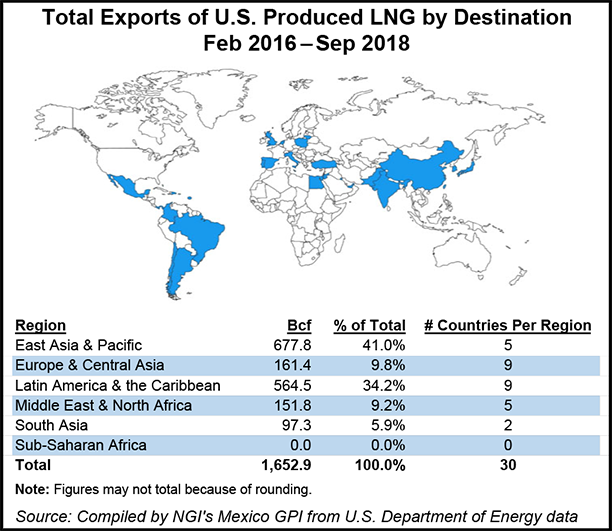 Meanwhile, DOE said U.S. exports to Canada shrank by 15.2% to 587.6 Bcf in the same comparison, but LNG shipments and Mexico deliveries more than offset the loss.

In 3Q2018, the United States exported gas to Mexico through a large number of exit points using short-term authorizations, but “over 49% of the gas transited two points” in South Texas, Rio Grande City and Roma. Rio Grande City is the largest point of export to Mexico.

Smaller volumes of gas were exported through longer-term authorizations, according to DOE.

About 70% of total pipeline and truck exports in the third quarter of 2018 went to Mexico.

Rising LNG and Mexico gas exports are part of a longer-term trend that will soon make the United States an energy exporting powerhouse. After more than 60 years as a net energy importer, the country is on track to become a net energy exporter of gas and oil by as early as next year, according to the U.S. Energy Information Administration (EIA).

According to a reference case and all alternative cases in EIA’s Annual Energy Outlook 2019, the United States will be a net energy exporter by 2020 and remain so through at least 2050.

The country became a net exporter of natural gas in 2017 for the first time since 1958. In EIA’s reference case, the U.S. gas trade, which comprises pipeline and truck exports, as well as LNG, to Mexico and Canada, will be increasingly dominated by LNG exports. However, pipeline shipments to Mexico will continue to see steady growth through 2050.

Despite the increase in LNG, gas prices should remain comparatively low during the period, EIA said, leading to increased consumption across end-user sectors and rising exports.

Exports into Mexico also depend on the southern neighbor’s gas pipeline buildout.

Mexico is also a major destination for U.S. LNG exports.

In the third quarter of last year, Mexico accounted for 52.5 Bcf of U.S. LNG exports, second only to South Korea’s 55.7 Bcf consumption of U.S LNG.