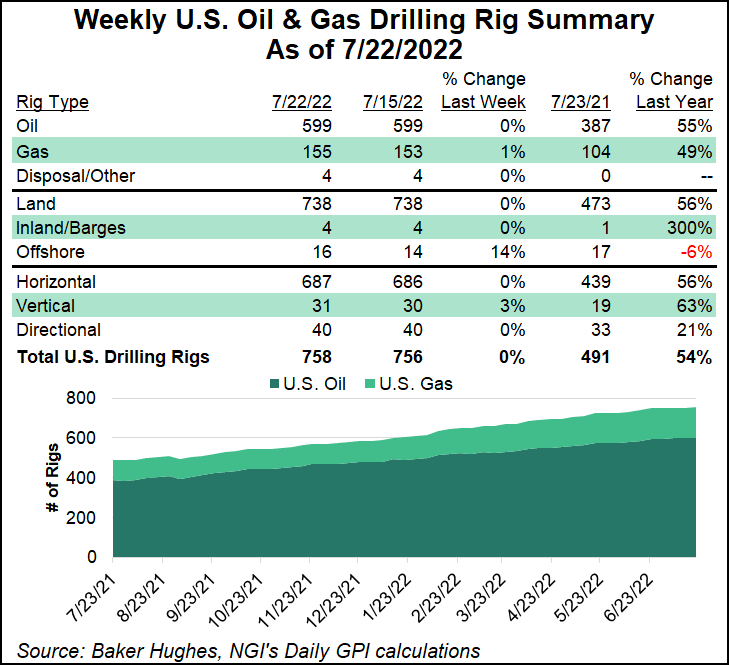 Total oil-directed rigs were unchanged domestically for the period at 599. The 758 active U.S. rigs as of Friday compares with 491 rigs running in the year-earlier period, according to the BKR numbers, which are partly based on data from Enverus.

Offshore rigs increased by two overall for the period, with the Gulf of Mexico count rising one unit to end the week at 14. Total land rigs held steady at 738. Domestic gains included one horizontal rig and one vertical rig, with directional drilling unchanged week/week.

The Canadian rig count rose four units to 195 overall during the period, up from 149 a year ago. Changes included a net gain of five natural gas-directed rigs, partially offset by a one-rig decline in oil-directed drilling.

Broken down by major drilling region, the Cana Woodford led with an increase of two rigs week/week, while the Eagle Ford Shale and Granite Wash each added one rig. The Ardmore Woodford posted a two-rig decline for the period, while one rig exited from the Permian Basin, the BKR data show.

Counting by state, Alaska and Louisiana each added two rigs to their respective totals, while New Mexico and Utah each dropped a rig for the period.

“Overall, we remain very positive on the outlook for natural gas,” Baker Hughes’ CEO Lorenzo Simonelli told analysts. “We also believe that a significant increase in natural gas and LNG infrastructure investment is required over the next five to 10 years in order to make natural gas a more affordable and reliable baseload fuel source that can be paired with intermittent renewable power sources.”

Simonelli said Bake Hughes maintains its view that “we are at the beginning of another constructive” liquefied natural gas cycle, particularly for projects in the United States.

After climbing to a 2022 high of 12.1 million b/d in June, U.S. output fell to 11.9 million b/d for the period ended July 15, according to the Energy Information Administration. That marked the second straight weekly drop of 100,000 b/d, the agency said.