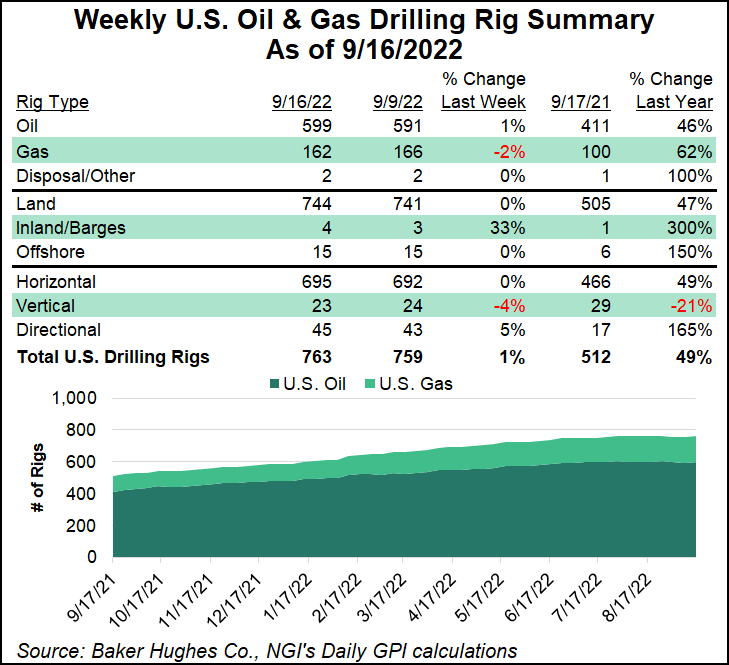 The 763 active U.S. rigs as of Friday compares with 512 rigs running at this time last year, according to the BKR numbers, which are based partly on data from Enverus.

Canada added six rigs week/week, all oil-directed. The Canadian count finished the period at 211, up from 154 a year ago.

Counting by major drilling region, the Permian led with an increase of three rigs week/week, raising its total to 343, up from 259 in the year-earlier period. The Cana Woodford added two rigs, while the Eagle Ford Shale added one. On the other side of the ledger, the Williston Basin saw one rig exit overall during the period.

In the state-by-state count, Texas picked up five rigs overall, while Louisiana added one. New Mexico and North Dakota each dropped one rig from their respective totals, the BKR data show.

Production for the period ended Sept. 9 was even with the previous two weeks at 12.1 million b/d, EIA said in its Weekly Petroleum Status Report. That kept output near the 2022 high of 12.2 million b/d reached earlier in the summer, but it was still about 1 million b/d below the pre-pandemic peak reached in early 2020.

Exploration and production (E&P) companies have been cautious about raising output quickly because of political and investor pressure to focus more on renewable energy and share buybacks. Now, amid stubbornly high inflation that threatens to tilt the U.S. economy into recession and dampen energy demand, E&Ps have added reason to hold the line on production, analysts say.