A coalition of 24 natural gas companies that are members of Our Nation’s Energy Future Coalition (ONE Future) beat its methane intensity goal by 67% in 2019, according to an annual report published by the organization. 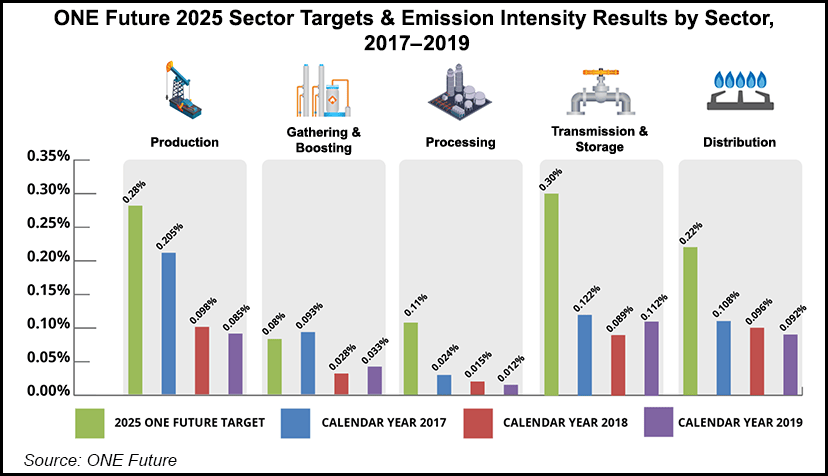 In the report, ONE Future’s member companies in 2019 registered a methane intensity number of 0.334%, beating the targeted 1% reduction in methane emissions by 2025. That’s a level that studies show minimizes impact on the environment. Members agree to measure their emissions and track their progress over time according to reporting protocols approved by the Environmental Protection Agency.

Meanwhile, overall production by the companies increased 32% and deliveries to customers rose by 58%, ONE Future said. In addition, the 2019 results included seven more companies than the inaugural 2018 report.

“Our members have consistently delivered better than estimated improvement in methane emissions reduction for the last three years and that proves that our efforts are not just working but are sustainable,” said ONE Future executive director Richard Hyde.

ONE Future started with only eight companies in 2014 with a focus to collectively achieve a science-based average rate of methane emissions across their facilities equivalent to 1% or less of total natural gas production. In 2017, they registered a methane intensity number of 0.552%.

The coalition continues working to ensure the future of natural gas as a long-term sustainable fuel and that objective will be assured as additional players in the natural gas value chain continue to step up and embrace the benefits of reducing methane emissions.

“We understand that methane emission reduction, when implemented on a flexible performance-based approach selected by each company, is not just good for the environment, but is also good for the natural gas industry, its employees, customers, communities and investors,” Hyde said.