An inaugural report by a coalition of U.S. oil and natural gas exploration companies and pipeline operators shows that the group is ahead of the curve in reducing gas emissions across the value chain, already surpassing a goal to reach a 1% methane intensity number by 2025. 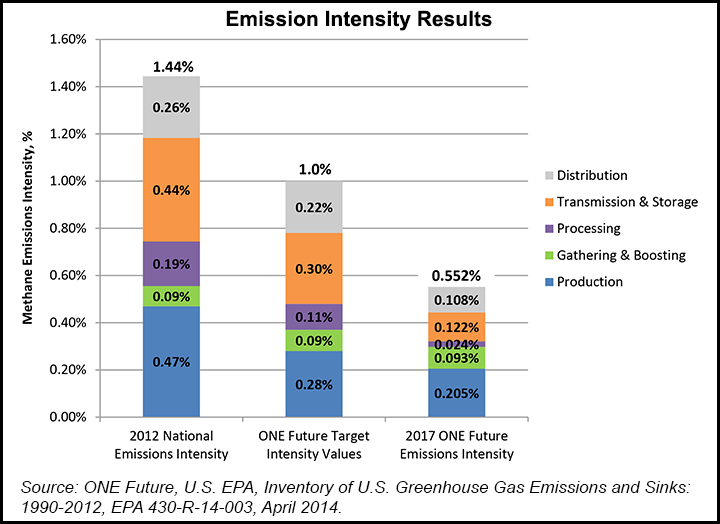 Our Nation’s Energy Future (ONE Future), which started with eight companies in 2014 with a goal to implement a performance-based approach to the management and mitigation of methane emissions, registered a methane intensity number of .552% in 2017.

The report, issued earlier in November, “validates that through targeted investment in abatement technologies, we can significantly reduce methane emissions across the natural gas supply chain,” Executive Director Richard Hyde said. “We are demonstrating that natural gas can indeed meet the growing energy needs of our country in a sustainable manner, and as our coalition continues to grow, we look forward to helping new members across the country achieve their methane reduction goals.”

Using uniform reporting protocols approved by the Environmental Protection Agency (EPA), the data was independently reviewed by the National Energy Technology Laboratory and Innovative Environmental Solutions. The original goal of 1% established by the founding members was based on the best available data at that time, which resulted in a national methane emission intensity rate of 1.44%, the coalition said.

ONE Future’s goal was developed “to achieve an ambitious average rate of methane emissions across the entire natural gas value chain of 1% or less of the methane portion of gross natural gas produced (methane intensity) by 2025.”

The coalitions’ data represents a “geographically diverse and material share” of the U.S. natural gas supply chain, it said. Its member companies, which include recent additions Berkshire Hathaway Energy Pipeline Group and Noble Energy Inc., utilize capital to employ a host of mechanisms to reduce emissions, including upgrading and replacing pipeline infrastructure as well as actively seeking and repairing system leaks.

To demonstrate credible and measurable results, members agree to measure their emissions and track their progress over time according to EPA-approved reporting protocols, ONE Future said.

A more detailed look at the data shows that the production sector, which consists of the gas exploration, wells producing gas (including oil wells producing gas) and equipment located at the well site associated with gas production, reported a methane intensity number of .205%.

That value reflects the implementation of various types of methane reduction activities including voluntary leak surveys and repair programs to identify and fix equipment leaks at above-ground production sites, among other measures.

ONE Future members operate in 11 of the 19 major production basins across the country and account for about 10% of total gas production, 32% of gas transmission miles and 9% of gas distribution.

Methane emission reductions have been an overarching goal among oil and natural gas companies in recent years, with several imposing their own targets. In September, 13 of the biggest global producers agreed to target by 2025 a 20% reduction in the average methane intensity of aggregated upstream operations to below 0.25%. Achieving the agreed intensity target of 0.25% by the end of 2025 would reduce collective emissions by 350,000 metric tons/year, compared to the baseline of 0.32% in 2017, according to the Oil and Gas Climate Initiative.

During the summer, a consortium led by Cheniere Energy Inc., Chevron Corp., Equinor ExxonMobil Corp. and Pioneer Natural Resources Co. said it plans to advance methane science to better combat global emissions from the natural gas value chain from production to end-use. The Collaboratory for Advancing Methane Science would pursue scientific studies that focus on methane emissions detection, measurement and quantification, with the goal of finding opportunities for reduction.