An extraordinary surge in freezing temperatures across northern Asia, coupled with liquefied natural gas (LNG) delivery interruptions, are triggering a surge in prices in key U.S. export destinations such as China, Japan and South Korea. 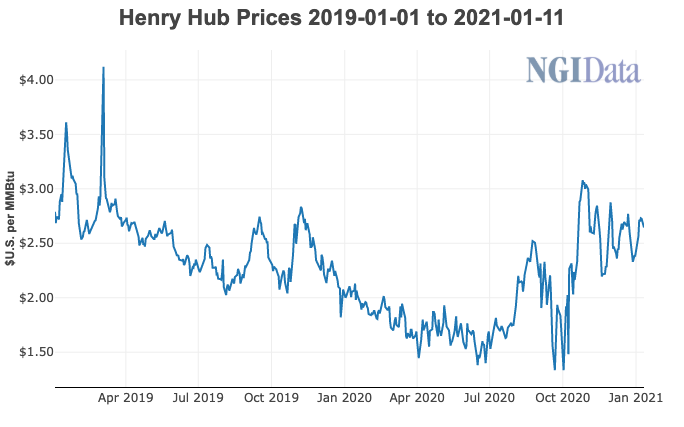 At the same time, European storage levels are drawing down quickly, and the result is mounting demand for U.S. LNG that could drive up prices at the American benchmark Henry Hub in 2021, according to an analysis Tuesday by Tudor, Pickering, Holt & Co. (TPH).

LNG market tightness “is sending shockwaves around the world,” the TPH analysts said. “While Henry Hub is limited in its ability to participate in the current rally, the aftershocks are expected to drive U.S. prices north of $3.25/MMBtu this summer and $3.50 by year-end.”

The analysis dovetailed with the Short-Term Energy Outlook released Tuesday by the U.S. Energy Information Administration (EIA). Government researchers expect prices at Henry Hub to average $2.03/MMBtu in 2020. The U.S. benchmark price is forecast to rise to an annual average of $3.01/MMBtu this year and an average of $3.27/MMBtu in 2022.

While maintenance challenges are currently limiting slots through the Panama Canal and temporarily curbing U.S. export capabilities, the strong demand from Asia is expected to persist, according to TPH.

With European destinations also wrestling with harsh winter conditions and competing for LNG imports, the analysts expect U.S. LNG exports to prove strong in coming quarters and U.S. stockpiles to shrink notably in the second and third quarters. That could push the market into undersupply and force up prices substantially.

The looming possibility for a polar vortex in late January – a cold snap that develops in the atmosphere above the North Pole and sends harsh blasts of freezing temperatures throughout the Northern Hemisphere – could put further upward pressure on gas prices. A polar vortex could drop temperatures in North America as well as Europe and Asia.

“Extreme cold in Asia combined with 7% of LNG supply being offline for various reasons has led to record imports and prices in the major Asian markets,” the TPH analysts said. “The knock-on of this is all flexible cargoes are being directed to Asia and, as a result, European LNG imports are down 5 Bcf/d year-over-year and accelerating.

“With Europe relying on storage to plug the gap,” they added, “we forecast European storage drawing down to 1.15 Tcf by the end of winter, 10% below the five-year average and an impressive 900 Bcf below last year. But the final ripple in this chain of events is higher U.S. LNG utilization as we expect Europe to import record volumes over the summer to replenish storage levels. We see the call on US LNG being 10.1 Bcf/d through” the second and third quarters, equal to 92% utilization.

The TPH analysts see the export demand driving peak storage in the United States down to 3.2 Tcf, 14% below the five-year average, “putting storage in a precarious position heading into next winter.” Prices should rise substantially in response, they said, “to incentivize sufficient gas to coal switching and normalize storage levels.”

Separately, analysts at Raymond James and Associates Inc. estimated gas futures could reach $4.00/MMBtu by the end of 2021. In addition to LNG demand, they noted steep declines in 2020 production levels that will take time to reverse and an expectation for a normalization in 2021 commercial and industrial demand as the U.S. domestic economy further recovers alongside coronavirus vaccination programs underway.

“In our view, the transition to a relatively normal demand environment in the coming year paired with significant domestic natural gas production declines sets up quite well” for higher prices, the Raymond James analysts said.