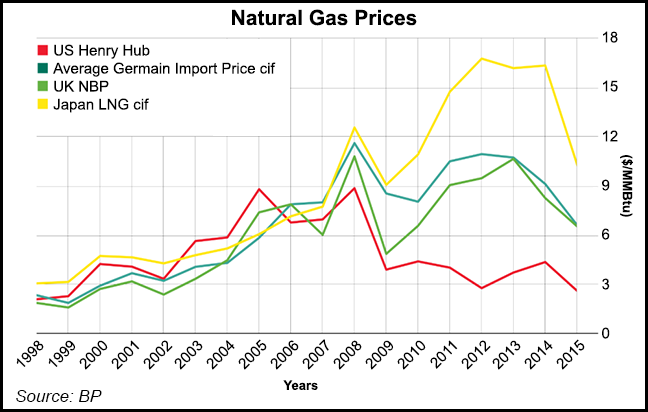 Chief economist Spencer Dale joined Group CEO Bob Dudley in London to outline the 65th edition of the BP Statistical Review of World Energy. The annual publication has traced developments in global energy markets since 1951, when coal provided more than half of the world’s energy and the price of oil was around $16/bbl (in today’s prices).

“Remarkably, the share of oil in global energy then was almost identical to its share today, at a little over 30%,” Dudley said.

What’s changed most profoundly, and what he and Dale stressed repeatedly, are the technology advances in the energy arena, which have boosted the range and availability of fossil fuels and alternatives. That technology, a lightning bolt for the unconventional revolution, also has unlocked profound energy efficiencies, which ironically has been a drag on consumption.

“This is truly the age of plenty,” Dale said. The U.S.-led revolution in onshore gas and oil production helped lift technically recoverable resources by 15% from 2014.

The United States set new record highs, both for gas and oil production last year, retaining its position as the world’s largest producer of gas, oil, renewables and nuclear power. Domestic gas production was 74.2 Bcf/d, while U.S. gas consumption, representing 31% of energy demand, also set a new record high at 75.3 Bcf/d. According to BP, the country also remained the world’s largest consumer of gas at 23% of global consumption.

U.S. coal consumption last year declined by 57 million tons of oil equivalent (mtoe) to 396, the largest decline in the world. Domestic renewables in power (3% of consumption) increased by 5 mtoe, and the United States remains the world’s largest consumer of renewable energy. Hydro (3% of consumption) fell for the fourth consecutive year. Meanwhile, domestic carbon dioxide emissions from energy use fell by 2.6%, faster than the 10-year average of 1.1%.

“The U.S. shale revolution has unlocked huge swathes of oil and gas resources,” Dudley said. “And rapid technological gains have supported strong growth in renewable energy, led by wind and solar power. These advances meant that, despite the weakness of energy demand, oil, natural gas and renewable energy all recorded solid growth in 2015.”

Global gas consumption rose by 1.7%, up significantly from 2014’s anemic 0.6% increase, but it still was sharply below the 10-year average of 2.3%. A mild winter in North America and Europe were to blame for the sputtering output, Dale said.

As with oil, gas consumption growth worldwide was below average in the developing nations, rising 1.8% and accounting for 53.5% of global demand. However, unlike some previous years, demand was above average at 1.5% in the OECD, the countries that make up the Organisation for Economic Co-operation and Development.

The United States accounted for the largest growth increment of the OECD countries, rising 3% year/year. European Union demand — likely to rely more on liquefied natural gas (LNG) imports in the future — jumped 4.6% from 2014. Meanwhile, global natural gas production grew by 2.2% from 2014, more rapidly than consumption, but below its 10-year average of 2.4%.

As with consumption, the United States, where output rose 5.4%, recorded the largest growth increment, with Iran and Norway also recording significant increases in production. Growth was “above average” in North America, Africa, and Asia Pacific. European Union gas production once again fell sharply, off 8%, with the Netherlands (minus 22.8%) recording the world’s largest decline. Large volumetric declines were also seen in Russia (minus 1.5%) and Yemen (minus 71.5%).

The worldwide gas trade also rebounded in 2015, rising by 3.3%, with pipeline shipments climbing 4%, driven by growth in net pipeline exports from Russia (7.7%) and Norway (7%). The largest volumetric increases in net pipeline imports were in Mexico (44.9%), as the United States began to deliver more gas to southern markets.

Overall energy consumption increased by 1.1% in 2015, about flat year/year, but growth came at a much slower pace than the 10-year average of 1.9%. Growth in gas, oil and renewables was at the expense of coal, which last year saw its largest decline on record, with its share within primary energy at the lowest level since 2005.

Much lower commodity prices also were key as the energy markets underwent an attitude adjustment.

“These price declines played a key role in prompting adjustments in energy markets: boosting demand in some markets, most notably oil; curtailing supply and shifting the fuel mix in others,” Dudley said. “The extent of this adjustment bodes well for the future stability of our industry. The combination of slow demand growth and a shift in the fuel mix away from coal toward natural gas and renewable energy had important implications for carbon emissions.

“In particular, carbon emissions from energy consumption are estimated to have been essentially flat in 2015, the lowest growth in emissions in nearly a quarter of a century, other than in the immediate aftermath of the financial crisis.”

Overall, the oil and gas industry is “living through a period of profound change,” he said. “But that is nothing new. The past 65 years have seen huge changes to the global energy landscape. Our task as an industry is to take the steps necessary to provide the energy to meet the world’s growing demand and ensure our sector remains resilient to the many factors that may buffet us in the near term.”

Alternative energy production rose by 3.6% year/year in 2015, with renewables in the power sector growing by 15%. However, it’s still a small share of the global energy mix at 2.8%, Dale said. Asked how quickly that market share may grow, he reminded the audience that it could take 20 years — or longer before renewables even captured 20% of the global market.

The decline in energy investments over the past year is a worrisome sign, but the implications of the pullback may not be known for a few more years, Dale said. Investments in oil and gas resources fell by around 25% from 2014, or by $160 billion. To date this year investments are down by another $50 billion or so.

“You’ll have to go back to the late 1970s to see such a sharp fall in investments,” he said.