The United States is officially emerging as a net natural gas exporter in 2017, with exports exceeding imports in three of the first five months of the year, the Energy Information Administration (EIA) said Tuesday. 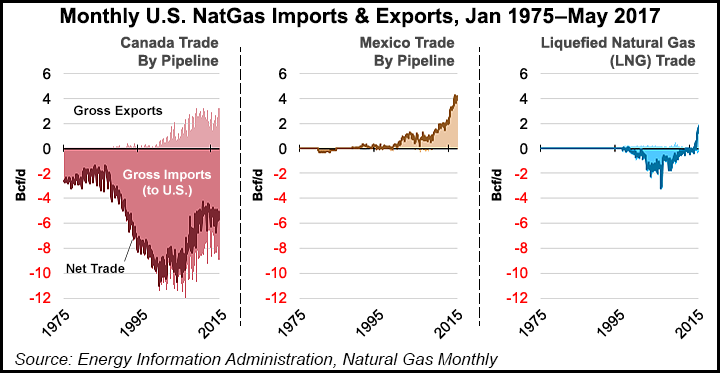 The United States was a net gas exporter in February, April and May, according to the latest EIA data.

“The United States has been a net natural gas importer on an average annual basis for nearly 60 years,” EIA said. “Declining pipeline imports from Canada, growing natural gas pipeline exports to Mexico and increasing exports of liquefied natural gas (LNG) are all contributing to the nation’s ongoing shift toward being a net exporter.”

Mexico gas exports reached near-record levels through May, averaging 4.04 Bcf/d, compared to an average 3.78 Bcf/d for full-year 2016, EIA said. Mexican exports have been increasing since 2010, when pipeline exports across the southern border averaged 0.91 Bcf/d.

Amid declining domestic production, Mexico has been deregulating its natural gas market as pipeline operators are expanding to get gas to the border. NGI has been tracking the growth in pipeline exports to Mexico and recently debuted the Mexico Border NatGas Flow Tracker.

The story has been similar for LNG, with Cheniere Energy Inc. last year shipping the first cargoes from its Sabine Pass terminal in Louisiana to mark the start of LNG exports from the Lower 48. Sabine Pass averaged a record 1.96 Bcf/d of exports in May, EIA said.

Numerous domestic LNG export projects are in development, some on track and some not. Dominion Energy Inc. confirmed recently that the Cove Point liquefaction project on the Chesapeake Bay in Lusby, MD, should enter service later this year. However, Sempra Energy management recently said the start-up date for the Cameron LNG facility in Louisiana, has been pushed to 2019 because of issues related to engineering, procurement and construction.

“Sabine Pass has commissioned three liquefaction trains, with the fourth train coming online in the next few months,” EIA said. “The United States still imports LNG from overseas, primarily at Everett, MA, but these volumes averaged only 0.20 Bcf/d over the first five months of 2017.”

Cheniere management said during a conference call Tuesday the Sabine Pass Train 4 is expected to produce its first commissioning cargo later this week.

The growth in U.S. exports marks the end of an era that can be traced to 1958 and the completion of the TransCanada Corp. pipeline that connected Western Canada to markets in the Northeast, according to EIA.

“Net U.S. natural gas imports from Canada peaked in 2007, averaging over 10 Bcf/d,” EIA said. Since then, the rise of unconventional production in the U.S. onshore has “displaced Canadian natural gas. Border crossings in Idaho and Montana make up the largest portions of natural gas entering the United States from Canada by pipeline, making up about 25% and 20%, respectively, in 2016.”

While the United States still is a net gas importer from Canada, exports to Eastern Canada have steadily increased since the completion of the Vector Pipeline in 2000. Exports of U.S. gas across the border from Michigan to the Dawn Hub in Ontario make up the largest share of pipeline exports to Canada, according to EIA.