U.S. midstream operators are focusing on incremental additions to their natural gas infrastructure in the Haynesville Shale, Permian and Appalachia basins as quicker and lower-risk solutions to rising production growth. 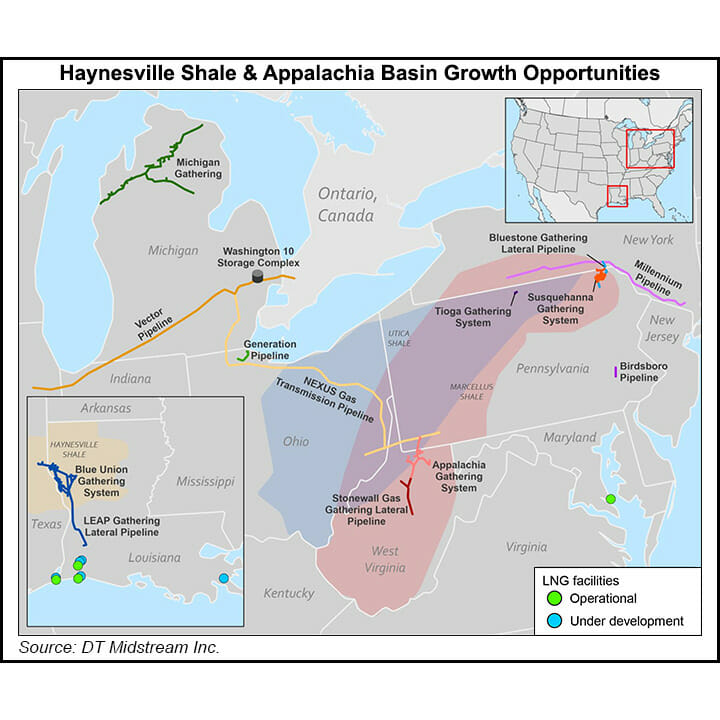 DCP Midstream LP is in “advanced discussions” with its partners on the Gulf Coast Express Pipeline (GCX) to bring “quick and efficient” capacity to the market via an expansion, according to management. CEO Wouter van Kempen last week said an open season was set to be launched “in the coming days” for the 2 Bcf/d Permian conduit.

The pipeline is co-owned and operated by Kinder Morgan Inc., whose management team discussed the potential expansion with investors last month. Altus Midstream Co. also is an owner in the 530-mile pipeline, while Targa Resources Corp. sold its 25% stake earlier this year to an undisclosed buyer.

“The good thing about GCX…you don’t have to go through a lot of right-of-way. There’s not a lot of uncertainty. It’s a fairly quick market solution,” van Kempen said on DCP’s first quarter 2022 earnings call.

Management also is considering taking an additional equity investment in the pipeline. “In general, we like the asset,” the CEO said. “It’s a great strategic fit with our asset base. It’s fee-based; it complements the portfolio.”

Van Kempen said that with a strong long-term outlook for U.S. production, opportunities across DCP’s footprint are increasing, “and we’re positioned to respond.” He noted, however, that DCP recognizes that a key component to taking advantage of these opportunities is ensuring downstream natural gas liquids and natural gas takeaway options for its customers.

“Over the last 10 years, DCP has built a solid track record of developing and driving downstream solutions as residue takeaway has become a focal point for the Permian and a potential bottleneck to growth,” he said.

To that end, DCP is adding large-diameter gathering lines and compression to optimize and enhance its gathering system in the Permian’s Midland sub-basin. Utilization is expected to increase in the second half of the year given increased activity among private producers, according to management.

“Currently, we benefit from having available capacity, and we’re positioned to invest as necessary to fill it,” van Kempen said.

DCP also is prioritizing investments in the Delaware sub-basin. The midstreamer is expanding the pipeline network and adding compression in order to align with its customers’ production schedules. Management reiterated its expectations for production in the region to grow between 5 and 7% year/year in 2022.

“We’re seeing a number of opportunities in these growing areas, but we will continue to take a disciplined approach when deploying capital,” van Kempen said.

DJ Assets Filled To The Max

Headquartered in Denver, DCP also is banking on continued activity in the Denver-Julesburg (DJ) Basin. Its assets in the region are currently operating near capacity, with volumes going forward expected to remain robust. The firm continues to evaluate options to expand its system in order to support life-of-lease acreage dedications, according to management.

“As an example of a very capital-efficient solution to support our customers’ near-term needs, in the last couple of weeks we successfully executed an additional offload in the DJ Basin to secure up to 100 MMcf/d of incremental processing capacity to service our customers’ drilling plans,” van Kempen said. “Moving forward, we will also continue to invest in our gathering infrastructure and be in a position to pursue additional expansion options dependent on our producers’ outlook.”

CFO Sean O’Brien noted that while DCP’s producer customers are seeing some “nice growth at a reasonable rate,” the company is surrounded in the DJ with a number of midstream companies that have open capacity. “This is a really just prime example of where you can use a ‘supply long, capacity short’ strategy where it still works.

“Gathering and processing is really a real estate business,” he added. “You can be in a certain zip code and things are tight, and you can go move 50 miles over and there is open capacity.”

Van Kempen said the call on U.S. production continues to strengthen, driven by a structural change in global supply and demand. Potentially on the cusp of a commodity super cycle, DCP’s “commodity upside is a unique advantage setting us apart from our peers and resulting in very strong earnings potential in this environment,” according to the executive.

“With our strengthened balance sheet providing financial flexibility and the earnings power of the DCP business, we have great optionality to return additional capital and continue creating long-term value for all unitholders,” van Kempen added.

DCP management said if the current forward curve holds, the company could see $200 millon-plus of upside to the midpoint of its full year earnings guidance. The firm’s earnings are 83% fee and hedged for 2022, leaving a “significant upside as our portfolio takes advantage of the strong current fundamentals,” according to O’Brien.

“And while we’re comfortable with our current 2022 hedge book levels, we are capitalizing on the current market and adding hedges in 2023 and 2024 at very attractive pricing levels,” he said.

DT Midstream Inc. management also recently noted the strong fundamental outlook for natural gas, indicating that the current environment is providing tailwinds in its pursuit of additional expansions in the Haynesville.

For example, DT is looking to boost capacity on the 150-mile, 36-inch diameter Louisiana Energy Access Project (LEAP) gathering system by adding compression. The gathering system has a current capacity of 1 Bcf/d, but could reach 2 Bcf/d based on demand and producer commitments, according to management. The 300 MMcf/d phase one expansion already is under way.

“We believe that new projects are needed to facilitate the delivery of Haynesville gas to the LNG export terminals,” CEO David Slater said. “And expansion of existing systems, such as LEAP, is a quicker and a lower-risk solution than a greenfield build.”

“Projections are for 7 to 8 Bcf/d of growth in both Haynesville supply and Louisiana Gulf Coast LNG demand between now and 2030,” according to Slater. “This is translating to very strong demand for pipeline capacity from the Haynesville to the Gulf Coast.”

Opportunities for organic growth extend farther north in Appalachia as well, the company chief said. Among the top priorities for DT’s commercial team are recontracting opportunities on the Nexus Gas Transmission given higher gas prices. DT awarded a new five-year contract on Nexus for 100 MMcf/d of capacity at what the CEO said were “improved rates.”

Slater added that DT is seeing more interest in available capacity in its network given the strong price signals for Appalachian producers to drill. “They don’t want to drill and flood the basis. They want to drill and go to a market.”