Armed with major reductions in spending and a pause on some projects, Enable Midstream Partners LP, Targa Resources Corp. and DCP Midstream LP have joined companies up and down the energy supply chain in positioning themselves to emerge from the oil market decline and economic downturn on strong financial footing. 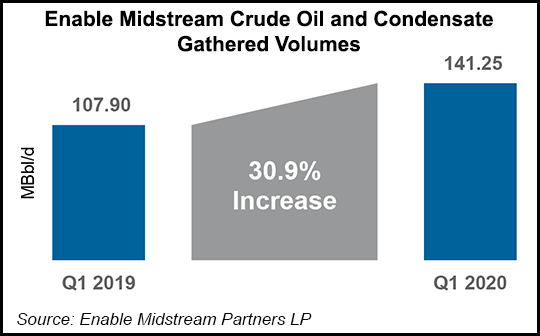 Management for the companies, which together operate more than 74,000 miles of pipelines across the United States, said conversations with exploration and production (E&P) companies, their customers, are fluid. Although some volumes are expected to be curtailed in the coming months, there are positive signs developing.

Enable CEO Rod Sailor said the midstreamer’s outlook assumes a roughly 0.6 trillion Btu/d decline in natural gas and a 70,000 b/d drop in crude and condensate production in May, mostly in the Anadarko and Williston basins. However, the “more constructive outlook” for natural gas prices has bolstered E&P interest in the leaner gas plays, particularly the Haynesville Shale and, to a lesser extent, the Anadarko Basin. The company chief said Enable continues to work with producers “to find creative ways to get gas molecules to the absolute best market available.”

Enable’s outlook assumes curtailments extending through June, with an estimated impact to the bottom line of $12 million, though management noted that its E&P customers are not providing indications of curtailments beyond May. As of April 27, there were 12 rigs working across Enable’s footprint that would be connected to its gathering systems. Six rigs were in the Anadarko, four were in the Ark-La-Tex region that encompasses the Barnett, Fayetteville and Haynesville shales and two were in the Williston Basin.

“We find ourselves in a very fluid environment,” Sailor said during the first quarter earnings call. “Accordingly, while we believe demand will return and prices will stabilize over time, we cannot know or predict when that may occur, nor can we predict the full extent or duration of any customer volume curtailments.”

Last month, the Oklahoma-based midstreamer sliced its distribution in half and made other cuts that are expected to produce around $450 million of additional cash flow annually.

“Even though we are facing near-term challenges, our assets have served customers for many decades through many different industry cycles,” said CFO John Laws. “We are confident that the steps we are taking position Enable well for success both now and in the future.”

Despite low commodity prices, Targa started 2020 off strong, posting a 32% jump in Permian Basin volumes, a 37% increase in fractionation volumes and a 26% rise in export volumes. However, the company saw a “small” amount of shut-ins across each of its gathering and processing (G&P) assets in April and is estimating around 10% of curtailed volumes across the Permian footprint for May.

“So far, our volumes in the Permian in April were approximately flat to the first quarter,” CEO Matthew Meloy said during the earnings call. “So we have not seen a material impact from shut-ins. We do, however, expect more volumes to be shut in for May.”

Targa also is projecting a roughly 10% shut-in of volumes in its central region footprint that is largely concentrated in Oklahoma, while in the Badlands of South Dakota, the firm is estimating about 30-40% of natural gas and about 20% of crude to be shut in. These shut-ins are expected to result in lower natural gas liquids (NGL) supply through its Grand Prix pipeline and through fractionation trains in Mont Belvieu, TX.

Given the uncertainty surrounding the Covid-19 pandemic and oil market weakness, Targa has withdrawn its previously announced operational guidance.

“Our producer conversations are very fluid,” Meloy said. “We’ve seen variability. Producers right now are trying to work through what best makes sense for them. But a reasonable guess would be maybe a few months” to know how much volume is curtailed by customers.

Meanwhile, Targa is moving ahead with an eighth fractionation unit at the Mont Belvieu complex. Meloy said Targa has a “significant” number of third-party customers with long-term fractionation contracts as well as additional volumes moving through the G&P business, which are underpinned by acreage dedications and volumes coming from processing plants.

“These commitments ramp over time, and so that’s what gave us the confidence” to to invest in the seventh and eighth trains, Meloy said. However, the ramp up to full capacity would likely “take a little bit longer than we estimated when we underwrote those facilities.” However, Targa “was so far along on Train 8 that there is not much cost savings to be had by delaying that.”

The same story applied to a planned expansion of a liquefied petroleum gas export facility in Galena Park, east of Houston. Chief Commercial Officer D. Scott Pryor pointed out that every quarter dating back to early 2019 has recorded stronger results as export volumes cross Targa’s docks.

“We continue to see good exports in the month of April. And things are shaping up. There is still strong demand for exports across the world and as markets recover in the East, that actually provides more benefit to us over the long haul.” The decision by the Organization of the Petroleum Exporting Countries and its allies to reduce oil output “adds some benefit to U.S. Gulf Coast volumes going out. So we feel very fortunate to be in this position, with a very diverse downstream market that supports our upstream production growth.”

Targa has hedged about 85-100% of natural gas, 75-100% of condensate and about 65-80% of NGLs through this year. The midstreamer continues to monitor and manage its credit exposure, though management does not expect any “material” credit losses.

Net growth capex, already cut in March amid the coronavirus pandemic, was further reduced to $700-800 million. Targa also reduced the dividend to 10 cents from 91 cents. The company had about $2.4 billion of available liquidity at the end of March, with no maturities of senior notes or credit facilities occurring until 2023.

Like Targa, DCP also saw volumes “hanging in there” through April despite initial expectations of a decline. NGL volumes increased by 13% sequentially, including a roughly 26% jump on the Southern Hills pipeline, driven by full quarter of volumes from the Denver-Julesburg (DJ) Basin extension. It also posted record volumes on the G&P segment in the DJ and “strong” volumes in the Delaware sub-basin of the Permian.

Looking ahead to the second quarter, CFO Sean O’Brien said although volumes in April were generally in line with the strong volumes in 1Q2020, “we know that the remainder of the second quarter and the second half of the year we will rely heavily on our volume outlook. We’re now anticipating that each region will endure volume declines of around 10-15%,” with the biggest declines “likely” in late 2Q2020 and into 3Q2020.

Permian volumes are projected to decline around 5%, while volumes on its more southern assets in Texas and Louisiana are expected to decline about 15%, according to the CFO. The Midcontinent is projected to see the most severe volume declines, now estimated at 20%. DCP expects average NGL throughput to decline by about 10-15% on its Sand Hills and Southern Hills, which are in the Denver-Julesburg (DJ) Basin.

CEO Wouter van Kempen noted the “dynamic environment” in which the industry is working and said although volume decreases are to be expected, DCP is working with customers to keep some volumes flowing. “We’re able to work with them based upon our integrated kind of service offering” and provide them a better netback if they keep things flowing on our systems, and “the net result of that was that some significant volumes stayed on our system and were taken off someone else’s system.”

Like other midstreamers coping in the current price environment, DCP has sharply reduced spending for the year, lobbing off 70% of its sustaining and growth capital. It also has deferred an option to partner with Phillips 66 in building the Sweeny fractionators 2 and 3, and has implemented more than $90 million of cost reductions. The company also halved its distribution.

“These actions not only position us well to manage through this downturn by increasing our liquidity, they also demonstrate the flexibility and speed of the DCP model,” van Kempen said.

Should market conditions continue to deteriorate, DCP can pull several additional cash flow levers, including using the system to optimize producer netbacks and consolidating assets, the CEO said. DCP also maintains $325 million of “dry powder” and ended the quarter with about $600 million of liquidity. The next senior note is due late next year, and management expects to have sufficient free cash flow to retire the debt without the need to access capital markets. DCP withdrew its original 2020 guidance issued in February, but it did not provide an updated outlook.