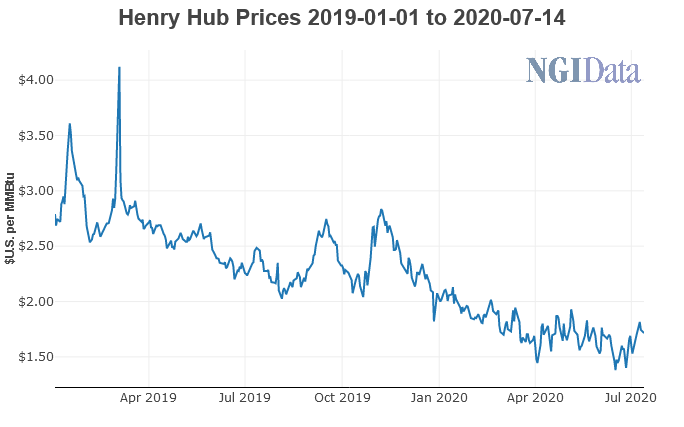 Even as the coronavirus rages on, impacting both natural gas demand and production, pipeline natural gas exports from the United States to Mexico continue to show strength.

On July 8, U.S. piped exports to Mexico hit the 6.2 Bcf/d mark, the highest level ever reached in cross-border flows in a single gas day, according to analysts at Genscape Inc. U.S.-to-Mexico exports are averaging 5.1 Bcf/d so far this summer, only down about 200 MMcf/d from last year’s hot season.

“The implicit year-on-year flatness is primarily associated with the gas demand destruction that the coronavirus crisis induced during April and most of May this year,” the analysts said. “Upward revisions to our border flow projections are likely in so far as Mexican gas demand continues to recover, following the government’s easing of lockdown measures on industrial and business activities as of early June.”

Mexican power burns are nearing an average of 3.7 Bcf/d this summer, down from last summer’s record of 4.2 Bcf/d, but stronger since March and the start of the pandemic.

Mexico sources about 60% of its power from natural gas.

Another factor boding well for natural gas pipeline exports to Mexico is the startup of the Villa de Reyes-Aguascalientes-Guadalajara (VAG) pipeline. The U.S. Energy Information Agency (EIA) said last week that it expects Mexico natural gas exports to rise quickly with the start of the VAG leg of the system. The 890 MMcf/d pipeline is the final stretch of the Wahalajara system that runs from the Permian Basin in West Texas to Mexico’s industrial heart of Guadalajara.

“EIA expects utilization of the Wahalajara system to quickly ramp up, resulting in increased U.S. natural gas exports to Mexico out of western Texas and additional takeaway capacity out of the Permian Basin,” EIA analysts said.

VAG was mechanically complete at the end of March and the EIA said it began flowing gas in June, although flows have yet to register on the pipeline’s electronic bulletin board.

“We believe that flows through Wahalajara have been part of the general increase in Mexico’s pipeline imports from the U.S.,” Genscape analyst Ricardo Falcon told NGI’s Mexico GPI.

“At some point in June, the system’s upper leg, Tarahumara, was among the top pipes supporting the overall increase in cross-border flows. Hard to say what (if any) is the exact contribution from VAG, given that the asset is still not reporting flow data. But we do not rule it out as a contributing factor, considering the evolving trends in the different points that we monitor across Mexico’s natural gas network.”

The system is seen as a key outlet for Permian producers, which have suffered from a lack of takeaway capacity.

U.S. benchmark Henry Hub prices tracked nearly $1 below year-ago levels in the first half of 2020, averaging only $1.81/MMBtu, according to the EIA. This included a record low of $1.61 in June and sub-$2 gas every month from February through June.