The Industrial Energy Consumers of America (IECA) on Tuesday urged Congress to not impose any direct or indirect climate-related costs on U.S. manufacturers until an import fee is implemented on carbon-intensive goods. 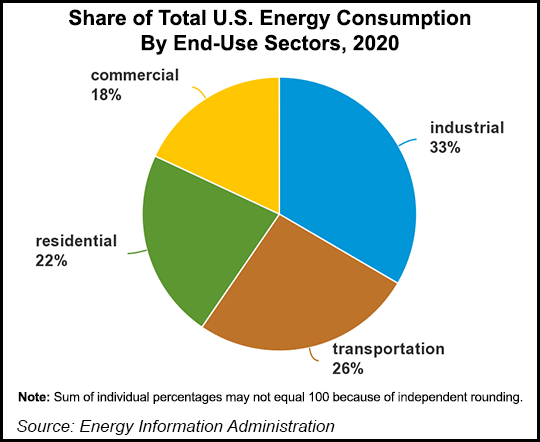 A carbon border adjustment mechanism, or CBAM, recently was proposed by the European Union (EU). A CBAM puts an estimated greenhouse gas (GHG) price on imported goods to equalize costs. It also is designed to prevent industries from moving “offshore,” i.e. to other places where it may be less expensive to emit carbon dioxide (CO2) emissions.

“Imposing costs without an enforceable CBAM will result in GHG leakage and shift manufacturing production, jobs and GHG emissions offshore, which achieves nothing environmentally,” said CEO Paul N. Cicio in the letter.

“This is too important to not advance a CBAM through regular order. The manufacturing sector employs over 12 million people and will be potentially negatively impacted if we do not get this right.”

The trade group represents manufacturing companies with an estimated $1.1 trillion in annual sales, with more than 4,200 facilities nationwide and 1.8 million-plus employees worldwide.

Creating and operating a CBAM for emissions “will take several years,” the IECA said in the letter to Senate and House leadership. In mid-August, the Senate passed a fiscal year 2022 budget resolution that could pave the way to enact a CBAM.

Since 1990, IECA noted that domestic manufacturing has reduced CO2 emissions by 23% more than any sector, while manufacturing gross output has increased by 112%.

“Even more outstanding is that U.S. manufacturing direct and indirect energy consumption has been flat for 50 years,” IECA noted.

To address climate change worldwide, “it is essential to ensure a level playing field for U.S. manufacturing,” particularly  energy-intensive, trade-exposed industries, aka EITEs.

EITEs, which compete globally, include steel, aluminum and cement producers.

Establishing a CBAM, which is likely to take years, said the IECA, “is the best way” to level the playing field.

“A CBAM would impose a carbon fee on the carbon intensity of the imported products equal to the total climate costs imposed on equivalent U.S. manufacturing products, and rebate climate costs on U.S. exports.” President Biden has expressed support for a CBAM to align the United States with the EU, but it is not considered a priority for the administration’s climate agenda. While the oil and gas industry has long advocated a carbon tax policy, it has never made much headway in Congress. The EU plans to pilot a CBAM on carbon-intensive imports, including steel, cement, fertilizer and aluminum. The pilot would extend through 2025 before full implementation, possibly in 2026.