U.S. LNG producers have had the busiest year signing up new customers since before exports began from the Lower 48 in 2016, but additional pipeline capacity and natural gas production will be needed to send more of the super-chilled fuel overseas. 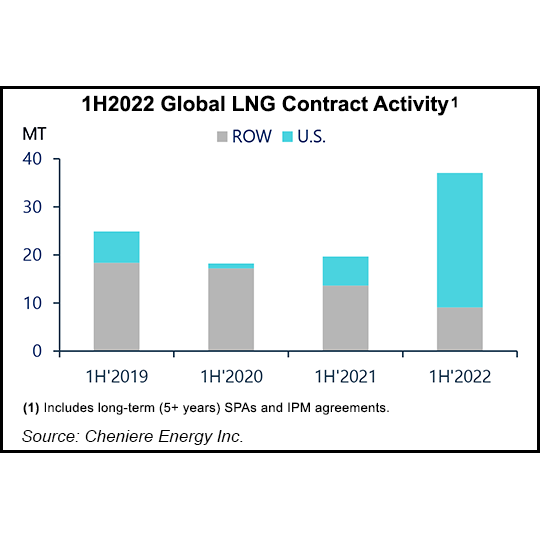 While the United States easily has the world’s largest backlog of near-shovel-ready liquefied natural gas projects, takeaway constraints remain a hurdle to getting more of the facilities built.

This year alone, five developers have signed over 20 long-term deals to supply more than 30 million metric tons/year of LNG, or roughly 4 Bcf/d, to gas-thirsty buyers in Asia and Europe. Cheniere Energy Inc., the largest U.S. LNG exporter, said earlier this month it’s had the most active year for contracting since 2011.

“Overall, more LNG exports in the United States increases demand for North American natural gas, and that is going to tighten the U.S. market,” said RBN Energy LLC analyst Lindsay Schneider. “We can produce sufficient supplies to meet that demand as long as there is pipeline capacity to get the gas to export locations.”

Hitting a Wall in Appalachia

The Appalachian Basin is the nation’s largest gas-producing region, churning out more than 35 Bcf/d. Over the last decade, however, environmental groups have successfully stopped or slowed down pipeline projects and limited further growth in the Northeast.

That isn’t likely to change meaningfully in the coming years, which could leave the Permian Basin and Haynesville Shale to shoulder much of the growth forecast for LNG exports.

EQT Corp. CEO Toby Rice acknowledged during the company’s second quarter earnings call late last month that Appalachian pipeline capacity has “hit a wall.” EQT, an Appalachian pure-play and the nation’s largest gas producer, is keeping production flat as a result. Limited takeaway to the Gulf Coast also has the company searching for growth opportunities in export projects on the East Coast.

The 2 Bcf/d Mountain Valley Pipeline (MVP), which has repeatedly been delayed in the face of environmental opposition, could be the last greenfield natural gas pipeline built out of the Appalachian Basin, said senior analyst Zack Van Everen of East Daley Capital Inc.

“We assume that’ll be the last one unless there’s a major shift in politics that might allow more people to build pipes with confidence,” Van Everen told NGI.

East Daley expects U.S. LNG exports to grow to 26.3 Bcf/d by 2030 from their current level of nearly 13 Bcf/d. The Calcasieu Pass LNG terminal is currently ramping up, while Golden Pass LNG – the first of the next wave – is set to come online in 2025.

Van Everen said more rigs should start coming back in the Haynesville around that time to meet growing LNG demand, when pipeline constraints are expected to be an even bigger factor than they are today.

East Daley estimates that another 2-4 Bcf/d of takeaway capacity would need to come online between 2026 and 2030 in the Haynesville without significant growth from other gas plays to help feed LNG terminals.

“This assumes significant gas growth from the Permian and other associated gas plays,” he added. “Any view where oil prices take enough of a dip to slow that activity in the Permian and you’re going to have even more of a call for gas from gassier basins.”

‘So Many Projects, So Much Progress’

LNG terminals need a certificate from the Federal Energy Regulatory Commission to advance. FERC requires a project to show that it has enough pipeline capacity for feed gas. Projects must also demonstrate to lenders that they can secure adequate gas supplies during the financing stage.

Hutchison told NGI that “with so many projects, making so much progress” at a time when the world is scrambling for additional gas supplies, pipeline capacity remains a top priority for the LNG industry. He added that concerns also remain about whether the capital markets can provide the equity needed to help finance so many projects.

In its latest short-term energy outlook, the Energy Information Administration forecasted that U.S. dry gas production would average 96.59 Bcf/d this year, up from a record-high 93.55 Bcf/d in 2021. The modest projected growth would come despite a pullback in activity among exploration and production companies that have spent less capital in recent years to appease shareholders looking for better returns.

“Because the international market for LNG is so tight, and demand strong, prices have been elevated and upstream producers are increasingly becoming more interested in participating in LNG projects,” Schneider told NGI.

That interest comes at a time when European and Asian natural gas prices have set records and export demand has helped push U.S. gas prices higher. If prices overseas eventually fall and drag down domestic prices, that could still curb dry gas production growth and limit available feed gas for LNG projects looking to come online over the next decade.

Hutchison stressed, however, that “there are lots of reasons to be encouraged by where things sit at the moment.”

As part of the landmark climate legislation signed into law Tuesday, Sen. Joe Manchin won a promise from Democratic leaders to support a separate measure that would expedite energy permitting approvals and make it more difficult to stop pipeline projects, including MVP.