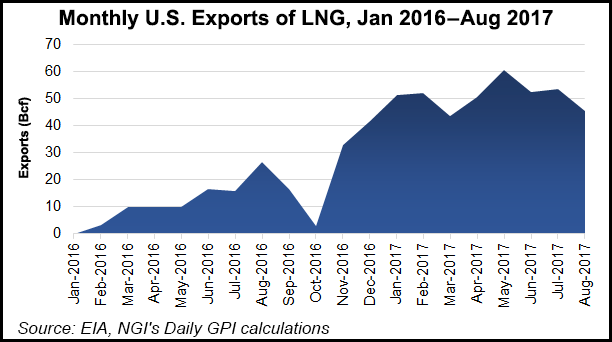 Look no further than the massive build-up in the liquefied natural gas (LNG) trade, where the United States is seen as a key player over the next five years. The U.S. Energy Information Administration (EIA) has cited the same shift, given growing gas demand from Mexico, declining pipeline imports from Canada and a mammoth jolt in worldwide LNG exports.

Roughly 80% of respondents to BV’s survey see the United States emergence as a major LNG supplier “is either ”extremely’ or ”somewhat likely’ to shape the global LNG market over the next half decade,” BV researchers said.

“More than 75% cited the emergence of new LNG markets in developing countries as ”extremely’ or ”somewhat likely’ to shape the world LNG market during that stretch.”

This year’s online survey was conducted from Aug. 8-29 and reflects the input of more than 300 utility, municipal, commercial and community stakeholders, with 338 completing a majority of the survey. Because the survey was administered online, the amount of self-selection bias was unknown; therefore, no estimates of sampling error were calculated.

Fueling optimism about U.S. emergence in the LNG space comes in part from low production costs and “a profound shift in contracting practices — the latter amounting to a price restructuring that now challenges LNG’s long-standing overseas suppliers.”

For example, gas-hungry India in 2009 signed a 20-year LNG deal with ExxonMobil Corp., but the country has since renegotiated the terms after its rate for LNG exceeded spot market pricing. India also in recent years has reworked its gas supply contract with Qatar, still the world’s dominant LNG exporter.

“Global LNG activity is impacted by a number of factors including foreign relations, emerging production leaders and available infrastructure,” said BV’s Hoe Wai Cheong, president of the oil and gas business. “Some of these issues may be perceived as challenges, but many industry leaders are now keeping a close watch on international events to proactively map out future business opportunities.”

Higher expectations of U.S. relevance in the LNG sector is coming as global supplies surge, and Australia makes moves to overtake Qatar as the No. 1 supplier.

Qatar in July lifted a decade-long moratorium on its North Field development to potentially increase LNG output to 100 million metric tons/year (mmty) from the current 77 mmty.

“But Black & Veatch report respondents believe that glut will dwindle, making the case for new, bigger exporters such as the United States,” researchers said.

“When asked when the current LNG oversupply will abate and foster a need for a restocking in that sector, more than 60% of the respondents estimated that would come by 2025.”

Over the next five years, a big appetite for LNG is growing south of the United States, already reflected in export volumes.

Mexico will increasingly becoming the destination for U.S. LNG exports, according to 36% of the respondents. That expectation is mirrored by EIA, which said Mexico’s gas use for power generation should increase by nearly 50% between 2016 and 2020.

Gas exports to Mexico from the United States also reached near-record levels over the first five months of 2017, the EIA said.

BV’s survey also showed increased Latin American demand for LNG is expected in the next five years from Brazil, Central America, Argentina, Colombia and the Caribbean.

“Production efficiencies made in recent years have stoked a steady increase in global supply,” said BV’s John Chevrette, president of management consulting. “However, the ability of emerging markets to absorb this supply, given the lack of terminals, pipelines and other infrastructure, will require collaboration with end users and gas-to-power integration experts.”

The industry sees building pipelines (32%) and investing in LNG (27%) as the most critical investments for growth, according to BV’s survey.

More than one-quarter of respondents (27%) are planning to balance new renewable energy with gas resources.

BV also surveyed industry players about price trends and found that expectations for global crude prices between now and 2020 is sharply lower than it was a year ago.

“Nearly half of the industry respondents now expect prices to only be between $40 and $50/bbl,” BV said. “In the 2016 report, merely 7% listed this price range as their expectation. Oil and gas prices have historically been indexed in many markets, signaling a shift in survey respondents’ outlook for the industry.”

Among the other survey findings, BV found that 32% are using data to manage risk, with other management functions like budgeting, strategic planning and daily operations less reliant on data (30%).

According to 44% of the gas storage operators surveyed, impending final rules from the U.S. Pipeline and Hazardous Materials Safety Administration could make business more difficult and increase costs for customers.