Falling U.S. liquefied natural gas (LNG) output is expected to throw yet another wrench into the global market in the months ahead and drive increased price volatility, according to IHS Markit. 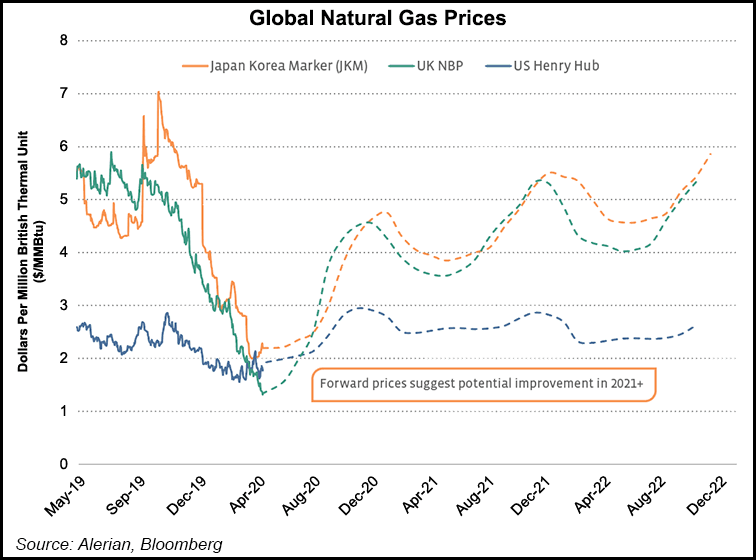 “The inevitable has happened,” said executive director Terrell Benke. “U.S. LNG capacity utilization has begun a turndown in response to market forces exacerbated by Covid-19. We are witnessing an historic event where U.S. LNG is taking on the new role of swing supplier.”

The world is awash in LNG as demand has fallen from the pandemic. European benchmark prices have slipped below Henry Hub, which is also trading near parity with Asian gas, making it largely uneconomic to move to key overseas markets. Oil-indexed LNG has also become more competitive given the slide in crude prices. Shipbroker Poten and Partners said earlier this month that roughly 130 U.S. LNG cargoes could be canceled between May and October.

In a recent analysis, IHS researchers said capacity utilization at Lower 48 export terminals had fallen to 65%, with further declines expected. Utilization rates could fall below 50% given summer price differentials, which put “U.S. LNG firmly out of the money on a short-run marginal cost basis.” Until recently, domestic LNG facilities had been operating at 100%.

Feed gas deliveries had fallen below 5 Bcf/d this month from highs of about 9 Bcf/d earlier this year, according to NGI’s U.S. LNG Export Tracker. While flows bounced back above 6 Bcf/d this week, IHS researchers said volumes are likely to oscillate as the market balances.

Forward gas prices in Asia, Europe and the U.S. show some seasonal improvement later in the year and next, but it could cost more to move gas overseas through at least September, researchers said. NGI’s calculations showed a negative spread between the United States, Asia and Europe through October and possibly longer for cargoes without vessels chartered.

“The process by which this turndown in U.S. LNG output will balance the global market will not be smooth, and the scale of LNG cargo cancellations from the U.S. and other suppliers globally is expected to provoke price volatility as the market attempts to balance supply and demand,” IHS researchers said.

Gas benchmarks lately have been in free fall. The Dutch Title Transfer Facility in northwestern Europe and the UK’s National Balancing Point are nearing $1.00/MMBtu. Demand has been hit hard in Europe, where the coronavirus and a warm winter combined to leave storage stocks brimming. Gas in underground storage was at above 71% of capacity on Thursday (May 28), while storage at regasification terminals was at nearly 60%.

European sendout levels to date this month have dropped 4% from April, as the number of U.S. deliveries has declined, according to Schneider Electric.

Europe has been a leading destination for domestic gas exports because of its proximity, ample storage capacity and the strong wholesale market’s ability to take in the fuel, particularly on a spot basis. Of the 209 cargoes exported from U.S. shores this year, 114 were to Europe, according to NGI calculations. Deliveries from other dominant suppliers such as Qatar have remained steady, Schneider added.

Europe’s gas surplus is again impacting the Asian market. Spot prices at the Japan Korea Marker have fallen nearly 50 cents over the last two weeks and were below $2.00 after a rally earlier in the month as pandemic-related lockdowns eased.

As European benchmarks have fallen, however, more cargoes have found their way to Asia, where prices are coming under pressure. Shipbroker Fearnleys AS also noted this week that if European storage levels remain elevated and keep a lid on prices, reloads at import terminals could reemerge as traders search for higher prices. Reloads occur when LNG that was previously discharged at an import terminal is loaded onto a vessel again.