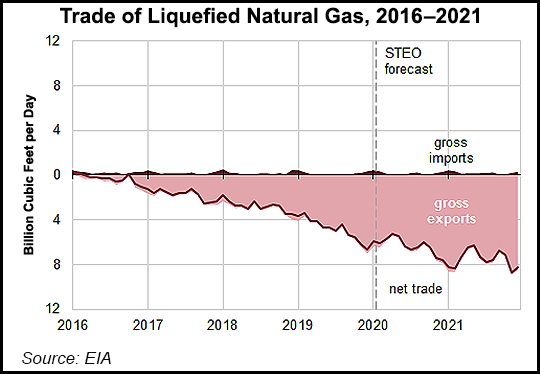 Freeport LNG on Friday announced the start of commercial operations for its second train, with the start of gas deliveries from BP plc under the portfolio player’s 20-year agreement with the facility on the Texas coast. Train 1 started operations last month and Train 3 is on track for a commercial start in May.

Along with other trains at Freeport, Cameron LNG in Louisiana and Corpus Christi LNG in Texas, U.S. baseload liquefaction capacity is expected to reach 10.2 Bcf/d next year. As the facilities ramp up, exports are expected to keep growing from an average of 6.5 Bcf/d this year to 7.7 Bcf/d in 2021, according to the Energy Information Administration (EIA).

EIA also said domestic LNG exports declined slightly during the week ended Jan. 15 to 51 Bcf. Fourteen vessels, including seven from Sabine Pass, two each from Cameron, Corpus Christi and Dominion Cove Point, and one from Cameron left the country. That’s compared to 19 vessels carrying 68 Bcf in the prior week.

Elsewhere, the Jordan Cove LNG facility, which would be built in Oregon with a capacity of more than 7 million metric tons/year, advanced on Jan. 16 when the Coos Bay City Council approved the project’s final local land use application. The project has received approval on all county and city applications and is awaiting Federal Energy Regulatory Commission approval and authorization of state permits.

“Eagle LNG is experiencing a growing demand for LNG to serve small-scale export markets, while domestic demand for fuel-grade LNG continues to increase,” CEO Dick Brown said in announcing Matrix as the EPC.

U.S. export projects are barreling ahead as a supply glut continues to weigh on prices at home and abroad. February New York Mercantile Exchange futures fell below the $2.00/MMBtu mark last Friday for the first time since 2016 and saw the same on Monday as abnormally warm weather has eroded demand.

LNG inventory levels in Europe have scarcely budged as well, standing at 55% of capacity on Monday, according to Aggregated LNG Storage Inventory. That compares to the five-year average of about 52% for this time of year. Some European benchmarks have hit their lowest levels in years as a result, while spot prices have also suffered as inventories are high in other parts of the world such as North Asia.

The global supply glut has reportedly prompted China Petroleum and Chemical Corp., aka Sinopec, to reexamine a supply deal with leading U.S. exporter Cheniere Energy Inc. Sinopec, which has planned to increase its purchases of LNG, plans to review the delivery terms and price, according to Reuters.

Moreover, an agreement signed by President Trump last week to ease trade tensions with China provided little assurance that growing U.S. LNG exports will have a stronger role to play in one of the world’s largest import markets.

While the deal was seen as an important step to restoring trade relations and paving the way for more energy exports given China’s pledge to buy $200 billion of American goods over the next two years, the first phase agreement removed no tariffs imposed by the countries.