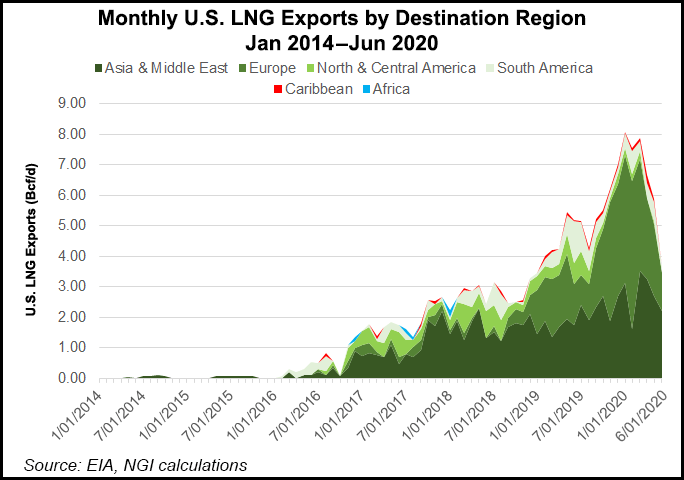 Trump has been a “great cheerleader for U.S. LNG” by raising the industry’s profile and addressing some regulatory bottlenecks during his first term, said LNG Allies CEO Fred Hutchison.

However, Trump “has not been helpful” by imposing a 25% tariff on steel from most countries and by pursuing an aggressive trade war against China that led it to impose tariffs on U.S. LNG, Hutchison said.

One U.S. LNG project “went from a four-year to five-year timeline just because of that,” he said, although he declined to name which one. “That has a direct impact on costs of projects and affects our competitiveness in global markets compared with low-cost producers Qatar and Russia.”

Hutchison said he understands why Trump “wanted to take on China,” but the domestic LNG industry became “collateral damage” in the process.

China resumed importing domestic gas cargoes in March under a so-called phase one interim trade deal signed in January. Under the phase one trade deal, China committed to buying $200 billion of American goods over the next two years, including $52.4 billion of energy products including LNG, oil, refined products and coal. However, to date this year it has imported only 20 cargoes from the United States, according to NGI data.

Hutchison said the phase one deal was a major step in resuming gas exports to China, but the global Covid-19 pandemic slowed their momentum.

China is one of the largest gas importers in the world, but so far only one company has signed long-term deals for U.S. LNG. In February 2018, state-owned China National Petroleum Corp. signed agreements for a combined 1.2 million metric tons/year with Cheniere Energy Inc.

Projects vying to be part of the expected second wave of U.S. exports in the mid-2020s need to sign long-term deals to get financing, and China is one of the main untapped markets.

“The real challenge for our members is there are projects ready to go, or expansion projects ready and fully permitted” that cannot be sanctioned without signing enough long-term deals, Riedl said.

Biden has not said how he would handle the China trade dispute, but he “has said he is opposed to the idea of using tariffs and we share that sentiment strongly,” Riedl said.

Much of the current U.S. LNG export capacity was approved during the Obama administration, when Biden was the vice president. Biden is pro-labor and labor unions support U.S. LNG projects, Hutchison said . If he were elected, he is not expected to stand in the way of LNG development, Hutchison said. In addition, most proposed projects have already have regulatory approval and only need to sign long-term deals to be funded. Even if the Biden administration were opposed to LNG expansion, there is not much room for dispute, he added.

Hutchison is more concerned about a Biden victory combined with a potential Democratic majority in the Senate. That would potentially allow for the Senate filibuster rule to be removed and allow democrats to require the Department of Energy (DOE) and FERC to analyze climate change impacts in the permitting process for pipelines and LNG projects, he said.

The Federal Energy Regulatory Commission in February 2019 resolved an impasse over the extent to which climate change should be analyzed in reviewing projects by quantifying the potential emissions from projects without taking additional measures.

Riedl and Hutchison said Trump has done much to remove some regulatory hurdles facing U.S. LNG developers. The Trump administration accelerated the approval process for small-scale LNG projects. It also fostered cooperation between FERC and the Pipeline and Hazardous Materials Safety Administration to streamline approvals, and it extended LNG export licenses to 2050, among other measures.

The Trump administration “addressed major issues the industry was concerned about during his four years, I think you have to sort of balance that against a trade dispute with potentially the largest trading partner,” Riedl said.

Trump has threatened to sanction companies that participate in the completion of Russia’s 5.3 Bcf/d Nord Stream 2 (NS2) pipeline to Greifswald, Germany. The administration has proposed U.S. LNG as an alternative source of supply.

European LNG importers do not have serious concerns about a Biden presidency, especially with Biden saying he does not plan to ban hydraulic fracturing, said Rice University’s Anna Mikulska, a nonresident fellow at the Center for Energy Studies at the Baker Institute for Public Policy who is an expert on the European energy market. She said the effort to stop completion of NS2 has largely been bipartisan.

With the European Commission last week issuing a blueprint to reduce methane emissions and the potential to impose a carbon border tax to disadvantage U.S. LNG, a Biden presidency could help the domestic industry if Biden were to take stronger measures to control methane emissions, she said.

The Trump administration has sought to rescind Obama-era controls on U.S. methane emissions from the oil and gas industry. It is too soon to tell what impact a Trump victory might have on U.S. LNG exports if he continues his efforts to rescind such measures, Mikulska said. However, domestic LNG has never been considered to be a major supply source in Europe, she said, but more as “being a key in spot transactions.”