LNG imports to the United States reached their lowest levels in 15 years during the first half of 2022, according to the Energy Information Administration, a possible sign that domestic production and infrastructure projects could be improving supply issues in the Northeast. 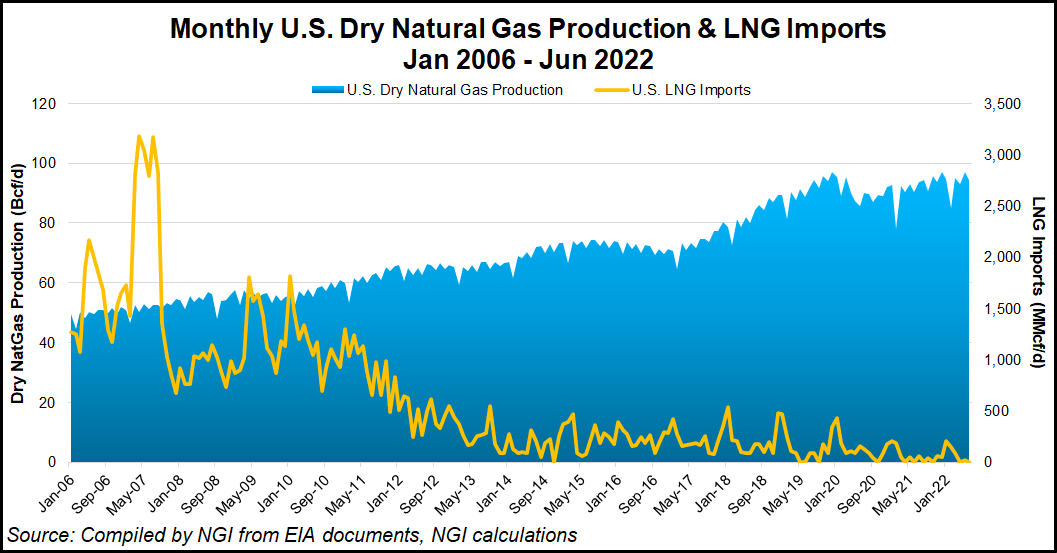 Recent EIA data showed U.S. imports of liquefied natural gas averaging 77 MMcf/d from January to June. It was a decrease from the five-year average during the same period of 174 MMcf/d.

The contrast for the winter months between October and March, when U.S. imports are historically at their highest, is even more stark. Imports averaged 93 MMcf/d during winter 2021-2022, compared to 1.8 Bcf/d in the winter 2006-2007.

Analysts with the EIA wrote that the gradual decline in LNG imports aligns with increases in domestic production and infrastructure projects aimed at distributing that extra supply. Some of those projects, including the Algonquin Incremental Market (AIM) project, have helped improve the supply outlook for New England, which traditionally has imported more LNG than other U.S. regions.

However, infrastructure bottlenecks and brutal winters can still leave the region heavily dependent on foreign gas, with imports contributing “up to 35% of New England’s natural gas supply” on peak days, EIA analysts said.

While the outlook for New England may be improving relatively, utilities and business advocates are still calling for more infrastructure in the region, including for LNG imports. In a recent letter to federal regulators, regional transmission organization ISO New England Inc. advocated for a turn away from reliance on LNG imports, but warned that delays in Appalachian Basin pipeline investment meant the region would need more incremental LNG infrastructure improvements to meet increasing demand.