Cheniere Energy Inc. remains ahead of the race in sending U.S. natural gas into the global marketplace, but other developers continue to face delays that put into question the timing of a more than 7 Bcf/d projected bump in feed gas deliveries. 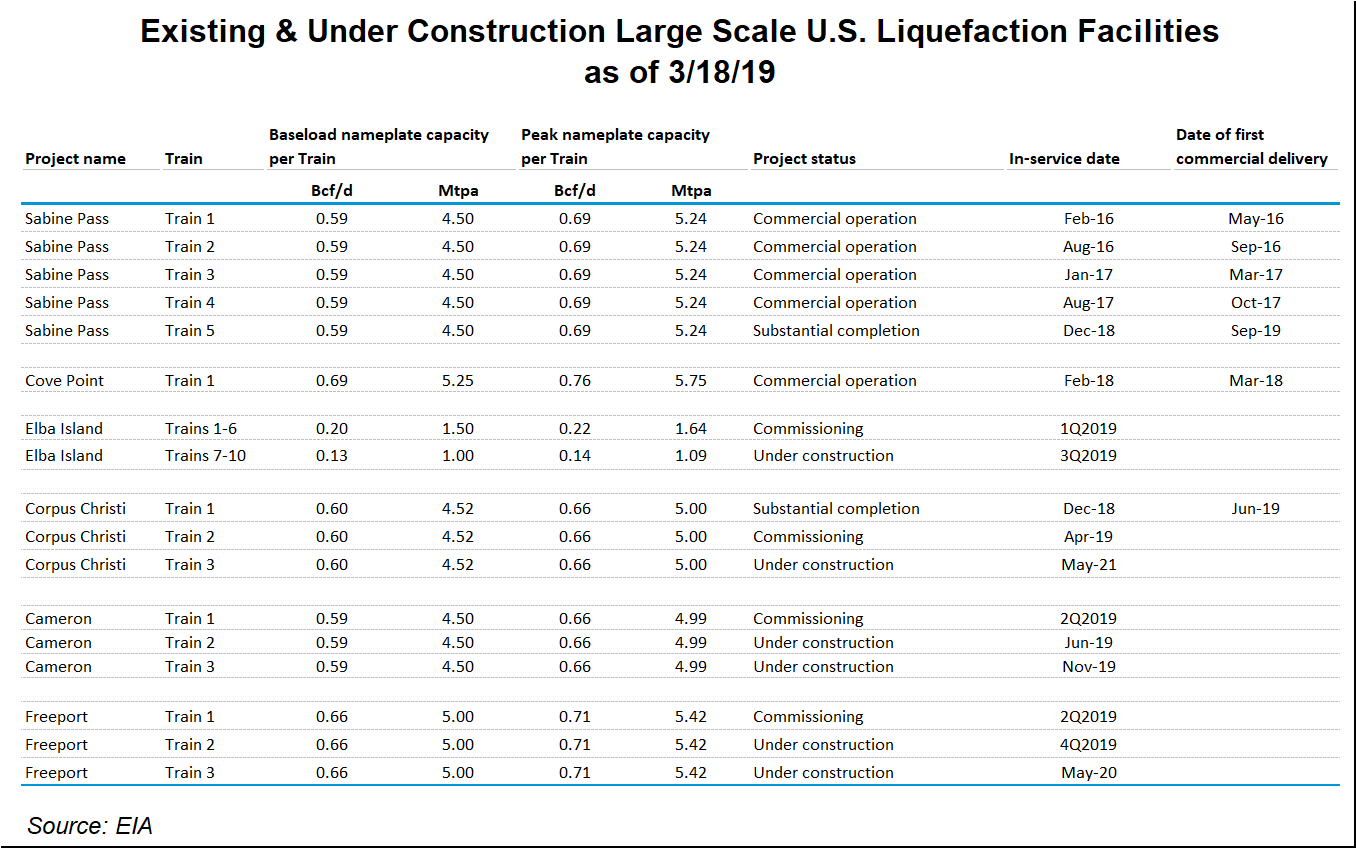 Cheniere’s Sabine Pass liquefied natural gas (LNG) facility is expected to operate slightly above its nameplate capacity this summer, the first in which all five trains are operating at the Louisiana facility, according to Genscape Inc. Train 5, substantially completed earlier this month, received FERC approval last Tuesday (March 12) to start service. The Houston-based developer has indicated, however, that Sabine Pass would undergo higher-than-average maintenance this summer.

While Cheniere has not disclosed details on the increased maintenance plans at the Gulf Coast facility, two outages have already been announced on the Creole Trail Pipeline, one of four pipelines directly connecting to the project. Creole’s Gillis compressor station is expected to see gas flows fall as low as 1 Bcf/d during the first week of April and again in early August. The line regularly supplies more than 1.5 Bcf to Sabine, said Genscape’s Amir Revjani, proprietary data analyst.

“It’s unclear if this maintenance event will affect Sabine Pass, or if other pipelines will compensate for the reduced flows,” Revjani said during a webinar last Thursday.

It should be noted that this will be the first summer in which the Kinder Morgan Inc. (KMI) Louisiana Pipeline is in operation. The 135-mile 2.2 Bcf/d system consists of two pipelines that originate at Sabine Pass in Cameron Parish, LA. One pipeline terminates at Columbia Gulf in Evangeline Parish, LA. The second interconnects with Natural Gas Pipeline Company of America (NGPL) and continues on NGPL through leased capacity to two delivery interconnects near Johnson Bayou in Cameron Parish, LA.

In addition to planned maintenance events that typically occur in the midstream sector during the summer, unforeseen outages also may reduce operational capacity. Last summer, there were 15 unplanned events, and more are expected this summer, according to Genscape.

Heavy fog along the Gulf Coast prevented ships from entering or leaving Sabine Pass for three days in February. Genscape alerted LNG clients about the outage at Sabine Train 1 when its proprietary monitors spotted a stop to activity. Later that week, deliveries headed to Sabine Pass swiftly declined to 770 MMcf/d, down nearly 2.5 Bcf/d from a previous average of 3.2 Bcf during the week prior to the outage.

Despite the multi-day outage and high storage inventories, ship loadings at Sabine Pass were on par with year-ago levels for February, while loadings surged nearly 30% year/year in January, Revjani said. Ship loadings for the entire winter were at record levels, coming in at an average of 1.4 ship loadings/week.

That level of activity is expected to continue growing, according to analysts. Last month, consulting firm Wood Mackenzie Ltd. said demand is robust for vessels to transport gas to worldwide markets, but there is a risk that capacity may soon outstrip supply, especially as 2019 is expected to be a record year for projects reaching final investment decisions (FID).

Genscape estimated U.S. LNG feedgas deliveries would reach 7.2 Bcf/d by the end of summer, a conservative assumption based on allowing for ramp-up of new trains as well as planned and unplanned outages.

By comparison, last summer, only Dominion Cove Point and Cheniere’s trains 1-4 were in service, and “we saw feedgas deliveries average 3.2 Bcf/d,” Genscape LNG team lead Allison Hurkey said. “So we’re looking at a 4 Bcf/d increase year/year, from summer 2018 to end of summer 2019.”

Feedgas deliveries as of mid-March had averaged near 5 Bcf/d, which included deliveries to Cove Point, Sabine Trains 1-5 and Cheniere’s recently approved Corpus Christi Train 1, according to Genscape. The projected bump in U.S. LNG exports this summer will likely be led by Train 2 at the Corpus Christi export project in South Texas.

Genscape expects Cheniere to bring to achieve substantial completion at the second train in Corpus in the second half of this year after it was approved last Monday (March 11) by the Federal Energy Regulatory Commission to introduce feed gas.

KMI’s Elba Island LNG export project in Georgia is likely to achieve first substantial production in May, even though management stuck to its 1Q2019 timeline in the recent quarterly earnings call. On Friday, FERC approved KMI to introduce feed gas, back-up fuel and boil-off gas, but not yet hazardous fluids to other facilities at the terminal.

As for Sempra Energy’s first train at Cameron LNG, delays have continued to push back the expected start date for operations the Louisiana facility. First substantial production is expected in mid-July, but risks to the delayed timeline persist, according to Genscape.

While Sempra indicated last month that it plans to bring online the first train in 2Q2019, with the second train by the end of the year and the final train in May 2020, analysts expect more pushbacks ahead, especially since Cameron has yet to request fuel or feed gas.

“If first gas exports from Train 1 take place in May, the earliest we expect to see first exports would be November for Train 2 and May 2020 for Train 3,” said Energy Aspects analysts. The view is based on Sempra’s reallocation of resources from Trains 2 and 3 to Train 1.

Genscape expects Freeport LNG Development LP’s Train 1 to achieve first substantial production in mid-July, but there are risks too given that facility has yet to request fuel or feed gas.

Separately, FERC on Friday issued a positive final environmental assessment for the proposed 4 million metric ton/year (mmty) Texas LNG export project near Brownsville on the Texas border with Mexico. The initial phase is to have 2 mmty of capacity, with the potential to double it in a proposed second phase. The terminal would be fed via a proposed intrastate pipeline accessing supply from the Agua Dulce hub near Corpus Christi, which is about 150 miles north of Brownsville.

Texas LNG plans to reach FID in late 2019, and if positive, first exports could begin by 2024. The second phase of exports would begin one or two years later.

As for cargoes setting sail this summer, analysts are noting the increased shipping to Europe since the fall, which is helping to displace normal European storage draws amid a mild winter and soft Chinese demand. Gas storage that is not related to LNG recently stood 0.3 Tcf above the five-year average and is poised to exit the winter near five-year highs.

“If 2019 follows a similar trajectory to 2016, then Europe will see 460 Bcf less storage injections over the 250 days of summer compared to 2018,” said Genscape’s Ben Chu, director of equities, LNG and proprietary.

European Union imports of U.S. LNG were 1.3 Bcm (45.9 Bcf) in January, up from 102 million cubic meters (3.6 Bcf) in January 2018, according to the European Commission. In February, total U.S. LNG imports amounted to 0.6 Bcm (21.1 Bcf.) The United States is Europe’s third-largest supplier of LNG to date this year, with only Qatar and Nigeria supplying more.

NGI in January launched its U.S. LNG Export Tracker, and accompanying Natural Gas Volumes historical chart, to provide its readers a more comprehensive view of the burgeoning LNG market. The new LNG Tracker will enable readers to get a headstart on when various LNG trains enter their commissioning and commercial operation stages, as well as show any significant changes in feed gas deliveries from factors like planned maintenance or unplanned outages.