During February U.S. exports of liquefied natural gas (LNG) edged up by 800 MMcf from January to reach a new high of 52 Bcf, according government data. Meanwhile, some researchers see headwinds to growing gas imports by No. 3 U.S. LNG importer China and No. 5 India. 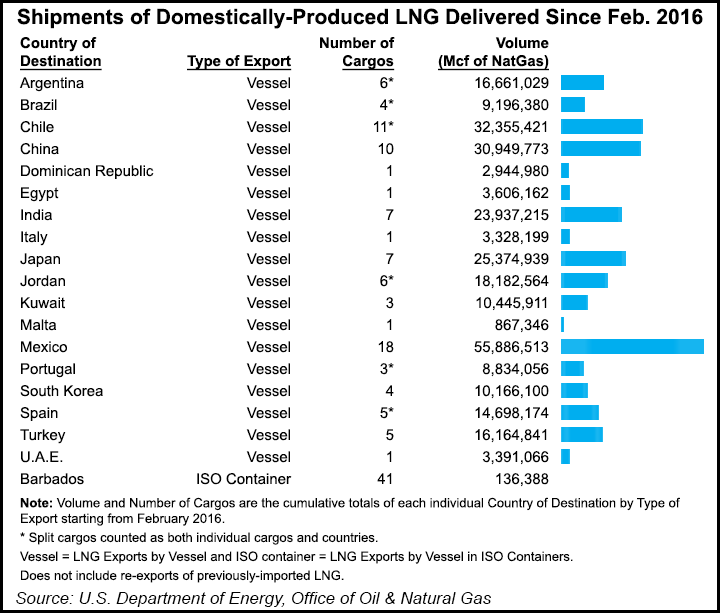 The U.S. Department of Energy’s (DOE) April* LNG Monthly, with data through February, shows that the top five countries importing U.S. LNG based on volume since exports began from the Lower 48 in February 2016 are Mexico, Chile, China, Japan and India.

A trade agreement announced last week between the United States and China could have implications for increasing the volume of LNG exported to China. One of the agreement’s provisions says, “Companies from China may proceed at any time to negotiate all types of contractual arrangement with U.S. LNG exporters, including long-term contracts, subject to the commercial considerations of the parties.”

According to a Friday report by Reuters, Cheniere Energy Inc., operator of the only currently exporting Lower 48 terminal, Sabine Pass in Louisiana, “has had extensive negotiations with China about increasing U.S.” LNG exports.

Researchers at the University of Texas (UT) at Austin’s Center for Energy Economics recently analyzed research on LNG demand outlooks in China and India. In a report published last month, they wrote that they are less bullish than some are for these two demand centers.

“Despite its environmental issues, coal is a formidable competitor to gas in the industrial sector [in China],” they said. The researchers cited International Energy Agency (IEA) projections that industrial sector coal use in China will remain flat through 2020 and then decline about 20% by 2040 while industrial gas use increases by 32% between 2014 and 2030.

“Two of the factors leading to the IEA’s projected decline in industrial coal use could also apply to natural gas, e.g., rebalancing of the economy towards services and less energy-intensive industries and improved energy efficiency,” the UT researchers wrote. “In the IEA view, the major driver of growth in industrial gas demand is the enforcement of current pollution and climate policies that require switching from coal to gas that is stronger than that seen to date.”

In China a fuel tax would be needed to overcome the economic advantages of coal and encourage switching to natural gas in the industrial sector. “It seems unlikely that the government will burden an already slowing economy with a tax that is high enough to trigger the desired fuel switching,” the researchers said. Also, renewables could take up a share of demand that otherwise would have migrated from coal to natural gas, they said.

In China’s power sector, inroads by natural gas against coal and other fuels/generation sources also face headwinds, the UT researchers wrote, as natural gas must be able to compete on fundamentals. “Coal should continue to be much cheaper than gas; the need for new coal delivery infrastructure is not as great as it is for gas and coal-fired generation is less reliant on imports than gas-fired generation,” they said.

There is pessimism for demand growth in India as well. The country’s fertilizer industry could use more gas, but the pace of demand growth will be slow because of uncertainty over new capacity additions “in an industry that requires major government support to survive,” the UT researchers said.

Outside of India’s fertilizer industry, demand growth will be “muted” because because of “infrastructure and supply impediments; limited duration of current low LNG import prices; limited progress in the push for manufacturing growth to date; constrained access to affordable capital for investment as well as overall impediments to industrial activity,” they said.

*Clarification: In the original article, the Department of Energy (DOE) data cited is through February, which was released a month ago.DOE’s latestLNGMonthly,released Monday with data through March, shows that Lower 48exports declinedfrom February to March.