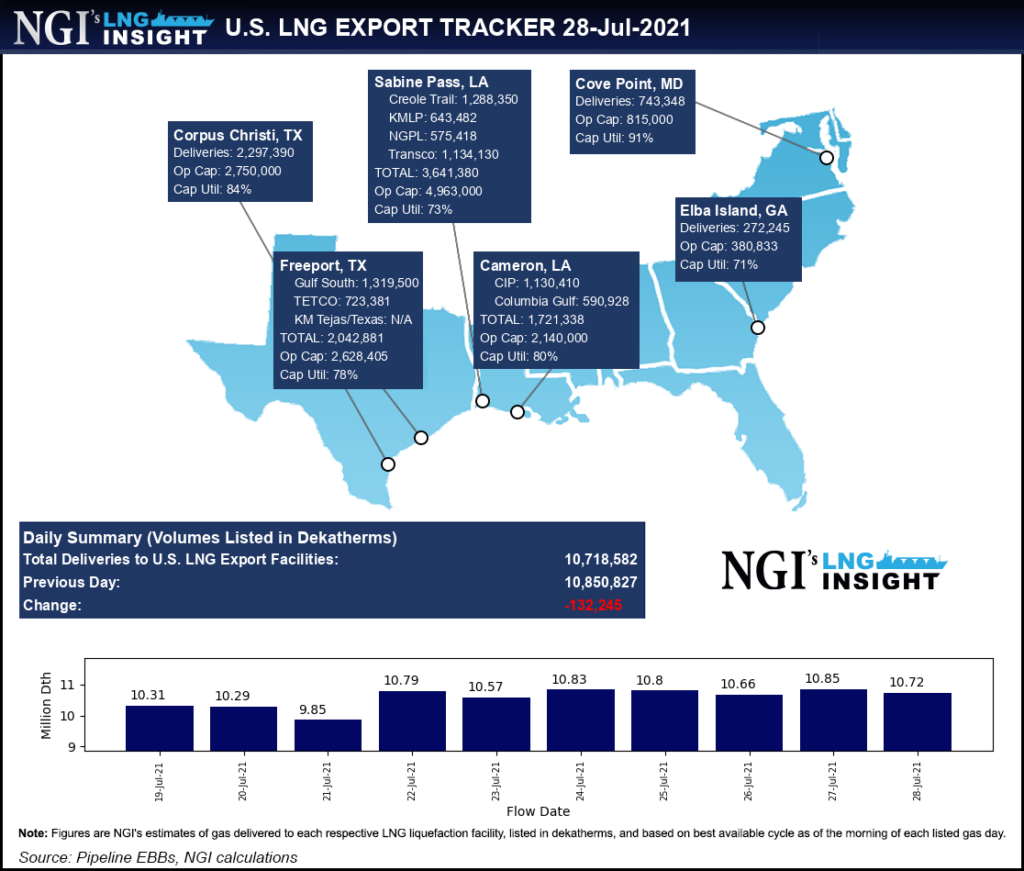 LNG exports averaged 9.6 Bcf/d in the first six months of the year, according to the U.S. Energy Information Administration. That is a stark contrast to last year when demand cratered amid the Covid-19 pandemic, leading some global customers to cancel U.S. cargoes.

According to EIA, first half 2021 exports climbed 42%, or 2.8 Bcf/d, compared with last year. That is more than the amount of new capacity that was added last year.

EIA noted that the final liquefaction units were commissioned at Corpus Christi LNG and Freeport LNG in Texas and Cameron LNG in Louisiana. In addition, the remaining small-scale units were placed into service at Elba Island LNG in Georgia.

“The new units increased total U.S. LNG export capacity by a combined 2.7 Bcf/d for a total peak capacity of 10.8 Bcf/d,” according to EIA.

Meanwhile, high spot prices in Asia and Europe have spurred demand for “flexible” LNG supplies from the United States, EIA said. And while Henry Hub natural gas prices have surged in recent months, EIA noted they are still lower than international natural gas and spot LNG prices this year. That price difference has supported the growth in LNG exports, EIA said. Meanwhile, outages at key facilities abroad, including in Australia and Norway, gave the United States a leg up in the export market.

Asia was the top market for U.S. LNG volumes for the first five months of 2021, accounting for 46% of the total, EIA said. Europe took 37% of the average share in the first five months. Meanwhile, exports to Latin America grew, “particularly to Brazil, which is experiencing its worst drought in more than 90 years,”EIA said.

Exports declined in June to 9.0 Bcf/d because of pipeline maintenance. However, EIA said it expects exports will remain “at high levels” for the remaining months of 2021.

The news follows previous records set by the United States for LNG exports. The nation hit an all-time high in March, exporting 10.5 Bcf/d. In April, exports averaged 9.2 Bcf/d, and EIA estimated an average 10 Bcf/d in May. The figures all marked the highest volumes on record for those months.