U.S. exports of liquefied natural gas (LNG) outstripped natural gas exports by pipeline in November, marking only the second time that has happened in more than 20 years, the U.S. Energy Information Administration’s (EIA) said in a new report. 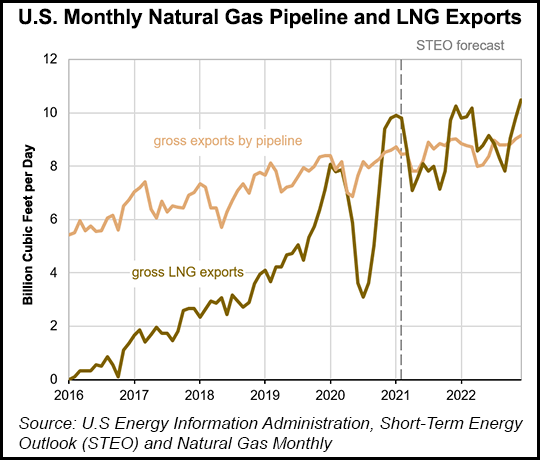 LNG exports exceeded gas delivered via pipeline by nearly 1.2 Bcf/d in November, as demand from Asia for the super-chilled fuel mounted ahead of winter.

Based on shipping data, preliminary estimates for December and January “suggest a continuation of this trend,” EIA said in its Natural Gas Monthly report.

LNG feed gas volumes increased in both December and January, NGI data show, as Asian demand further intensified amid the onset of a particularly harsh stretch of cold temperatures.

When LNG exports last topped those by pipeline, which was last April, they did so by only 0.01 Bcf/d, EIA said. Prior to that, LNG had not eclipsed pipeline exports since 1998.

In its January Short-Term Energy Outlook, EIA forecast that U.S. LNG exports would exceed gas delivered by pipeline in the first and fourth quarters of this year – spanning the typical months of peak demand — and on an annual basis in 2022. The agency said from November through January, monthly U.S. LNG volumes nearly tripled the average levels in the summer months of 2020.

EIA forecast that U.S. LNG exports would average 9.8 Bcf/d this month, on par with January’s record level, before tapering to seasonal lows amid milder temperatures in the spring.

The agency’s outlook calls for LNG exports to average 8.5 Bcf/d over 2021 and climb to 9.2 Bcf/d in 2022 amid continued strong demand from Asia as well as Europe.

The relative ascension of LNG is particularly notable because pipeline exports are strong as well. Total U.S. gross exports by pipeline averaged 7.9 Bcf/d in the first 11 months of 2020, EIA noted, 3% higher than during the same period of 2019.

While pipeline exports to Canada fell 5% in that span, the level of gas piped to Mexico grew substantially, thanks to the final segment of the pipeline system connecting the Permian Basin with Mexico’s Guadalajara region being brought online last year, the agency noted.