Down sharply from a peak of 8.0 Bcf/d in January, U.S. exports of liquefied natural gas (LNG) fell sharply to average just 3.1 Bcf/d in July, according to figures published Tuesday by the Energy Information Administration (EIA). 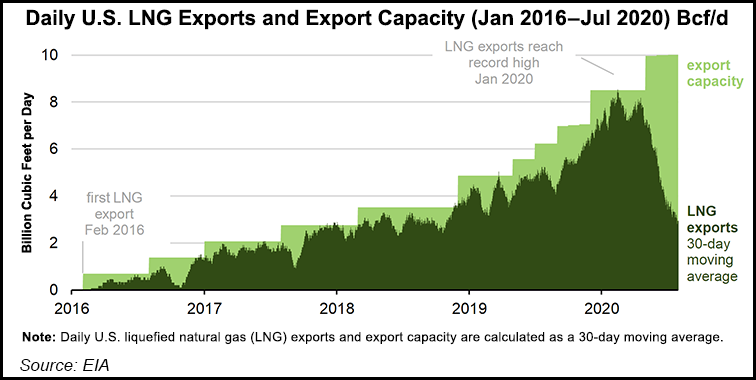 The 3.1 Bcf/d of exports averaged in July roughly matches the volume exported in May 2018, when total U.S. LNG export capacity was around one third of current capacity, the agency said.

The sagging export volumes have coincided with the Covid-19 pandemic that has dramatically dampened economic activity at home and abroad.

“Because most U.S. LNG exports are traded in the global spot market, low global spot and forward prices for natural gas and LNG made exports from the United States uneconomical.”

Cheniere Energy Inc.’s Sabine Pass and Corpus Christi terminals, as well as the Freeport LNG terminal, were the hardest hit, operating at utilization levels of 33%, 28% and 6%, respectively, the agency said.

“Since U.S. LNG export capacity ramped up in 2018, capacity utilization in the summer has averaged more than 90% because of more weather-related LNG demand in the northern hemisphere, which consumes 98% of global LNG,” EIA said. “This summer, EIA forecasts that utilization at U.S. LNG liquefaction facilities will average 35%, or similar to utilization in off-peak months…when seasonal demand tends to be at its lowest level.”

Genscape analyst Josh Garcia said in a note to clients Tuesday that the higher LNG volumes have been incentivized by strengthening natural gas prices at European hubs.

The rising feed gas volumes “have been driven by Freeport LNG’s return to service after no nominations from July 7-29, and a ramp up in deliveries to Corpus Christi LNG,” Garcia said.