As Sempra Infrastructure continues to progress its LNG export terminal projects on the Gulf Coast and in Mexico, President Dan Brouillette said demand for natural gas is also helping influence the investments in alternative fuels. 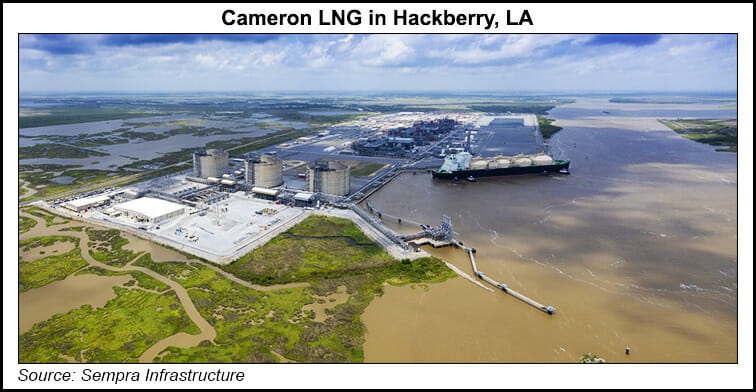 The subsidiary of San Diego-based Sempra and Avangrid Inc. disclosed a potential partnership on Wednesday to explore multiple projects to produce ammonia and hydrogen with renewable electricity. Under the preliminary heads of agreement (HOA), the partners could develop large-scale facilities to create enough net-zero carbon hydrogen, often referred to as green hydrogen when made using renewables, to support domestic and international customers.

Brouillette told NGI that Sempra was interested in exploring hydrogen, in part, as a result of its conversations with potential liquefied natural gas offtakers interested in the Port Arthur LNG project southeast of Houston, and a fourth train at the existing Cameron LNG facility in Louisiana.

“When we’ve talked with potential customers about their needs, especially with Japanese and Korean firms, we’ve heard this is something they would like to aggressively explore,” Brouillette said. “So, we’re going to look at all the options and see which ones make sense.”

Avangrid, a subsidiary of Spain’s Iberdrola Group, serves about 3.1 million U.S. customers on the East Coast through eight electric and gas utilities and a portfolio of renewable generation projects. It is the third largest renewable operator in the United States and is now developing what could be the largest offshore wind farm in the country offshore Massachusetts. The project, Vineyard Wind 1, is estimated to come online in March 2023.

The latest HOA follows a series of initiatives Sempra has for the Cameron LNG facility, including a proposed carbon capture, utilization and sequestration project in Cameron Parish, LA, and agreements to partially power the Cameron terminal with renewable energy.

Brouillette said LNG offtakers, especially European firms wading into the market after Russia’s February invasion of Ukraine, want the most information available about the molecules they may buy.

He added he still sees natural gas as a vital part of the global energy mix and a tool for energy security that will help support the addition of fuel sources, not a full replacement of old ones.

“There isn’t a time in human history where we have completely moved from one fuel source to another,” Brouillette said. “We always transition from a world with less energy to more energy.”

Port Arthur became one of the few Gulf Coast projects to land a potential long-term contract with a European offtaker this year after signing an HOA with German utility RWE AG.