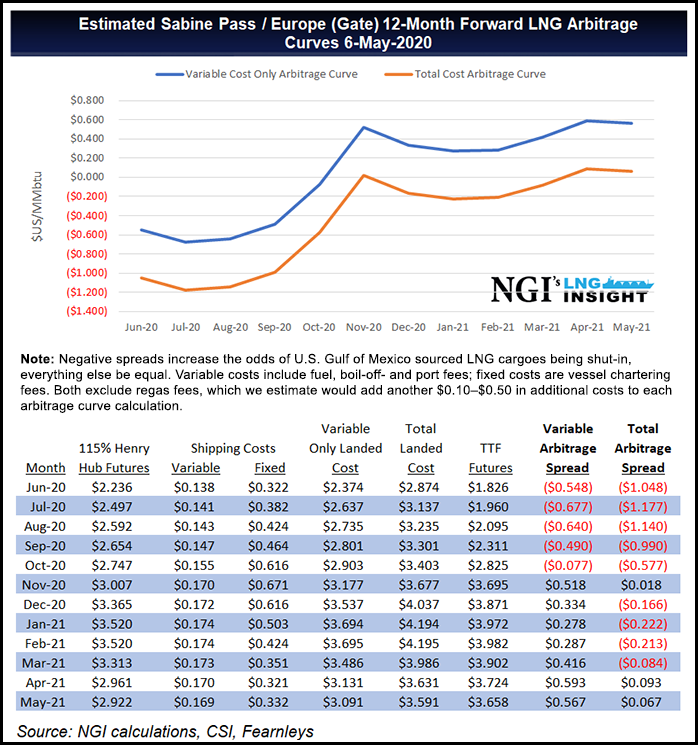 Shipbroker Poten & Partners told NGI that it now expects up to 33 cargoes on the Gulf Coast alone to be canceled in June, compared to a previous estimate of about 25, and cancellations could persist well beyond mid-year. NGI calculations show key European and Asian gas benchmarks trading at around the same price or below Henry Hub through October.

Most domestic LNG supply is tied to the price of Henry Hub. For those that haven’t chartered ships, the costs are steeper to deliver and the price pain is likely to last longer.

“Several of those are Cameron cargoes, and there is still some wheeling and dealing going on around those related to how they’re going to manage them and whether the gas suppliers will sign off on that,” said Poten’s Jason Feer, global head of business intelligence, in noting that some cargoes may not be canceled.

Feer said the fact that all three trains are not yet running at Sempra Energy’s Cameron facility in Louisiana has complicated discussions as the supply contracts don’t allow for cancellation until the facility is operating at full capacity. The third train is expected to come online in the third quarter.

Moreover, under Cameron’s business model, there are more companies with stakes in liquefaction capacity than there are at other terminals like Corpus Christi LNG or Sabine Pass LNG, which are operated by Cheniere Energy Inc. That’s complicating matters at Cameron, Feer said.

Poten has learned of the cancellations from those scheduled to lift the cargoes or from those with knowledge of operations at the liquefaction terminals, Feer said. In all, Poten expects 13 cargoes to be canceled at Corpus Christi, eight at Freeport LNG, six at Sabine Pass and another six at Cameron — all in June — with the potential for more throughout the summer and into fall. While LNG vessels vary in size, they can generally carry about 3 Bcf of gas each voyage.

Feer said there could also be some cancellations at Dominion Energy Inc.’s Cove Point LNG in Maryland. Cove Point, which has the ability to send gas back out into the U.S. pipeline grid, took an import cargo recently, he noted, which may indicate the terminal doesn’t need storage space for exports.

Exporters generally have been tight-lipped about cancellations or production shut-ins.

“Our customers have made some modifications to their production and cargo loading plans under the terms of the tolling agreements in response to current market conditions,” Cameron spokesperson Anya McInnis told NGI. But she added that the company “is not at liberty to discuss those details.”

Cheniere’s management team scoffed at the situation last week as first quarter results were issued but acknowledged some cancellations. However, operations haven’t been upended in any significant way, and it received $53 million in fixed fees on canceled cargoes during the first quarter.

U.S. contracts are more flexible, providing offtakers with an option to cancel generally up to 60 days in advance of lifting in exchange for a fixed fee if cargoes are not taken.

“It’s fairly opaque, there is no central place where people have to declare what’s been cancelled,” Feer said. Some of the cargoes canceled by long-term buyers could be sold in the spot market, and cargoes flagged as canceled for this month are now on loading schedules. However, he said it’s likely there were more cancellations than acknowledged given recent feed gas delivery levels.

Over the last week, pipeline deliveries to Lower 48 terminals have hovered at or below 7 Bcf/d, according to NGI’s LNG Export Tracker, below about 9 Bcf/d earlier this year.

Goldman Sachs said in a research note this week feed gas demand has so far trended 800 MMcf/d below expectations for May. The potential for cargo cancellations in June, Goldman said, could reach up to 3 Bcf/d. Tudor, Pickering, Holt & Co. expects up to 4 Bcf/d of cancellations in June.

Rystad Energy also recently noted that global LNG supply is forecast to reach 380 million metric tons (mmt) this year, or 17 mmt higher than in 2019. Demand, on the other hand, is expected to rise only 6 mmt from 2019 to 359 mmt, which is likely to impact suppliers.

A supply response is also mounting across the globe. LNG terminals from Norway to Russia have announced planned maintenance runs this summer in a sign that they’re willing to curb some output. If oil prices continue to remain low too, Suppliers with contracts linked to oil could also see their margins squeezed, as the prices under those contracts are based on the previous three- to six-month average cost of crude.

ClipperData noted on Thursday that the supply glut is already on sharp display as “ the number of floating LNG cargoes have increased over the last two weeks, reflecting weak demand and high LNG inventory levels at demand hubs.” The firm noted that eight cargoes produced in Nigeria alone have been floating for between three and 25 days across the world.