The safety of U.S. liquids pipelines has improved across several key metrics over the past five years, according to a new joint report from the American Petroleum Institute (API) and the Association of Oil Pipe Lines (AOPL). 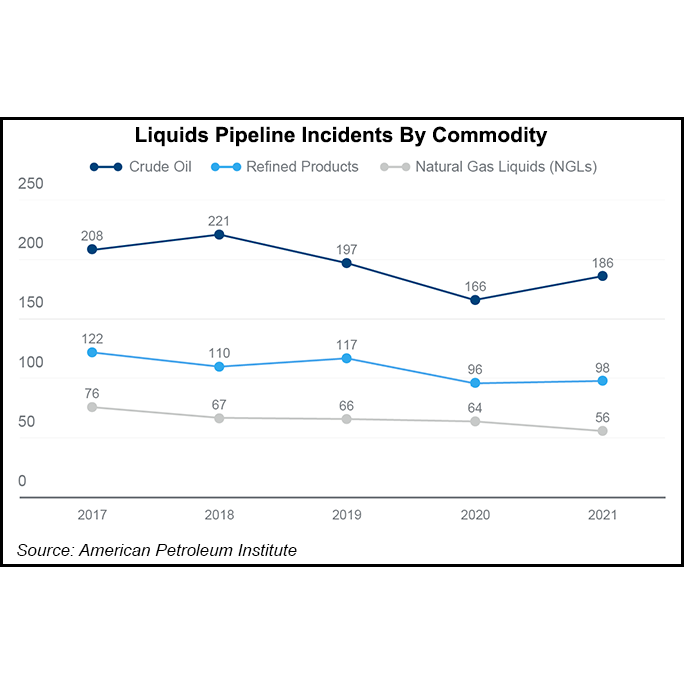 Citing 2017-2021 data tracked and maintained by the U.S. Department of Transportation’s Pipeline and Hazardous Materials Safety Administration, API and AOPL reported a 31% drop in liquids pipeline incidents impacting people or the environment and a 17% decrease in total pipeline incidents.

A 2019 study observed a 36% decline in liquids pipeline incidents.

The drop in the number of incidents noted in the most recent study occurred “even while pipeline mileage and barrels per day” increased nearly 10%, API and AOPL said.

One U.S. midstream company planning to add liquids pipeline and other infrastructure is Enterprise Products Partners LP, whose CEO this week told analysts about $4.6 billion in potential growth projects.

Of the 229,454 miles of liquids pipelines criss-crossing the United States at the end of 2020, 37% carried crude oil, 33% transported natural gas liquids and 28% shipped refined products, API and AOPL said.