With global energy storage deployments poised to hit 500 GW by 2031, the U.S. energy storage market leads its peers on the world stage, according to Wood Mackenzie’s Global Energy Storage Outlook. 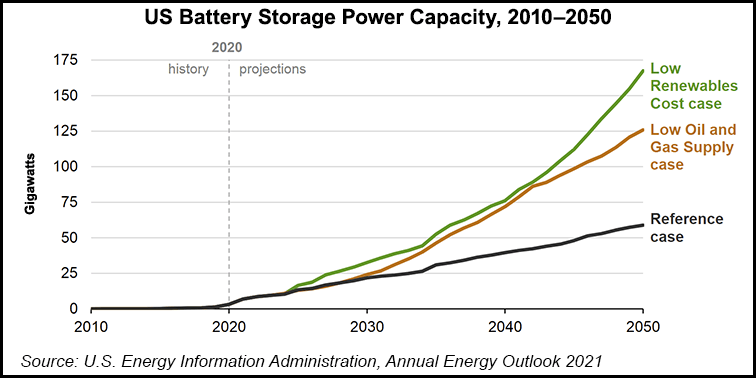 While average installations are expected to hover around 54 GWh/year through 2031, analysts said they project 2022 and 2023 energy storage additions would fall about 30% because of disruptions from the U.S. Department of Commerce’s investigation into whether China is sending solar parts through Southeast Asian countries to avoid taxes.

Several utility-scale solar projects in the United States were postponed or called off altogether earlier this year.

The United States, however, is expected to add about 600 GWh of energy storage to the market by 2031, Wood Mackenzie reported.

Behind the United States in terms of forecasted energy storage installations is China, which has an energy storage outlook of more than 420 GWh through 2031, analysts said.

China’s latest five-year plan sets the country up for large-scale development of energy storage as the People’s Republic targets carbon neutrality. According to Wood Mackenzie, the plan could help system costs decrease by more than 30% by 2025 via improved technology performance.

Since March, when the plan was released, 12 provinces and cities in China have announced a total of 40 GW in energy storage installation to achieve by 2025.

Meanwhile, as countries in Europe face coming natural gas shortages, the region’s grid-scale storage market dawdles compared to the United States and China, according to analysts. The region is expected to see about 159 GWh in energy storage installations by 2031.

“Growth has stalled in Europe as regulatory barriers fail to improve storage project economics,” Shreve said. “In addition, limited access to power markets and a lack of revenue stacking opportunities, combined with a lack of capacity market auctions, has lowered investment for grid-scale storage assets in Europe.”

Germany, however, which in late June entered the “alert” phase of its emergency plan in response to reduced Russian flows and liquefied natural gas imports, is expected to outpace the rest of the continent and grow to become the third largest energy storage market by 2030 after the United States and China, according to Wood Mackenzie analysts.

The plan, launched in May of 2022 in response to energy market disruptions caused by Russia’s invasion of Ukraine, has positioned the continent to gain around 12 GWh, Wood Mackenzie analysts said.

“While REPowerEU does not set out a specific target for energy storage, higher renewable supply targets will drive demand for flexible power solutions, including energy storage assets,” Shreve said.