Much is made of natural gas production growth from the Marcellus and Utica shales, but in a recent note, Societe Generale’s Breanne Dougherty reminded the industry that other basins are also important supply sources. 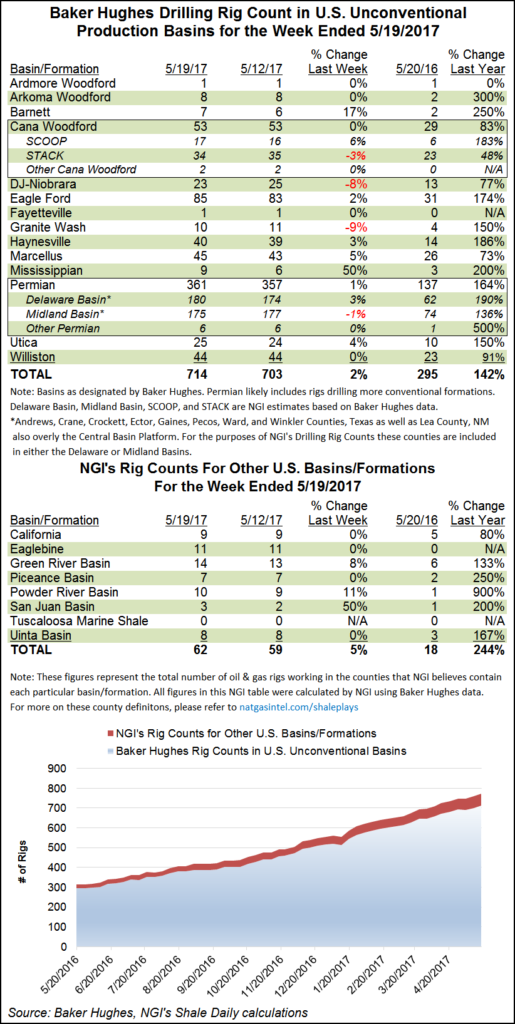 “While the Northeast has been the clear production growth engine for the U.S. gas market over the last few years, as we look at recent activity, we see gas growth out of the Permian, and a revitalization of drilling in the Haynesville, as being critical contributors to our near-term growth outlook,” Dougherty said in a recent client note.

During the week ending Friday, the Baker Hughes Inc. (BHI) U.S. land-based rig count climbed by 14 units to 874. The Marcellus added two rigs and the Utica added one. The Permian Basin rig count grew by four, and the Haynesville added one unit, reaching the milestone of 40 rigs running, which is way more than the 14 it had one year ago.

In his latest industry column, Don Briggs, president of the Louisiana Oil and Gas Association, noted the Haynesville’s not-too-long-ago dormancy while the Marcellus and Utica took the limelight. But things are changing.

“Due to the Northeast’s lack of pipeline infrastructure and their shut-in production, the Haynesville is becoming more attractive again,” Briggs wrote. “Louisiana’s access to the Gulf, abundance of pipelines and processing plants, along with the industry’s advancements in drilling technology, have led to a resurgence in the Haynesville Shale. Just last March, output from the Haynesville fell to a six-year low. Production in the formation will now climb for the seventh straight month, reaching the highest since October 2014.”

The resurgence in Haynesville Shale activity is highlighted in a new NGI special report.

The Permian is stepping up its game, too, with a steep increase in drilling activity. More gas is coming, BTU Analytics said. “Permian producers are indicating that additional production growth will be back-weighted to the end of the year,” wrote BTU analyst Jason Slingsby in a recent note. “But the growth is coming, and those that aren’t prepared for it will feel the pain beginning later this year.”