Lower 48 oil and natural gas permitting during November plunged by nearly one-third month/month, with activity in the Permian Basin and Haynesville Shale sharply down, according to Evercore ISI. 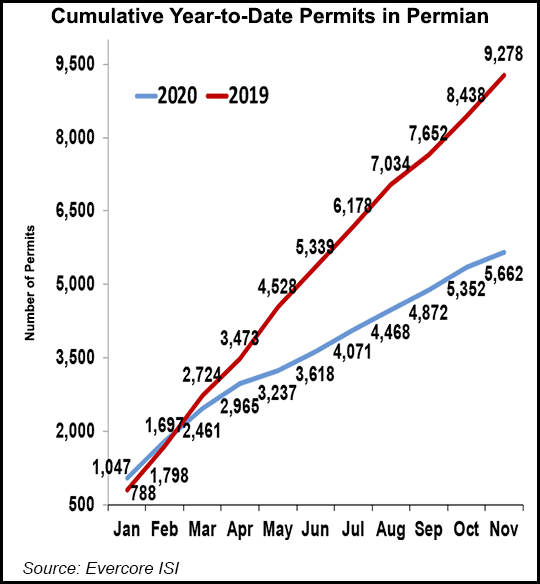 Evercore analysts led by James West compile a monthly review of federal and state permitting. According to the data, exploration and production (E&P) companies requested 32% fewer permits during November than in October.

Permian permitting fell by 35% from October, with large-cap E&Ps approved for only 67 wells, down 63%. Haynesville requests overall fell by 42%.

Within the Lower 48 oil formations, 877 permits were approved in November, down by one-third from October.

Most of the approvals for oil permits were for the Permian, Bakken and Eagle Ford shales. While the Permian continued to lead the way, there were 310 permits approved, off by 170 from October.

The energy majors were awarded only eight oil permits in the Permian during November, down 67% month/month, while the small- to mid-cap E&Ps gained approval for 77, up by 5%. Of the 310 permits given a thumb’s up, 52% were for Texas development.

Meanwhile, approved Bakken oil permits fell by 33% from October to 49. Eagle Ford permitting was down 12% to 99.

Natural Gas Down Too

On the natural gas side, E&P permitting also edged lower in November, down by 31% from October. Despite the decline, the gassy Haynesville overall remained 20% above the trough in May, according to Evercore.

“Environmental agencies approved 151 permits in gas formations” last month, down 51% from October, with Haynesville permits at 59, down by 43%. Overall, private E&Ps submitted 39 permits to drill in the Haynesville, which was 30% lower than in October.

In the Marcellus Shale, E&Ps were awarded 64 permits, 30% fewer than in October, with 75% awarded to public E&Ps. The sister Utica Shale saw its gas permit count inch up 4% month/month to 28.

Year-to-date (YTD) through November, overall oil and gas permitting fell year/year by 66% to 17,487, according to Evercore. Eighty-nine percent of the total was to develop oil prospects.

The biggest decline YTD has been in the Powder River Basin, “where only 643 permits have been granted,” which is 97% lower than for the first 11 months of 2019.

Meanwhile, Permian permitting YTD contracted by 39% year/year to 5,662. Activity mostly decelerated in the heart of the Texas formation, off 47%. There was stronger oil permitting in New Mexico, up 14% year/year to 2,003.

Gas permitting YTD was down by half year/year to 1,945. The declines were primarily the “result of the sharp contraction in the Marcellus to 748,” where permits had fallen by 50% from January-November 2019.

“Applications for this activity decelerated mainly in the Permian and the Eagle Ford,” analysts said. Permian P&A posted a decline to 300, down from 881 in October. Twenty-three percent of the P&A permits were in New Mexico.

Still, the Permian was in the lead YTD, Evercore noted. A total of 7,612 P&A permits had been approved through November, a 138% year/year increase.