The lineup to launch Canadian liquefied natural gas (LNG) exports spread Monday to Quebec, where a new Montreal firm created by U.S. investors is setting out to build a terminal and pipeline by 2021. 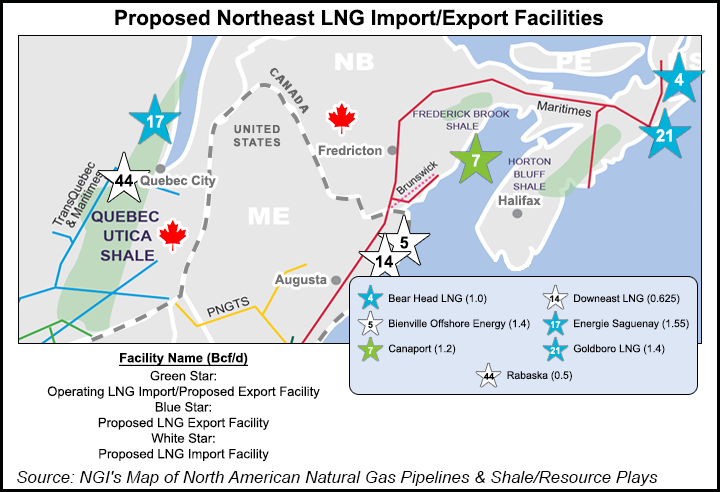 GNL Quebec Inc. entered the regulatory process by presenting an application to the National Energy Board (NEB) for a license to let a proposed terminal called Energie Saguenay load 160 tankers per year with Canadian production.

The export package, currently forecast to cost C$7 billion (US$6.2 billion), includes a conversion plant to make LNG equivalent to 1.55 Bcf/d and a 450-kilometer (270-mile) pipeline to relay supplies to its remote site.

Named after its location 210 kilometers (130 miles) northeast of Quebec City, the terminal is a proposed addition to a year-round industrial deep-water port on the Saguenay River, a tributary of the St. Lawrence River sea highway to the Atlantic Ocean.

GNL Quebec is a brainchild of Freestone International LLC and Breyer Capital LLC, teamed up for the gas-export project as a joint venture called Ruby River Capital LLC, which owns the Montreal firm.

GNL Quebec’s associated pipeline project is in early planning stages as a northeast-bound extension of TransCanada Corp.’s eastern gas Mainline, and would eventually include expert gas-transmission specialty firms, according to the NEB filing.

The project is presented as an eastern international outlet for Western Canadian gas that has been pushed out of traditional markets in Ontario, Quebec and the northeastern United States by lower cost U.S. shale production.

“Gas supplies from the WCSB should be readily available for the project due to the changing North American market dynamics largely driven by gas producing growth in the Marcellus play in the U.S.,” said a supporting study by Navigant Consulting Inc.

“LNG should provide a new market, at least in the mid-term, for excess natural gas supplies and may even overtake fuel switching from coal [power] plant requirements as the primary incremental natural gas.”

Although GNL Quebec seeks a 25-year NEB export license for a total of 16.2 Tcf of gas, no reliance is placed on potential supplies from its home province or its Canadian Maritimes neighbors, Nova Scotia and New Brunswick.

A politically popular moratorium against horizontal drilling and hydraulic fracturing into shale formations remains in force in Quebec.

The Nova Scotia government has declared intentions to enact prohibition against the technology. In New Brunswick, the campaign platform used by the Liberal party to wrest power away from the Conservatives in the provincial election held Sept. 22 expressed a dim view of fracking.

GNL Quebec’s entry raised the number of Canadian LNG export terminal projects that have advanced to the stage of requesting 20- to 25-year gas export licenses to 20.

Total supplies sought by the lineup have swelled to 383 Tcf that would be shipped overseas at a combined rate of 40 Bcf/d. But the new U.S.-backed Quebec project suggested not even building all the terminals as proposed would strain astronomical Canadian and U.S. reserves made possible by the industry’s horizontal production technology.