U.S. imports of Canadian heavy crude oil are expected to increase over the next two years, but the pace of oilsands growth in Canada is also expected to slow because the declining number of projects under active development, according to IHS Markit. 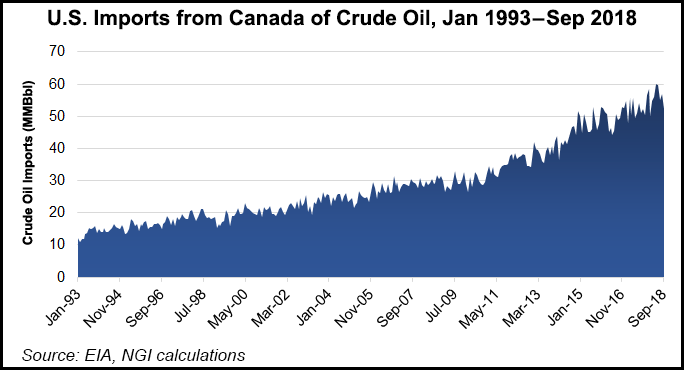 In the consultancy’s 15-page report, “Looking North: A U.S. Perspective on Canadian Heavy Oil,” Director Vijay Muralidharan and Vice President Kevin Birn projected that domestic imports of Canadian heavy oil would increase to more than 3.0 million b/d by 2020 from 2.5 million b/d in 2017.

“Yet with oilsands projects taking two years or more before production can be brought online, a slower period of growth at least to the early part of the next decade is almost assured,” Muralidharan and Birn wrote. Meanwhile, the Organization of the Petroleum Exporting Countries (OPEC) “could help moderate the heavy oil market, but there are quality differences between Middle Eastern heavy oil and the much heavier grades found in the Americas.

“If this trend continues, it could set the stage for a protracted period of a tighter heavy oil market in the world and a greater importance for Canadian output to U.S. refiners — at least in the medium term.”

The authors added that logistical issues have impaired the ability of meaningful volumes of Canadian supply to access U.S. West Coast and East Coast markets.

“Although some limited rail has made its way from Canada to the U.S. East Coast, this market traditionally processes lighter crudes and lacks the complexity for heavier grades of oil. On the U.S. West Coast, the majority of heavy demand has been met by domestic Californian or Alaskan output. However, as Californian and Alaskan production has slowly declined, offshore imports have crept up, which could provide future opportunities for Canadian heavy oil.”

U.S. onshore oil and natural gas production is set to rise from October to November, propelled by supply growth in the Permian Basin and Haynesville Shale, according to updated projections Monday from the U.S. Energy Information Administration (EIA). Natural gas production from seven key U.S. producing regions — the Anadarko, Appalachia and Permian basins, along…