As part of a “U.S. Century” fueled by global shale gas dominance, domestic natural gas prices will rise and volatility will return in the next three to five years, a JP Morgan executive told participants at the LDC Gas Forum Mid-Continent in Chicago Tuesday. Colin Fenton did add the caveat that the gas volatility will not be the same as global oil prices, however. 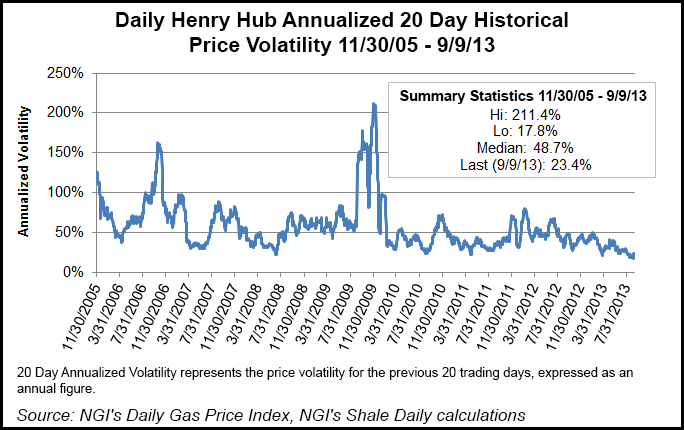 Bullish on U.S. shale’s future and the fact that global demand will drive production, infrastructure investment and prices, Fenton, managing director and global head of commodities research and strategy, said the U.S. gas market “really wants to get up to an average price of $5.50-6.50/Mcf, although natural gas is not likely to have the kind of volatility that oil has.” He thinks the “manufacturing aspects” of shale gas will temper the price volatility.

Fenton said the U.S. energy markets have to get away from thinking in terms of “floors and ceilings” for natural gas prices. For him, past talk of $4.50 to $6.50 as the floors and ceilings will not be relevant in the future. “Why is a $6.50 ceiling such a sacrosanct thing?” he said, considering the voracious appetites for gas that are growing throughout Asia, led by China and Japan. Since the Fukushima earthquake/tsunami that wrecked Japan’s nuclear power industry, gas consumption in the nation with the world’s third-largest economy has increased 50% in three years, and China, because of major air quality concerns, will be consuming as much gas as Japan by 2020, Fenton said.

A frequent traveler to China, Fenton said he is bullish on what globally driven demand for U.S. gas supplies will do to prices, an ongoing gradual compression of regional price spreads, the use of natural gas in transportation and the unlocking of “enormous reserves” in California. Increasingly, global developments, including continuing unrest in the Middle East even if the current Syrian chemical weapons issue is resolved, will drive up global oil prices and eventually U.S. natural gas prices, he said.

While predicting the next potential economic recession after the 2016 U.S. presidential election , starting the next year, Fenton said oil prices well above $130 to $140/bbl will emerge in 2014-2015, with gas hitting as high as $7-8/Mcf in late 2016. “Most people think that is impossible,” he said. “And they are totally unprepared for this,” which ignores the fact that any one of a number of international events can drive up worldwide energy price volatility.

Since December 2005, the price of natural gas at the Henry Hub has posted a median historical price volatility of 48.7%, based on daily price changes over this time, according toNGI‘s Daily Gas Price Index. However, volatility has been much calmer at Henry in recent months, with a nearly eight-year low of 17.8% registered on Sept. 6.

“The United States will be far and away the world’s greatest power of the 21st century, and its going to happen to [U.S.] natural gas as part of this,” Fenton added. “Natural gas is the most important [global] commodity by far. When U.S. LNG exports begin in 2015-17, that is when we will see the higher gas prices kick in.

“Pittsburgh, a city whose professional football team is named the ‘Steelers’ now has an economy with a higher correlation to natural gas prices than steel,” said Fenton, attempting to emphasize how much the U.S. and the world’s economic activity in the future will be tied to natural gas and the U.S. shale plays as other parts of the world try to catch up with their own shale development (in Argentina, Poland and South Africa).