Raymond James energy analysts called a “mayday” on gas prices in September, cutting their price forecast to $7.50/Mcf from $10, and they said that the rig count would fall (see Daily GPI, Sept. 9).

J. Marshall Adkins, James M. Rollyson and John Fitzgerald said Monday in their Stat of the Week that since cutting the 2009 rig count forecast on the heels of a reduced gas outlook, “the economic situation has severely deteriorated. Additionally, reported U.S. natural gas storage injections remain bearish, despite more than 200 Bcf of hurricane-related production shut-ins in the Gulf of Mexico.”

The trio now anticipates “the U.S. rig count will fall by more than 10% year/year (y/y) in 2009 with a 40% peak to trough decline in the natural gas rig count. We expect the overall domestic rig count to fall 30% from its highs. Given our view that U.S. natural gas prices will remain depressed into late 2009, we suspect the rig count should reach a bottom in early/mid 2010.”

SunTrust Robinson Humphrey/the Gerdes Group (STRH) noted Monday that in the past four weeks, the U.S. gas rig count has declined by an average of 13 rigs a week. The STRH team also expects the rig count to fall and “likely accelerate through year-end, leaving the gas rig count at 1,400 as we enter ’09.”

“The recent economic crisis has affected our U.S. natural gas outlook in two ways,” wrote the Raymond James analysts. “A weak economy turns our gas model even more bearish, and it has put a strain on [exploration and production] E&P customers’ spending. If we now assume just flattish demand growth, as opposed to a 1.5 Bcf/d increase for natural gas, it appears that domestic natural gas storage is shaping up to be oversupplied by nearly 1 Tcf during the next 12 months.

To reduce the amount of gas, the supply reduction will have to be higher than initially forecast, said Adkins and his colleagues.

“This has to be achieved by a larger decline in natural gas drilling and/or production shut-ins,” the analysts wrote. “Tightness in the credit markets has also put a strain on E&P firms. Higher credit spreads and difficult equity markets have raised capital costs for oil and gas companies. Customers are now focused on meeting debt covenants and shoring up balance sheets. Without the ability to outspend its cash flow like in years’ past, expect [capital spending] budgets to continue being revised downward, a bad sign for the rig industry.”

Even a cold winter similar to 2007-2008’s would not be enough to save gas prices and the rig count from melting down in 2009, said the trio.

Assuming the rig count holds up into holiday season, “it appears that we won’t see a negative y/y supply response until at least mid-2009, much too late to prevent the market from reaching full storage,” they wrote. “As the market realizes the problem, we expect further pressure on gas prices excluding a short-term bounce as the winter season kicks off.”

The analysts cautioned about not being “fooled by recent bullish activity data points.” All industry data indicates that drilling activity is “very strong” for now and recent rig permit data remains strong. “We still expect drilling activity to hold up into December as the many rigs are on contract and several new-builds are still scheduled to hit the market.

“Assuming capital expenditure budgets aren’t slashed much sooner, we would anticipate the decline to begin as activity takes its hiatus during the year-end holiday season. Only this time, they aren’t likely to bounce back after New Year’s, but rather continue to decline throughout 2009 and potentially into 2010.”

The Raymond James analysts also cautioned that the market “may need to take prices even lower to rebalance the system. In other words, if pressed, we would probably take the under on our new gas price forecast.” 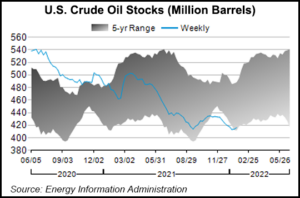