Policies and regulations in the U.S. oil and natural gas patch, led by Texas, are viewed as substantially more favorable to investment than in Canada, according to the latest survey by the Fraser Institute. 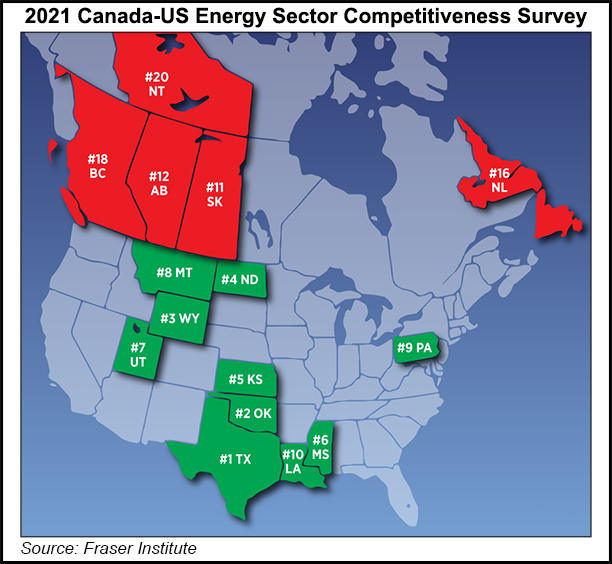 The 2021 Canada-US Energy Sector Competitiveness Survey by the Vancouver-based think tank asked 71 senior executives in the petroleum sector to rank 22 North American producing jurisdictions, including 17 states and five provinces/territories, in terms of investment attractiveness for exploration and production.

Respondents assigned scores on each of 16 questions pertaining to factors known to affect investment decisions, with these scores used to formulate a policy perception index for each jurisdiction.

The executives ranked Texas as the most attractive for oil and gas investment, followed in order by Oklahoma, Wyoming, North Dakota and Kansas. Next came Mississippi, Utah, Montana, Pennsylvania and Louisiana.

The Gulf of Mexico ranked 13th and the Alaska offshore was 19th. The Alaska onshore, meanwhile, ranked 17th.

No Canadian province or territory cracked the top 10, with Saskatchewan and Alberta ranking 11th and 12th, respectively. The combined jurisdiction of Newfoundland and Labrador ranked 16th in investment attractiveness, followed by British Columbia (18th) and the Northwest Territories (20th).

Other barriers to investment include high tax rates and concerns over political stability and security of personnel and equipment.

Researchers highlighted that only 13% and 20% of respondents, respectively, cited environmental regulatory uncertainty as a deterrent to investment in Oklahoma and Texas, versus 65% for Alberta.

“Likewise, 56% of respondents identified the cost of regulatory compliance as a deterrent to investment in Alberta compared to just 9% for first-place Texas,” researchers said.

“The message from investors is clear — Canada’s onerous and uncertain regulatory environment continues to hurt the investment attractiveness of the country’s oil and gas industry,” said Fraser’s Elmira Aliakbari, director of the Centre for Natural Resource Studies.

Researchers noted, however, that all Canadian provinces improved in their policy scores relative to last year’s survey, due mainly to perceived improvements in fiscal and taxation areas.

“Policies matter, and when investors are clearly indicating they would rather invest in American states instead of Canadian jurisdictions, policymakers should take note,” said Fraser policy analyst Jairo Yunis.

All told, the U.S. jurisdictions outperformed their Canadian counterparts on 14 of the 16 indicators used to formulate the policy perception index.

“Our analysis of the 2021 survey results indicates that, despite a change in government in the United States, the extent of negative sentiment regarding key factors driving petroleum investment decisions continues to be higher in Canada than in the U.S.,” researchers said.

This result “is likely…reflective of a number of regulatory changes in recent years that have resulted in a less competitive environment when compared to many competing U.S. jurisdictions.

“Despite improvements in the fiscal and taxation areas, investors continue to perceive Canada’s regulatory environment as onerous compared to many that in competing U.S. jurisdictions.”