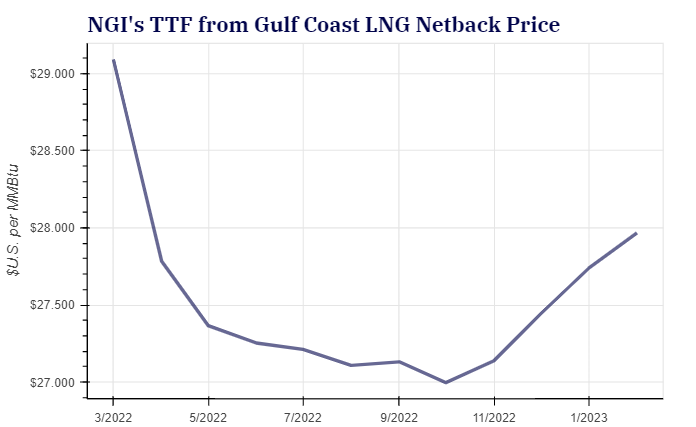 “The United States and the European Union (EU) are working jointly towards continued, sufficient and timely supply of natural gas to the EU from diverse sources across the globe to avoid supply shocks, including those that could result from a further Russian invasion of Ukraine,” the leaders said in a joint statement.

The United States is already Europe’s top LNG supplier. The White House previously confirmed that it was working on contingency plans in the event Russia cuts off natural gas supply to the continent if a broader conflict with Ukraine occurs. Europe imports about a third of its natural gas from Russia, and the United States has been in discussions with top energy producers about securing additional supplies.

“LNG in the short term can enhance security of supply while we continue to enable the transition to net-zero emissions,” Biden and von der Leyen said. “The European Commission will work for improved transparency and utilization of LNG terminals in the EU.”

The standoff between Russia and Ukraine is happening at a time when European natural gas storage inventories are at historically low levels and global natural gas prices have been extraordinarily volatile. The leaders pledged to further explore the role of storage in security of supply and called on all major energy producers worldwide to help ensure the market is stable.

European natural gas prices have been mixed in recent days as pipeline imports from Norway and Russia oscillated, Asian buyers returned to the spot market to refill inventories and the markets wagered on how much risk to bake into prices as geopolitical tensions persist.

The Center for LNG, a U.S. trade group, seized on the joint statement to argue that American natural gas exports are working in the public interest by providing security benefits domestically and abroad.

“Europe’s growing energy crisis, combined with LNG’s critical role in helping the world achieve its climate goals, underscore the need for additional LNG export capacity in the United States,” said CLNG Executive Director Charlie Riedl. “U.S. LNG is not the sole solution to the EU’s energy supply crunch, but this situation would be far worse without U.S. LNG.”

While the bulk of U.S. LNG exports went to Asia between January and November of last year, Europe imported 31.4% of all American cargoes during that time, according to NGI data.

“Energy security is national security, and the United States is well-positioned to assist European allies in a manner that ensures reliable and affordable energy for all while also advancing shared environmental goals,” said the U.S. Chamber of Commerce in response to the joint statement.