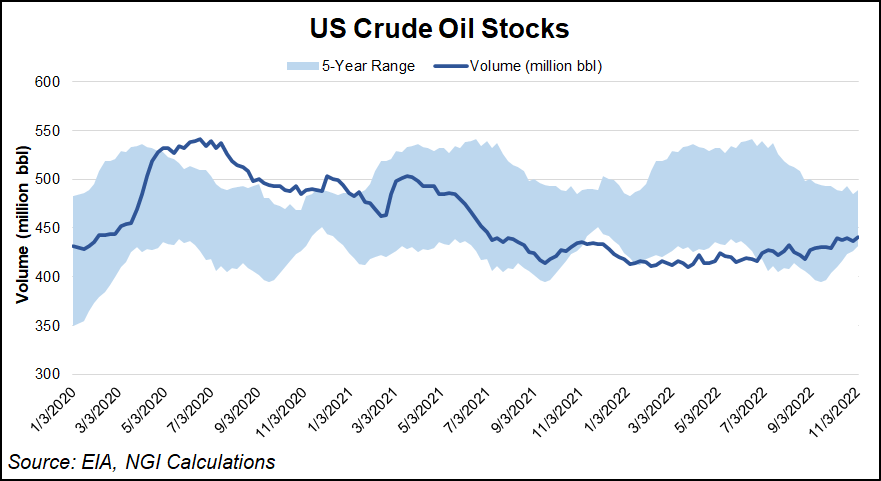 The Energy Information Administration (EIA) said Wednesday that output for the week ended Nov. 4 climbed by 200,000 b/d from the previous week to 12.1 million b/d. That brought production close to the pandemic-era high of 12.2 million b/d reached over the summer, data from EIA’s latest Weekly Petroleum Status Report showed.

The increase came alongside a bump in demand, with overall consumption of petroleum products up 4% week/week. The EIA print followed President Biden’s comments last week that that energy majors are focused more on profits than aligning supply/demand – following multiple third-quarter earnings reports showing record results and lower EIA production numbers through most of the fall.

ConocoPhillips, for one, said its profit nearly doubled from a year earlier, while ExxonMobil posted record earnings. The companies, along with several peers, said they are working to meet demand. But they also are cautiously walking a fine line between serving up ample supply and overshooting at a time when the United States and other countries are gradually transitioning to renewable fuels and the global economy shows signs of weakening. Oil demand typically tapers amid recessions.

Exploration and production (E&P) companies are grappling with lofty inflation and labor shortages. These key issues, along with supply chain disruptions caused by the pandemic, have fueled price increases across the United States and Europe – and elsewhere – galvanizing central banks to drive up interest rates to tame inflation. But in the process of boosting rates aggressively, policymakers have historically hastened the onset of recessions.

“Inflation and supply chain constraints continue across the entire economy and our industry. This is particularly true in the U.S. shale, where rapidly escalating costs combined with extremely tight supply are limiting the pace of industry-wide production growth,” ConocoPhillips CEO Ryan Lance said on the company’s earnings call last week.

Indeed, even though demand has returned to pre-pandemic levels, production remains substantially below the record level of 13.1 million b/d reached in March 2020, just prior to widespread coronavirus outbreaks.

U.S. commercial crude inventories, excluding those in the Strategic Petroleum Reserve, increased by 3.9 million bbl from the previous week. Still, at 440.8 million bbl, stocks are about 3% below the five-year average, EIA said.

Global demand, while expected to soften some late this year and into next among economic headwinds, is still projected to increase for 2022 and next year, eclipsing pre-pandemic levels in 2023, according to outlooks from the International Energy Agency and OPEC.

Supply, however, is likely to decline given recent moves by the cartel and its allies known as OPEC-plus.

OPEC-plus members said they aim to cut their collective production by up to 2.0 million b/d this month. In addition to inflationary pressures in the United States and Europe, the oil-producer group cited ongoing coronavirus-related lockdowns in China that threaten to further slow Asia’s economy. Russian output also is under pressure amid Western sanctions against it because of the Kremlin’s war in Ukraine.

Long term, however, OPEC researchers in an annual report last week said they expect strong global oil demand over the next two decades as developing countries’ populations rapidly expand. This, they estimated, requires global oil industry investment of $12.1 trillion between now and 2045. That marked a $300 billion increase from OPEC’s forecast last year.

ConocoPhillips’ Lance agreed that, despite the expected rising prominence of renewables, more fossil fuel output is needed – from the Lower 48 and internationally – in coming years.

“The world is going to need investments in medium- and long-cycle production in addition to U.S. shale plays,” he said on the earnings call. “A successful energy transition must meet society’s fundamental need for secure, reliable and affordable energy while progressing to a lower carbon future.”