U.S. natural gas and oil reserves each increased by 9% in 2013 at a lower cost than in 2012, primarily because of gains by the largest independents, Ernst & Young LLP (EY) revealed in its latest annual review. 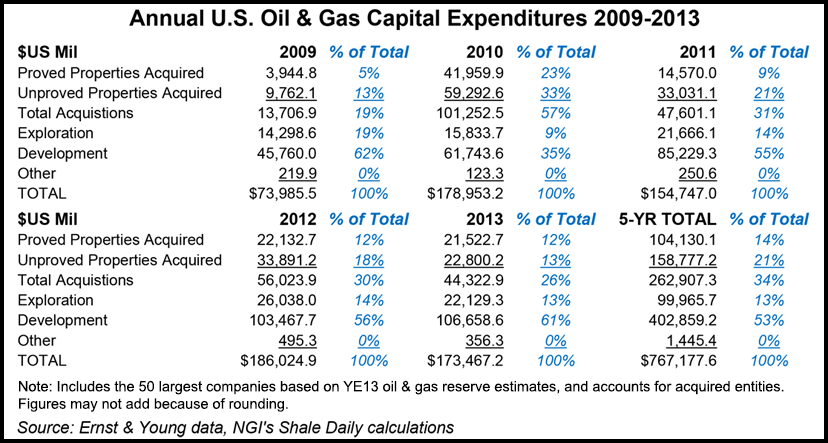 Domestic exploration and production (E&P) operators are “emerging from years of volatility prompted by the global financial crisis and subsequent recession,” which when combined with ever better technology allowed the twin gains in reserves. Those reserves increases came despite a 7% decline in capital spending from 2012.

The study is an analysis of reserves disclosure information reported to the U.S. Securities and Exchange Commission. Upstream results for the five-year period from 2009 through 2013 were reviewed for the largest 50 companies, based on 2013 end-of-year reserve estimates, which generally are representative of the domestic E&P industry as a whole.

“The promising oil and natural gas reserves, and profit increases, are certainly signs that the industry is enjoying more stability than it has in recent years,” said EY’s U.S. Oil & Gas Leader Deborah Byers. “While we saw lower capital expenditure numbers in 2013, that is due in part to the advancement in technologies and processes that are making exploration and production less expensive and more efficient.”

“Large independents accounted for the largest absolute increases in oil and gas reserves in 2013, though the gas reserves still remain below the level we saw in 2011,” Byers said.

Compared with 2012, total capital expenditures declined 7% to $173.5 billion, driven by lower costs for unproved property acquisitions and exploration. Proved reserve acquisition costs, however, rose 57% to $16.88/boe from $10.76, as most transactions were centered around oil reserves.

Over the five-year period, EY found that growth through acquisitions has been around 40% more economical than finding and development (F&D) additions, with proved reserve acquisition costs averaging $11.28/boe, versus $19.44 for F&D.

All three peer groups in 2013 had an increase in F&D spending, but all three also spent less on exploration.

End-of-year oil reserves have increased in each year of the past five years, reaching 25.4 billion bbl in 2013. After decreasing in 2012 because of downward reserve revisions related to depressed gas prices, end-of-year gas reserves rose to 178.7 Tcf in 2013. Even with better pricing, gas production dipped slightly for the first time in the study’s five-year period.

However, extensions and discoveries for both oil and gas reserves in 2013 were the highest of the five-year study period. Additions for oil reserves encompassed 4.1 billion bbl in 2013 and contributed to an oil production replacement rate of 222%, excluding purchases and sales. Extensions and discoveries of 29.9 Tcf were reported for gas reserves in 2013, and the production replacement rate was 229%, excluding purchases and sales.