The domestic oil and natural gas industry likely will see “massive” cash flow increases over the coming years, as the two-year mentality to shrink rapidly shifts back to growth. 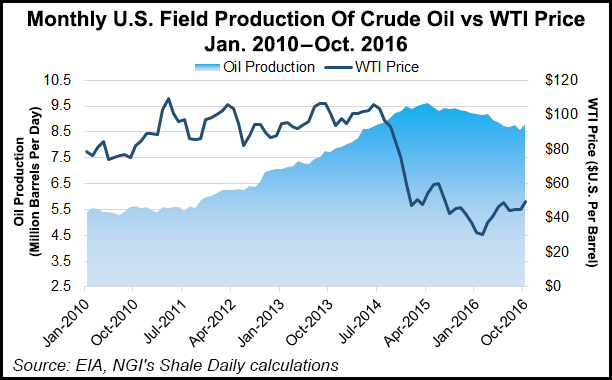 Investor sentiment clearly is more bullish today than it has been since late 2014, but many “severely underestimate the leverage that is inherent in the oil and gas industry,” said Raymond James & Associates analysts in a note Monday. “This is the bottom of a generational downturn, and investors should not be surprised that near breakeven cash flows from the industry can see massive increases in cash flow in the coming years.”

In fact, this year may mark the largest growth in U.S. exploration and production (E&P) cash flows over the past 15 years, “with cash flows and potentially capital spending both doubling,” said analysts Praveen Narra, J. Marshall Adkins and Anthony Diaz. As the E&P mentality to embrace thrift comes to an end, the current forecasts are for capital expenditures (capex) likely rising 60% on the strip.

“This is setting up U.S. E&P cash flows and capex for a massive surge in 2017,” analysts said. “Given the depth of the downturn and the conservatism that had been built into the complex, the snapback in cash flows and capex in the U.S. is likely to be far more pronounced than most expect.” The analyst team is holding to a forecast in September that 2017 cash flow and spending would trend much higher.

Investors often rely on E&P capex announcements and spending surveys to dictate how much oilfield activity and oil service revenues may increase. However, because of today’s volatile environment, those announcement may be out the window. Consensus estimates “appear to be well short of reflecting even today’s environment, suggesting a wave of significant estimate revisions are on the immediate horizon,” said the Raymond James team.

For background, Raymond James’ E&P cash flow and spending model essentially treats the entire domestic upstream complex as if it were only one company. The model is driven by key top-down assumptions, including forecasted oil/natural gas production, commodity prices, hedging activity, basis differentials and oilfield service costs. Assumptions generally are driven by public company data, but the team adjusts the model to reflect the entire industry (private and public).

Commodity prices are a tailwind, but hedging and costs still will cause headwinds. Given the bullish outlook on oil prices, an overall increase in hedging may keep E&Ps from benefiting fully from the commodity price “revival” expected this year. Another thing to watch are rising lease operating expenses (LOE).

“While certainly some of this is structural and the E&Ps will likely capture some level of efficiencies through the next cycle, LOEs are expected to be on the rise again,” said analysts. “Specifically, with production taxes and some service reflation and labor cost inflation flowing through the LOE side, we expect LOEs for the industry to increase 15% y/y in 2017. Nevertheless, these likely pale in comparison to the massive increases foreseen in commodity prices.”

Overspending, long the E&P mantra, may become “cool again” as cash flows increase. Before the downturn, E&Ps were outspending cash flows by 30% between 2006 and 2013. Under the Raymond James price deck, producers may not adjust activity to overspend significantly in 2017, “however, we expect 2018’s overspend returning to 23% of cash flows in our commodity price world.”

The futures strip today is hovering around $56-57/bbl for 2017. Meanwhile, E&P budgets were being finalized over the past two months.

“While our model would point to budgets being quite a bit higher, we expect industry-wide initial budgets to potentially call for increases in capex of 60%,” wrote the Raymond James analysts. “However, if oil prices follow our trajectory, and average $65 in 1Q2017, E&Ps will likely be scrambling to increase activity, and as such in our commodity environment we could foresee U.S. E&P capital spending also doubling in 2017!”