Capital spending by exploration and production (E&P) companies likely will continue this year at a fairly modest pace but analysts foresee expenditures rising in 2022 from strong cash flow and tighter oil and gas supply. 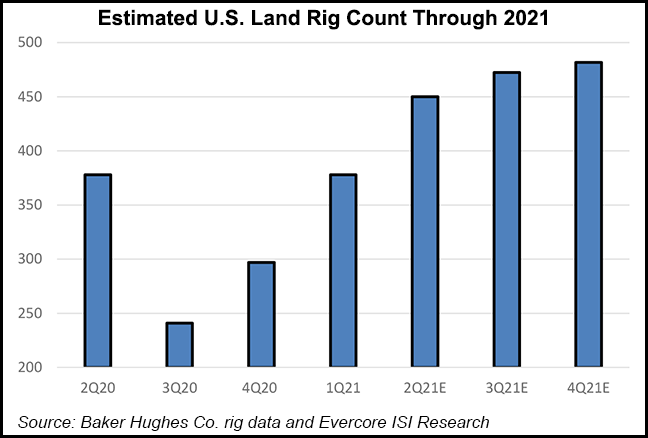 A revival in global capital expenditures is underway following the downturn of 2020, but producers are remaining disciplined in their financial outlays, Evercore ISI analysts noted.

However, a continued “supportive commodity price backdrop” should result in a boost in spending for 2022.

North American E&P capex in 2022 “could be up by as much as 20% year/year,” said the Evercore analysts led by James West. “The upstream is poised to generate strong cash flow and when budgets reset early in 2022, large operators will increase their drilling and completion activity.”

The Evercore analysis coalesces with the 2Q2021 survey of energy executives by the Federal Reserve Bank of Dallas. E&P and oilfield services (OFS) executives working in northern Louisiana, southern New Mexico and across the state of Texas are optimistic that commodity prices will continue to climb this year, along with activity.

Global E&Ps are expected to generate record-breaking free cash flow (FCF) this year as commodity prices rise, according to an analysis by Rystad Energy.

Upstream FCF, excluding financing and hedging effects, is expected to reach $348 billion this year. The previous high, recorded in 2008, was $311 billion.

“A key reason for the all-time-high FCF is the turnaround in the U.S. tight oil industry,” Rystad analysts said. “Historically, this industry has struggled to generate positive returns, but this could change in 2021. We estimate that all public tight oil companies will make close to $60 billion in FCF this year, before hedging effects.”

The conventional onshore supply segment should record close to $160 billion in FCF. Deepwater and offshore shelf activities also are recovering, with each expected to achieve close to $60 billion in FCF for 2021.

Covid-19 put the squeeze on volumes, and the Organization of the Petroleum Exporting Countries also has pulled back some of its supply.

Total gross revenue for all public upstream companies is expected to increase by almost $500 billion in 2021, or 55% from 2020, according to Rystad calculations. At the same time, the investment level overall “is only expected to grow by around 2% in 2021, resulting in significantly higher profits.”

How much activity rises will depend in part on the OFS operators.

“Pricing will have to move higher in order to encourage stacked capacity to return to the market,” the Evercore analysts said. “Finding labor in a tight market might also be a lingering headwind in certain parts of the supply chain. However, oilfield service companies will benefit from the increasing demand, driving higher utilization rates and further improvements to pricing.”

For the first time since April 2020, the Lower 48 rig count recently crossed the 450 threshold, Evercore noted. The number of land rigs added during 2Q2021 mostly was up by around four rigs a week, but the count lately has been as high as nine.

According to Enverus Rig Analytics, the overall U.S. rig count as of Wednesday (June 23) had risen week/week by eight to 534. The count was up by 3% over the last month and up by around 84% year/year, it noted.

By Evercore’s estimates, the U.S. land rig count could average 549 in 2022. That would be the result of the larger E&Ps resetting their budgets higher.

With the active fracture fleet count improving, OFS operators may be scrambling to replace equipment set for retirement or that was cannibalized during the downturn.

For example, Key Energy Services LLC recently said it entered 2020 with around 850 well service rigs, according to Evercore. Since then, it has scrapped around 300 rigs and is evaluating whether to scrap another 150 over the next year.

“The last time that Key actually had 400 rigs active in the field was back in 2014. Companies have adjusted quickly to the structurally smaller North American market and are no longer keeping older, idle capacity around to meet historically higher peak demand.”