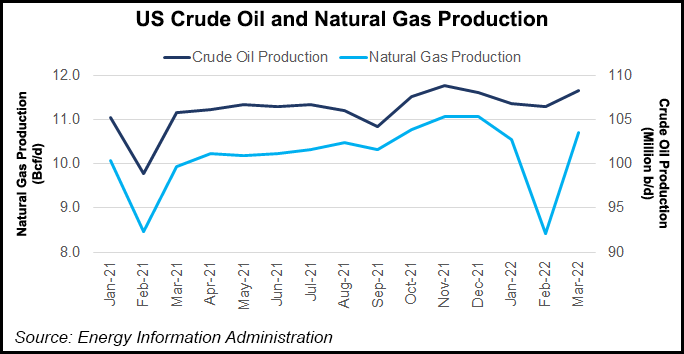 With the quarter now in the rearview mirror, a myriad of questions remains to determine the direction of U.S. activity this year by the E&Ps and oilfield services (OFS) companies. Inflation, labor and supply chain issues are delaying some activity. However, will shunning Russian gas and oil lead U.S. companies to ramp up?

“Even in the unlikely event of a near-term resolution to this crisis, the die has been cast and actions, particularly by European countries, are already underway to move away from Russian oil and gas and secure more reliable supply from the Middle East and the U.S.

“It has underscored the need for an orderly energy transition that includes oil and gas as part of all-of-the-above strategy, and has recalibrated global views as to the current and ongoing role of U.S. oil and gas in the world economy.”

Regardless of whether more Lower 48 and offshore production is in the works, it’s bound to be a banner year earnings wise for the energy complex.

First quarter results included “strong execution on buybacks and variable dividend programs,” Graf noted. The oil and gas index has risen more than 42% year to date, but “we still see a median 45% upside to our updated price targets.”

Some companies announced a bump in 2022 capital expenditures (capex) but it wasn’t necessarily tied to boosting output overall.

For example, Lower 48 powerhouse Continental Resources Inc. is hiking capex and production. The increases, though, are tied to acquisitions, with more than 600,000 net acres added to its portfolio over the past 18 months.

Most of the E&Ps that announced higher capex plans generally tied the increases to Inflation and supply chain slowdowns.

“Some producers are reluctant to increase their capex for the year, yet inflation is eating into a sizable portion of that,” said NGI’s Patrick Rau, director of Strategy & Research. “Therefore, overall production may not grow as quickly as expected. To wit: there’s been no change in Wall Street annual production estimates, despite 1Q2022 production generally coming in ahead of consensus.”

Meanwhile, the U.S. rig count has not risen in step with pricing. The domestic natural gas rig count rose one unit to 151 for the week ended last Friday (May 27), while a drop in the Gulf of Mexico count helped send the combined U.S. tally one unit lower overall to 727, according to the latest numbers from Baker Hughes Co.

What Are E&P Priorities?

Following more than three months of “persistent downward demand revisions, the market is at the precipice of a period where demand should materially outpace supply,” analyst James West of Evercore ISI said. “It is fairly remarkable to watch the strength in oil prices” even with the oil releases from the Strategic Petroleum Reserve and the lockdowns in China.

“Global demand will strengthen as the U.S. summer driving season kicks off, China starts to emerge from lockdowns and mobility increases in other parts of Asia and the world,” West said.

Still, how long can oil prices remain high while the industry remains disciplined?

“This cycle does indeed feel different as the underinvestment around the globe will prevent a fast supply response, U.S. shale has been structurally impaired, and both E&Ps and OFS companies have remained disciplined despite higher pricing and greater demand for equipment,” West said. “The summer is just starting to heat up.”

“Consistent with our expectations heading into the quarter, E&Ps have remained disciplined through the first quarter earnings season, reiterating prior plans calling for low or no production growth in 2022. In addition, inflation continues to trend higher — generally outpacing what was embedded in 2022 guidance.

“As a result, several producers made modest increases to 2022 capex plans, with higher spending tied to rising costs rather than growth (total spend plus 2%), while production guidance was largely unchanged for our coverage.”

It’s important to note, said the Morgan Stanley analysts, that “low reinvestment rates limit the impact this inflation has on FCF.” The analyst team estimated capex is only 35% of cash flow from operations in 2022, compared to an average of 125% over the 2015-2019 time period.

“As a result, free cash flow generation for the sector remains robust, with oil-weighted E&Ps offering FCF yields nearly four times the broader market in 2022 and 2023.

The upward pressure on capex budgets, the result of inflation and a tight market for OFS equipment and labor, “is picking at scabs from prior years when E&P operators would chase higher commodity prices with growth spending,” Kumar said.

“Perhaps the most discussed topic on 1Q2022 conference calls, the (potential) impacts of service costs on capex budgets, is top of mind for investors. Steel, diesel and labor have been cited as the most common drivers of higher costs, and lead times for incremental equipment and activity are in the 12- to 18-month range currently,” the Wells Fargo analyst said.

The large-cap E&P benefit from scale and “negotiating leverage,” giving them leeway to “mitigate impacts” versus their small- to mid-cap peers.

Longer term, “we think the debate around a call on U.S. growth and the response from independent E&Ps is starting to percolate in the minds of both investors and management teams,” Kumar said. “A realization that peak oil/gas demand is not behind us is likely to drive further discussion around this topic…”