U.S. oil and gas producers are likely to reduce their capital spending this year by around 8% as they remain “extremely disciplined, yes, really,” based on a global survey by Raymond James & Associates Inc. 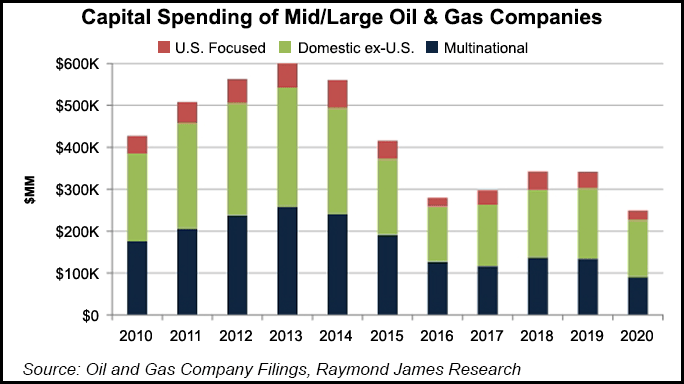 Capex plans have been on a roller coaster for the past few years. This year appears to be no different, analysts said.

“Aggregate capital spending for our global 50-company survey peaked in 2013 at $600 billion,” the Raymond James analysts noted. “This was followed by brutal austerity during 2014-2016, pushing spending down by more than half to $280 billion. Modest recovery during 2017-2019 brought spending back up to $341 billion.

The pandemic’s initial crisis last spring came early enough to give E&Ps the ability to swiftly slash capex. Total spending in 2020 came in at $249 billion, down 27% year/year and 11% below the previous trough level of 2016. U.S. spending plunged 42%, while international capex dipped by one-quarter.

“Based on the initial 2021 budget figures, which are subject to future revision, of course, our survey indicates that 2021 global spending will tick up 5% to $262 billion,” Molchanov and his colleagues said.

“This is still below the previous 2016 trough, and it equates to a cumulative drop of 56% from the peak level of 2013. To clarify, this 56% drop comprises a combination of lower activity levels, as well as lower industrywide costs. The relative proportions of these two variables naturally differ from region to region and from company to company.”

For the U.S. portion of the survey, the Raymond James team historically had conducted a top-down analysis based on prices, production and cost metrics. The analysis created a proxy for aggregate cash flow generation. The top-down review was relevant because of the U.S. industry’s fragmentation, which does not offer a clear way to track the budgets of hundreds of private E&Ps. Moreover, many multinationals have U.S. operations.

That said, the widespread production shut-ins in 2020 related to the pandemic made it impossible to conduct a top-down or year/year comparison. Using the bottom-up approach, data point to a U.S. capex decline of 8% from 2020, down for the third consecutive year.

“Here is what we find so fascinating,” said analysts. “Most U.S. E&P companies aim for lower spending in 2021, even as international budgets are mostly up. Amazingly, this means that U.S. E&Ps are being more disciplined in 2021 than their international counterparts.”

U.S. E&Ps for decades have routinely outspent their overseas counterparts. The domestic operators throughout history “had been the fastest to cut spending but also the fastest to ramp back up as the oil market recovers.”
How West Texas Intermediate (WTI) oil prices trend in the second half of this year could tell the tale on whether the U.S. E&Ps hold steady or go all in again. If WTI prices remain at or above current levels into the second half of the year, most E&Ps look to overspend their initial budgets.

“However, even then it would not be realistic for 2021 spending to get back to pre-Covid levels, given the heightened investor focus on free cash flow generation and capital discipline,” the Raymond James analyst team said.

“The longer this industrywide austerity drags on, the more bullish it will ultimately be for oil prices.”

International E&Ps are set to increase capex by around 6% this year over 2020 spend, the survey indicated. Pulling together the capex plans for operators outside the United States is complicated by tax structures and financial terms, “some of them cloaked in contractual secrecy.” The relationship between cash flow and capex also is not as clear cut as it is in the United States.

Raymond James separated the internationals into two groups. The domestic E&Ps excluded any U.S. operations, while the second group was multinationals. The domestic subset comprised E&Ps centered on one country, including, national oil companies. The multinationals include diversified operators that have their fingers around the world, including operations in the United States.

The variables differ from region to region and operator to operator. There is less clarity on capex in countries where the E&Ps are  dominated by state enterprises, especially those without public listings.

The lack of clarity, especially true of members of the Organization of the Petroleum Exporting Countries, “means that any analysis of global spending carries a limited degree of precision,” analysts noted.

Of the 50 large E&Ps that disclosed financials, 17 were generally U.S.-focused pure-plays that work in most of the major basins. Another 18 ply their skills in a single country outside the United States, while 15 are considered diversified multinationals.

Raymond James did not attempt to create pro forma estimates for companies involved in corporate buyouts that were announced in 2020.

There was one notable omission from the survey. Saudi Arabia Oil Co., aka Aramco, is the world’s largest oil producer. It began disclosing financials in 2016, but not enough historical data is available to include in the survey, which “relies on a full decade of data, going back to 2010,” analysts noted.